Advertisement
Home / India / Priyanka to Yogi: What kind of CM are you?

Priyanka to Yogi: What kind of CM are you? 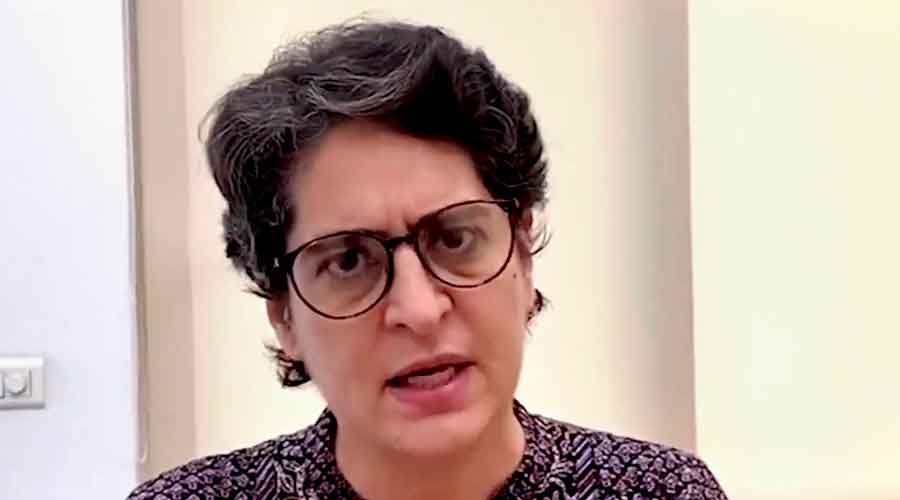 The Congress has said that justice for the Hathras gang-rape victim who died on Tuesday entails Yogi Adityanath’s removal as chief minister, referring to the monk by his original name to question his spiritual accomplishments and highlight his caste.

The party has described as a national shame the administration’s “criminal negligence” after the September 14 assault and its pre-dawn cremation of the Dalit girl’s body on Wednesday without the family’s consent or participation.

The victim’s family says the police delayed invoking rape charges, denied the brutalised girl the best treatment, and smuggled her body out of a Delhi hospital to cremate it in her village after locking the family inside their home.

“The only way to give justice to the Hathras rape victim is to sack Ajay Singh Bisht. Nothing else will suffice,” Sushmita told a news conference.

“The SIT (special investigation team) can probe the crime but what about the criminal negligence and the violation of human rights by forcibly cremating the body in the middle of the night?”

One, calling him a yogi amounts to demeaning the spiritual tradition because he hasn’t shown the required sensitivity or compassion, they said. Two, his real identity needs to be stressed because of his brazen caste politics.

Priyanka, who has instructed the Uttar Pradesh Congress to hold statewide demonstrations demanding the chief minister’s resignation, said in a video message: “The chief minister spoke on the ghastly crime today even as the incident happened on September 14. He said the SIT was constituted after the Prime Minister called. Were you waiting for the Prime Minister’s call? What were you doing for 15 days? Couldn’t even ensure proper treatment to the child? What kind of chief minister are you?”

The victim’s brother has said the police got the girl treated at J.N. Hospital of the Aligarh Medical College before shifting her to Safdarjung Hospital in Delhi on September 27. All the while, he says, the force refused the family’s demand for AIIMS admission saying no beds were available there.

“And what kind of conduct happened after the victim’s death? Who passed the order to snatch the body from the family to be burnt in that manner, after locking up the parents?” Priyanka said.

“This showed how inhumane your government is. Why was the SIT not constituted on the day of the tragedy itself?”

Priyanka had earlier tweeted: “Unbelievable inhumanity. Instead of stopping crime, you acted as criminals. You inflicted greater injuries on the family. Yogi Adityanath must resign.”

Congress president Sonia Gandhi released a video message, saying: “The Hathras incident is a blot on society. Is it a crime to be a girl, a poor man’s daughter? The victim didn’t die; she was killed by the cruelty of the government, by the apathy of the administration.”

She added: “When she was alive, she didn’t get security. After her death, she was confined to flames using the power of the police. Her body was not sent home, her mother couldn’t see her off the last time. Human existence has some dignity but that too was violated.”

Sushmita said: “Why was the body cremated in the middle of the night without the family’s approval? What was Ajay Bisht trying to hide? Why was rape not mentioned in the original FIR? Ajay Bisht has crossed all limits. The nation will be ashamed if Prime Minister Narendra Modi doesn’t sack Bisht.”

“Ajay Bisht has an anti-Dalit mindset. The RSS ideology is anti-Dalit; they want to crush the community so badly that they can’t fight for their rights. They want Dalits to live like slaves.”

Many in Uttar Pradesh feel that the total dominance of Rajputs, the caste Adityanath belongs to, in the state has created social turmoil.

“I must mention that all the accused are from Bisht’s caste. Out of 54 districts, officials from the same caste are posted in key positions in 39 districts,” Udit Raj said.

“There has been a series of incidents. The goons are all Bisht supporters. He has to be removed to end the jungle raj.”

“There is not a word from the central minister though, like the Prime Minister, she comes from the same state. She is just a drama queen; a woman of no conviction, no integrity,” Sushmita said.

“She now says rape should not be politicised. Prime Minister Modi told Delhi voters, ‘Nirbhaya ko yaad rakhna’ (an appeal to remember the December 2012 bus gang-rape victim). But now they are silent.”

Rahul Gandhi tweeted: “A Dalit daughter is raped and murdered. Facts are suppressed. And finally, the right of conducting the last rites is snatched from the family. This is unjust and humiliating.”