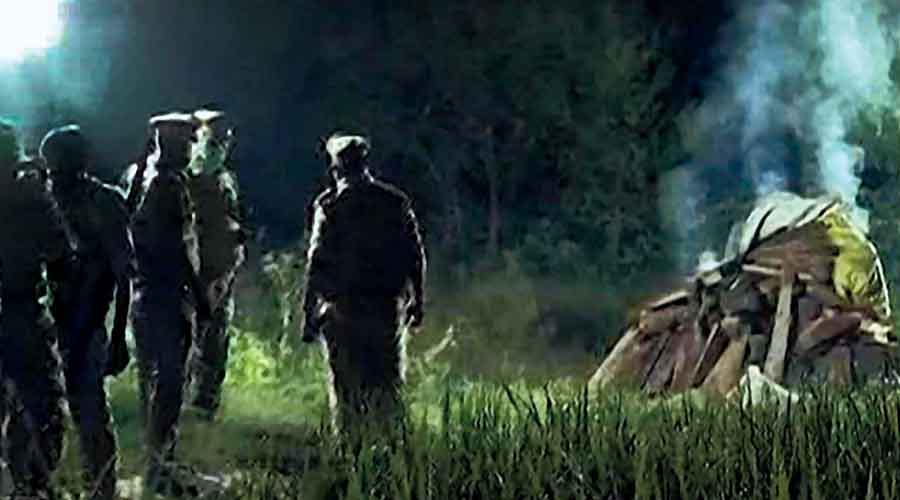 Police allegedly hijacked the body of the gang-raped and brutalised Dalit teen whose death has triggered protests in Delhi and Uttar Pradesh and cremated it without her immediate family’s participation — a tactic often followed in Kashmir with militants’ funerals to pre-empt flare-ups.

The girl’s family in Hathras district, Uttar Pradesh, said the state police had “surreptitiously” taken the body away from Delhi’s Safdarjung Hospital on Tuesday morning, brought it to their village at night, locked them inside their house and “burnt” the body at the local cremation ground.

An uncle of the 19-year-old victim said he had been standing outside the girl’s house in Champda village when “some policemen grabbed me and forcibly took me to the cremation ground and shot a video to show I had attended the funeral”.

He said that after placing the body on the pyre, “the policemen poured a liquid from a plastic container on the pyre and burnt the body”. He added that no holy water ritual or mukhagni (a fire ritual) was done.

“People were protesting at various places along the highway in Hathras. The police clandestinely cremated her, instead of handing the body over, to prevent the funeral triggering an outpouring of emotion and anti-government protests,” the victim’s elder brother said.

With the same objective in mind, Kashmir police have been refusing to hand over the bodies of slain militants to their families, and have been burying them in far-off places, sometimes with a token representation from their families.

Hathras superintendent of police Vikrant Vir said: “The police were at the cremation ground to maintain law and order. The victim’s family performed the last rites.”

Prem Prakash Meena, joint magistrate of Hathras, echoed him: “The victim’s family members were present during cremation. We have made many videos of their presence.”

The brother said he had been waiting at Safdarjung Hospital for the handover of the body after his sister died there around 4am on Tuesday. He learnt around 6am that the Uttar Pradesh police had taken the body away.

It’s not clear where the police kept the body through the day. It was at night that they arrived with the body in Champda, 180km from Delhi.

“On the way, they used force to disperse the large number of women and men from across Uttar Pradesh who had gathered on the highways in Hathras after learning the police had seized the body,” he said.

The victim’s father said: “The police locked the door of our house from outside while my wife, son, eldest daughter, some other close relatives and I were inside. They burnt her body at the local cremation ground at 2.30am.”

“We were not allowed to go. We couldn’t even see her face,” said the brother, who had registered the FIR against the four accused on September 14.

That day, the victim and her mother were collecting grass for their cattle from two distant parts of a large field when the accused allegedly overpowered the girl, gang-raped her, chopped her tongue off and broke her spinal cord, paralysing her from the waist down.

“My sister was admitted to J.N. Hospital, Aligarh, on September 15 and shifted to Safdarjung Hospital on Sunday. We had demanded she be treated at AIIMS, New Delhi, but the police said no bed was available there,” the brother said.

Sandeep Singh, Lavkush Kumar Singh, Ramu Singh and Ravi Kumar Singh — upper caste men from Champda — were arrested one by one within five days of the incident on the charge of attempt to murder. The charge has been changed to murder now.

“The charge of molestation was added on September 19 and that of gang rape on September 22,” Piyush Mordia, inspector-general of police, Aligarh range, said.

The family says the gang rape charge was added under public pressure. But Mordia on Wednesday said the reports from the Aligarh hospital “didn’t confirm the gang rape, so we have sent the evidence to a forensic laboratory”.

“The police initially ignored our request to book the criminals on the charge of gang rape,” the girl’s mother, who witnessed the last few moments of the assault after being alerted by the victim’s cries, said.

“I want the tormentors of my daughter and the policemen who are trying to save them to suffer the way my daughter suffered in hospital and died.”

The state government has formed a three-member special investigation team under home secretary Bhagwan Swaroop to probe the case. The other members are a senior police officer and a bureaucrat.

“The SIT is just eyewash. I have come to know that most SIT reports ordered by the Yogi Adityanath government never see the light of day,” the victim’s brother said.