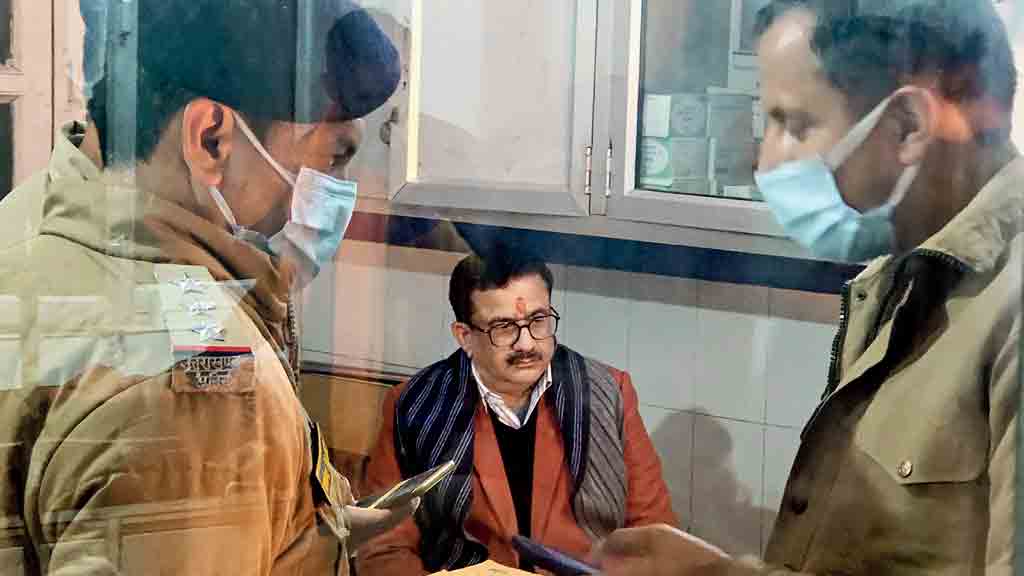 The mahant who organised the Haridwar Dharma Sansad where calls were sounded for a genocide against Muslims has begun a hunger strike on the Ganga’s banks demanding the release of the only person arrested in the case.

Yati Narasinghanand Saraswati, head of the Dasna Devi temple in Ghaziabad, has since Thursday evening been sitting on “satyagraha” in a pandal at Sarwanand Ghat in Har Ki Paudi, Haridwar, surrounded by his followers.

Narasinghanand has been known to openly abuse Mahatma Gandhi — inventor of the satyagraha, a non-violent form of protest — and extol his assassin Nathuram Godse.

On Thursday evening, police had arrested Waseem Rizvi aka Jitendra Narayan Tyagi, former chairman of the Uttar Pradesh Shia Waqf Board whom Narasinghanand had converted to Hinduism on December 6 last year.

Rizvi is accused of delivering a hate speech against Muslims at the December 17-19 Dharma Sansad. His arrest came a day after the Supreme Court issued notices to the Centre and the Uttarakhand government on their alleged failure to act against people accused of advocating genocide at the event.

“Tyagi was with me when he was arrested. I told the police to arrest me too as I am a co-accused, but they wouldn’t listen,” Narasinghanand told reporters in Haridwar on Friday. “I am on satyagraha and will neither eat nor drink until Tyagi is released.”

A video purportedly shows Narasinghanand arguing with policemen during Rizvi’s arrest, saying: “You will all die and see your children killed.”

“He (Rizvi) had while releasing a book at the Press Club on November 12 made objectionable remarks. A case was registered against him under Section 153A (promoting enmity between groups on the ground of religion),” Kumar said.

“A second case was registered against him under Sections 153A and 295 (after the Dharma Sansad) for intent to insult a religion.”

Rizvi was produced before a court on Thursday and remanded in 14 days’ judicial custody.

Yogendra Singh Rawat, Haridwar senior superintendent of police, said: “We have arrested Rizvi and summoned other accused. More arrests will be made in the next few days.”

At the Dharma Sansad, Narasinghanand had urged Hindus to pick up advanced weapons and kill Muslims to establish a Hindu Rashtra. He has since claimed that a government headed by a Muslim Prime Minister will from 2029 onwards try to eliminate Hindus.