Rajasthan Congress president Sachin Pilot says the BJP is running away from accountability and shifting the goalposts to mislead voters. Excerpts from an interview with The Telegraph. 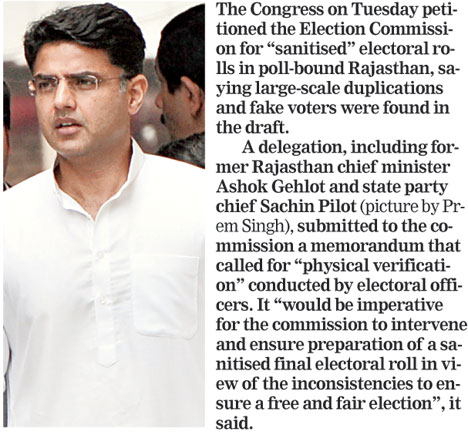 Rajasthan Congress president Sachin Pilot says the BJP is running away from accountability and shifting the goalposts to mislead voters. Excerpts from an interview with The Telegraph:

Q: The Congress is expecting a comeback in Rajasthan. Aren't you worried about the Narendra Modi factor coming into play?

A: What will the Prime Minister come for - to defend the performance of the chief minister? It is easy to go to Karnataka and say all kinds of things. But all the three states (Madhya Pradesh, Rajasthan and Chhattisgarh) going to the polls are ruled by the BJP. Their working has been pathetic. (Rajasthan chief minister) Vasundhara Raje has betrayed the mandate and let the people down badly. Will Modi defend her corruption, her betrayal? And didn't Modi campaign in Bihar and Delhi?

Q: The Congress has not been able to recover the lost ground in Madhya Pradesh and Chhattisgarh for 15 years. That's the story in Odisha, Bihar, Uttar Pradesh and Gujarat.... What is different in Rajasthan?

A: Every state is a different political landscape. We were in a very bad situation in Rajasthan, winning only 21 out of 200 seats. But we worked hard, aggressively raising people's issues for four years without a break. We focused on the grassroots, worked at the booth level and went door to door. We took every local election seriously - be it for civic bodies or any other institution. We added five lakh new members through the Shakti Project (an electronic mechanism to connect party workers with the high command).... We have created space for the Congress in people's minds. I believe those who sweat in peacetime won't bleed in war.

Q: Your answer suggests the Congress didn't work hard enough in other states.

A: No, the electoral dynamics is different in every state. In some states, our decline happened over decades. These three states cannot be compared with UP or Bihar. We have won bypolls in Madhya Pradesh and will win the Assembly (elections) this time. In Gujarat, everybody had said the BJP would get more than 150 (seats) and we stopped them below 100. We have started working on the organisation everywhere and the result will be seen now.

Q: Isn't it a failure of the party, being in perpetual decline for 20-25 years?

A: I believe election-time activity will not fetch results. You have to work continuously. Give voice to people's issues all the time.

Q: Even when the Congress raises people's issues - like you are talking of farmers, jobs and the economy now - the BJP hijacks the discourse at will, using the communal card. How will you tackle this?

A: The BJP will try diverting the attention to emotive issues but we will drag them to people's real concerns. The price of petrol, prices of other essential commodities affect people. Farmers are committing suicide, girls are being raped, people are being lynched on the streets. It is a horrific situation. It is the duty of the government to answer these questions.

Q: But what if the discourse gets centred on the NRC, Pakistan, Jammu and Kashmir and mandir-masjid? The Congress gets defensive on the question of nationalism and religion.

A: No, we are not being defensive if we don't want to politicise these issues. Religion and politics must be kept separate. Politics can't be done on who eats what, who wears what, how one prays. The Constitution is paramount.

Q: There is a perception that the Congress has lost the intellectual capacity to articulate its position on controversies having a mix of religion and politics.

A: That's not the right way to look at it. We want a discourse on the real problems of the country. We don't play divisive politics. The BJP keeps shifting the goalposts. Lynching was not part of the public discourse four years ago. We have most forcefully articulated our position. These elements get tacit encouragement and protection from some forces. In Rajasthan, one MLA, Gyandev Ahuja, speaks in favour of these elements daily. Why has the BJP not taken action against them? We want the BJP to answer on its promises and delivery. We want them to answer questions on corruption.

Q: Corruption is one issue that puts the Congress at a disadvantage. People largely believe Modi is incorruptible and the Congress is corrupt.

A: Why is the Prime Minister not answering simple questions on the Rafale deal? Rahul Gandhi is asking questions daily - you pay Rs 1,600 crore for an aircraft that was finalised for Rs 530 crore and refuse to answer questions. What about the Lalit Modi scam? Vyapam, can there be a bigger scandal? The PDS scam in Chhattisgarh... there are so many but where is the answer? You portray yourself as honest and continue to ask questions about the Congress. Your mandate is to govern the country, the Congress is in the Opposition. This is interesting - ask questions from the Congress when it is power and blame the Congress when it is in the Opposition. Answer genuine questions now - where are the jobs, who gained from demonetisation, why the ceasefire violations on the LoC, what is happening in Doklam?

Q: One question that is stuck on the Congress is about dynastic politics...

A: If somebody comes from a political family, it is not a disqualification. But everybody has to work and earn the acceptance of the people.

Q: But dynasty helps in the beginning; it offers a readymade launch pad.

A: It does. But with reputation, there is also expectation. My father (Rajesh Pilot) died years ago. I joined politics much after that. I am working among the people and they will accept or reject me on the basis of my performance.

Q: Another question that is eternal in the Congress is factionalism. There is also the talk of generational tension. In Rajasthan, there is the Ashok Gehlot versus Sachin Pilot narrative.

A: This is another tactic of the BJP, to highlight imaginary rifts in the Congress. I am a lucky president of the Rajasthan Congress who received the full support of all the senior leaders and couldn't have performed that well without their cooperation. The credit goes to all the people. And about generational change, a party that does not change with time will fall by the wayside. Separate roles are assigned to different people and we are all committed to harnessing the wisdom of our seniors.

The rift is in the BJP, which is not highlighted - Amit Shah and Vasundhara Raje could not agree on the Rajasthan unit chief for 74 days.

You show one evidence of conflict in the Rajasthan Congress, any statement made by me or Gehlotji. We are working together and we will deliver victory to the party.