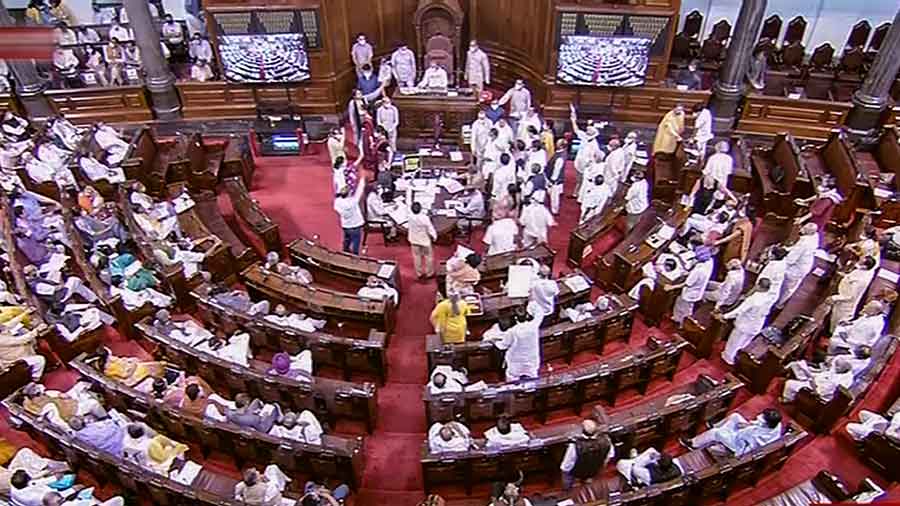 Accusing the BJP dispensation of being responsible for the logjam in Parliament, the Congress on Thursday said the government was "avoiding" discussion on the Pegasus snooping issue in both the Houses as it has "much to hide".

It also accused the BJP MPs of "collectively insulting" Parliament by their behaviour in the meeting of the Standing Committee on Information and Technology which was postponed on Wednesday due to lack of quorum.

Referring to the government's proposal of working out a solution for the smooth running of Parliament, Congress spokesperson Abhishek Singhvi said, "I am making a proclamation here, you start the discussion in Parliament today and by tomorrow we will discuss everything else. Why are you avoiding Pegasus?"

He said the government was not answering the simple question whether it had bought Israeli Pegasus spyware to snoop upon Indians or not.

"The government is not only hiding, they have much to hide, they have no answers, they have no basis for not even having a discussion inside Parliament," Singhvi told reporters.

"The government is avoiding a discussion in Parliament as it knows that we will pin them down."

The Congress spokesperson claimed that he does not understand how the opposition is being blamed for the logjam as it is clearly the government that is avoiding a discussion on the Pegasus issue inside Parliament whereas many countries have ordered investigations into the matter.

Parliament has failed to transact any business due to opposition uproar over the Pegasus and farmers issues ever since the Monsoon Session started on July 19.

Singhvi alleged the government is "feeding the media blaming the opposition on the current impasse in Parliament because it wants to avoid the real answer on whether it has acquired Pegasus and whether it uses it against any person".

That is the only question that is relevant, he said.

"Did you acquire Pegasus software and did you use it against anyone? If yes, please disclose their names. This question can be answered by yes or no," he said, adding the government has instead given 10 answers alleging that this is a conspiracy and a hoax.

Referring to the lack of quorum for a meeting of the Standing Committee on Information and Technology, Singhvi said that he has never seen 10 people of the ruling party standing and saying that they are present but will not mark their presence.

A number of members of the committee sat in Parliament on Wednesday to discuss 'Citizens' safety and date protection'. However, BJP members of the panel who were present in the meeting room didn't sign the attendance register in protest leading to a lack of quorum.

"It is collectively an insult to the institution of Parliament. They are not only hiding. They have much to hide. They have no answers, no basis for discussion," the Congress leader alleged.

An international media consortium has reported that over 300 verified Indian mobile phone numbers were on a list of potential targets for surveillance using Israeli firm NSO's Pegasus spyware.

Opposition leaders including Rahul Gandhi, two union ministers -- Prahlad Singh Patel and Railways and IT Minister Ashwini Vaishnaw, businessman Anil Ambani, a former CBI chief, and at least 40 journalists are on the list on the leaked database of NSO. It is, however, not established that all the phones were hacked.