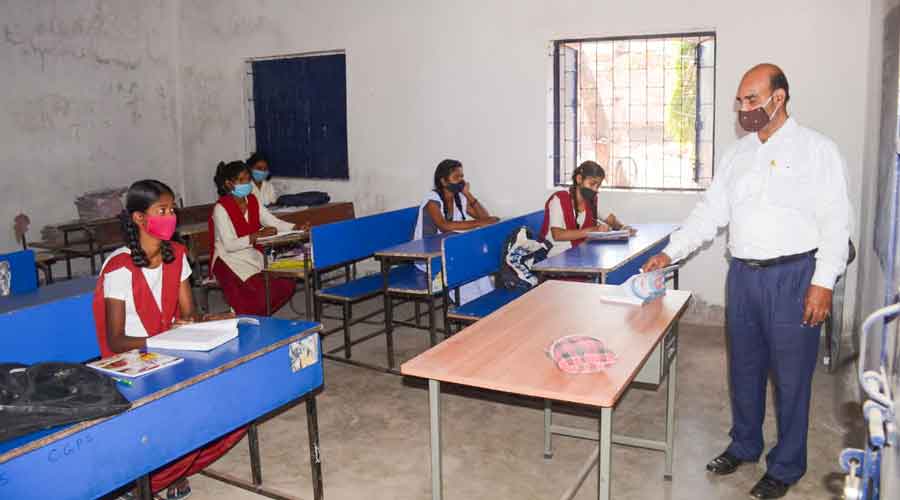 Dalit students with parental income less than Rs 2.5 lakh a year and those who have passed Class VIII or Class X from any private, government or local body school can take the entrance test.
File photo
Basant Kumar Mohanty   |   New Delhi   |   Published 13.03.22, 12:57 AM

The government plans to relocate 3,000 bright Dalit students from government schools to select private residential schools across India each year and support their education.

Some educationists and Dalit activists said a number as small as 3,000 smelt of “tokenism”, and that the government should instead improve the quality of its own schools in general and facilitate Scheduled Caste children’s admission to its premier Ekalavya and Navodaya schools.

According to a concept note prepared by the social justice and empowerment ministry, which will handle the Scheme for Residential Education for SC Students in High Schools in Targeted Areas (Shreshta), the 3,000 Dalit students will be selected through a national entrance test, to be held every year.

They will be admitted to Classes IX and XI at the best private residential schools affiliated to the Central Board of Secondary Education. The government will support their education till they complete Class XII.

A ministry official said these 3,000 students would later be eligible for the Post-Matric Scholarship and Top Class Education Scheme, which provide about 60 lakh scholarships every year to Dalit students pursuing higher education.

Dalit students with parental income less than Rs 2.5 lakh a year and those who have passed Class VIII or Class X from any private, government or local body school can take the entrance test.

The application process will start from March 14. Prime Minister Narendra Modi is likely to launch the scheme in April, the month the school session starts.

A senior academic who did not wish to be identified said: “Nearly 4 crore Scheduled Caste students are enrolled in (mostly government) schools. Providing a negligible number of students with good education is tokenism and will create a hierarchy in the Dalit community.”

He added: “Through this scheme, the government is implicitly admitting that its own schools are of poor standard. The government should improve the quality of its schools by hiring an adequate number of trained teachers and creating an accountable system of teaching and learning.”

Ashok Bharti, convener of the Ambedkar Mahasabha, an NGO that works for Dalit and tribal rights, said the relocated Dalit students might face discrimination at the private schools.

“The government may enrol, say, 10 Dalit students in one school. They will be isolated and face harassment; they may feel depressed but be unable to protest. Can these students match the standard of living of the other students? This will generate a lot of problems,” Bharti said.

“There should be a scope to admit Dalit students in addition to Scheduled Tribe students at the Ekalavya schools, while more seats should be created in the Navodaya schools to help Dalit students,” Bharti said.

“There is no logic in admitting (Dalit students) to private schools.”

The National Testing Agency will conduct the entrance test. A successful student can choose from a list of select schools during counselling.

The ministry has identified 400 private schools that have recorded a pass percentage of 75 in the Class X and XII boards in the last three years.

The ministry, which will directly release the fees to the schools, estimates an expense of about Rs 1.1 lakh a year per student, the concept note says.

The private schools are expected to conduct bridge courses for any Dalit student who lags behind in their studies after admission.