From Congress to TMC, deep misgivings 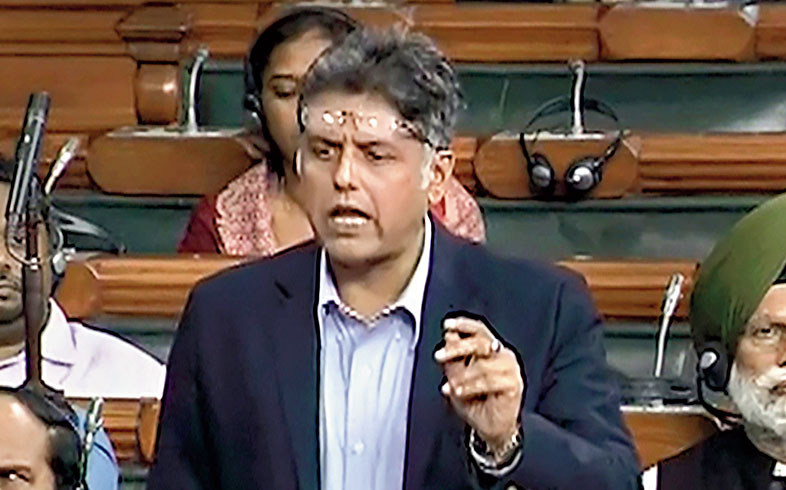 The Congress on Monday fiercely opposed the Citizenship (Amendment) Bill, condemning it as not only “unconstitutional” but “anti-constitutional”, which goes against India’s tradition and cultural ethos.

While Sonia Gandhi had firmly instructed the party at the strategy meeting on Sunday night to oppose the bill with all its might, Manish Tewari led the charge in the Lok Sabha.

Tewari explained how the legislation violated the basic structure of the Constitution, international treaties on refugees, several Supreme Court judgments as well as India’s cultural ethos. He also pointed to contradictions and the absence of logic in the bill, asking the government to draft a more rational and comprehensive law.

“The bill is unconstitutional, anti-constitutional and demolishes the principle of equality. This is violation of Articles 14, 15, 21, 25 and 26 of the Constitution. These articles say the state cannot discriminate on the basis of place, caste, religion and has to treat every citizen as equal. In the Keshvanand Bharti case, the Supreme Court said the law has to be secular. In the Bommai case, it said the concept of secularism is embedded in the basic character of our Constitution.”

Contending that the International Covenant on Civil and Political Rights, which India has signed and ratified, makes it clear that anybody seeking refuge on humanitarian grounds cannot be refused, Tewari said: “It is strange that different laws will be in force for different countries — one law for Bangladesh, one for the Maldives.”

He contested home minister Amit Shah’s claim that the amendment was within the “reasonable classification” as its basis is equality and hence there can be no discrimination on the basis of religion.

The Trinamul Congress accused the Modi government of bringing the bill only to serve the BJP’s “political hunger”. Most other Opposition members also argued that the legislation was aimed at creating fear among Muslims.

Trinamul member Abhishek Banerjee told the Lok Sabha: “The BJP does not practise what it preaches. The Prime Minister boasts of following the ideals of Swami Vivekananda, who would have been shocked today by the Citizenship Amendment Bill. This bill is not only against India’s cultural ethos but it is also delinked from the constitutional spirit. The BJP is more interested in serving its political hunger.”

The Trinamul member recalled how the BJP messed up the NRC (National Register of Citizens) in Assam and now it is doomed to repeat the disaster in other parts of the country. “How will poor people have documents prior to 1971? Many incumbent ministers do not even have their educational certificates. This is to torment the poor people and polarise the society for votes.”

Contending that the bill was brought only for the BJP’s political games, Congress member Gaurav Gogoi pointed out how the NRC excluded prominent citizens of Assam and caused distress to millions of people. “This bill will have very adverse impact on the Northeast. Our cultures, our languages are under threat. People do not have jobs and new problems are created. Old wounds are being reopened. People of the Northeast are not slaves. People are watching you with anguish.”

NCP’s Supriya Sule said: “The home minister said the bill was discussed by a joint parliamentary committee and questions regarding religion were discussed. But the JPC report did not unanimously approve the current model of the bill.” She said that the “average Muslim” today was scared and worried.

Sule said: “Why is Nepal left out? People in Nepal, Sri Lanka, Myanmar are also suffering atrocities. Please do not make anyone stateless in your own country.”

She expressed the hope that the Supreme Court strikes down the amendment.

Shiv Sena MP Vinayak Raut, without specifying whether he opposed or supported the bill, asked the government how many people had come to India from the countries included under the bill: Pakistan, Bangladesh and Afghanistan. He sought to understand the “relevance” of Afghanistan’s inclusion, and said that if Afghanistan had been added, Sri Lanka should also be included.