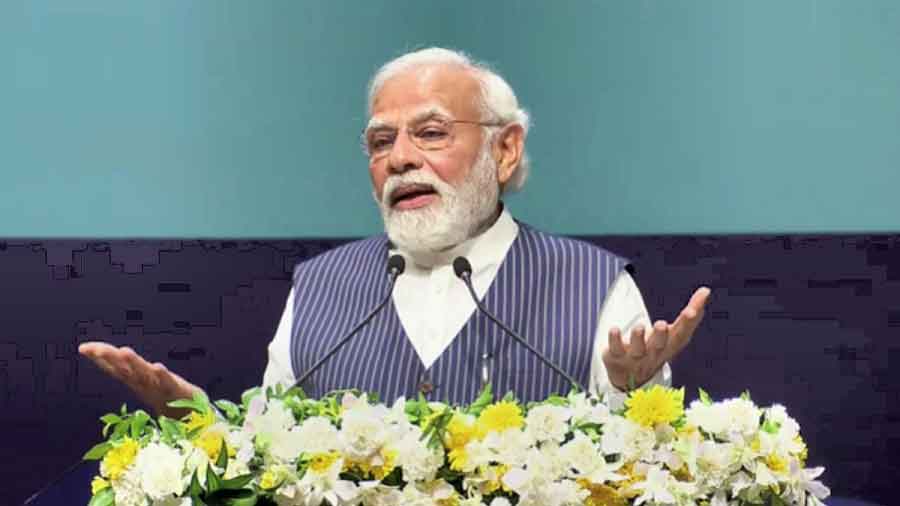 “This rewadi (bribe) culture is very dangerous for the development of the country.”

“Those who are practising this culture of bribing think they can buy the people by giving them something free…. We have to remove this rewadi culture from the country.”

If anybody thought Prime Minister Narendra Modi was addressing the frequent allegation of the BJP luring elected representatives from other parties to topple governments, they have misjudged the leader’s nobler intentions. Modi was cautioning the country’s youth against settling for freebies handed out by politicians for votes.

“Aajkal hamare desh mein muft ki rewadi baant kar vote batorne ka culture laane ki koshish ho rahi hai. Yeh rewadi culture desh ke vikas ke liye bahut ghatak hai (An effort is being made in our country these days to inculcate a culture of handing out freebies for votes. This culture of bribing is dangerous for the country),” the Prime Minister said at a rally in Katheri village of Jalaun district of Uttar Pradesh on Saturday after dedicating to the nation the 296km Bundelkhand Expressway that connects Chitrakoot to Etawah and merges with the Lucknow-Agra Expressway.

“The people of the country, particularly the youths, should be very alert of this culture of freebies. Those who believe in rewadi culture would never build an expressway,” Modi added.

Continuing with his tirade against “rewadi culture”, Modi said: “Friends, it is a challenge before new India. It can harm the new generation if we don’t deal with it now. Your present will become directionless and your future will be dark. We have to wake up now.”

Many pointed out that the governments helmed by Modi and Adityanath themselves have perpetuated the practice of handing out freebies for votes. The observers pointed to the Pradhan Mantri Gareeb Kalyan Anna Yojana, an extension of the National Food Security Act that the Modi government announced in March 2020 to help the poor tide over the pandemic but kept extending as the politically crucial 2022 Uttar Pradesh elections approached. Under the scheme, each impoverished individual receives 5kg of rice or wheat and 1kg of gram per month, in addition to the free grain given to the extremely poor families for many years.

Initially, the scheme was launched for three months but was extended several times. The last extension was in June 2022. The Adityanath government also provides 1 litre edible oil and 1kg salt per month to each poor individual.

Anil Kumar Singh, a professor of Hindi at Saket Degree College in Faizabad, said: “It was the free food grain scheme that ensured the victory of the BJP in this year’s Assembly elections. The Adityanath government also provides free smartphones and Wifi in some places. They can’t blame others for it (freebie culture).”

“Modi and Yogi are experts in implementing the rewadi culture. At the same time, they give mega packages to people like Vijay Mallya and Nirav Modi to rob our banks and escape from the country with the blessings of people in the government,” Singh said, adding that the BJP manifesto for the Uttar Pradesh polls had also promised free electricity to farmers for five years.

Delhi chief minister Arvind Kejriwal attacked Modi for criticising his rivals for helping people. “We organise free pilgrimages for senior citizens. Our women travel free in the city buses. However, the Prime Minister is cursing me for doing so,” the AAP leader said in New Delhi.

Samajwadi spokesperson Kirtinidhi Pandey said: “The government has objected to the use of certain words in Parliament which don’t suit Modi. But Modi himself is using such deplorable language in public.”

At the Jalaun event, Modi claimed the country had got its best shot at development for the first time since Independence.

“We should keep at bay whatever harms the country, obstructs development. It is for the first time in 75 years of Independence that the country has got its best opportunity for development. We shouldn’t miss this opportunity,” the Prime Minister said.