Cops broke his laptop, chased him down the stairs, hit him and he fainted 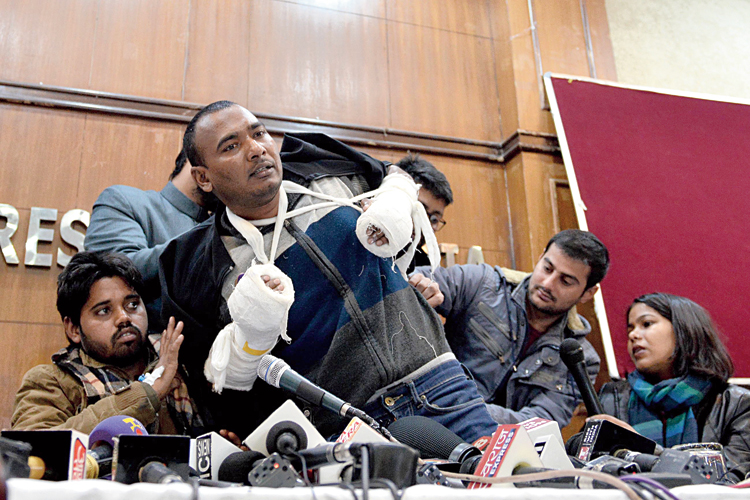 Mohammed Mustafa, MA student and aspiring civil servant, said he was sitting on the first-floor reading room at Jamia Millia Islamia’s Ibn Sina block on Sunday evening when he and others smelled the irritating odour of tear smoke.

They shut the door and remained sitting inside the room, he added.

“The police stormed in and began beating us up. I was right at the end of the room. I raised both my hands and they fractured (fingers on both hands). They broke my laptop. These chased me down the stairs and hit me and I fainted,” said Mustafa, who’s doing his MA in social exclusion.

Mustafa’s discharge note from the J.P. Narayan apex trauma centre at the All India Institute of Medical Sciences (AIIMS) says: “Rt 3rd MC # undisplaced and lt base of 5th MC # closed.” The symbol “#” indicates fracture in medical shorthand. What the report says is that Mustafa has fractured one metacarpal --- the bones running from the wrist to the base of the fingers --- on each hand.

Mustafa recounted: “When I came to, they hit me again. They chased and hit us all the way to Gate 7. They said, ‘Read the Kalma (a religious text)’. It was a direct or indirect reference that you are going to die. They said, ‘What is your problem with (Narendra) Modi and Amit Shah?’”

He added: “At 6.30pm we were brought to New Friends Colony police station. All the 17 arrested (detained) students were made to sit on the floor in the cold. I was in great pain. I said, ‘Please give me a painkiller or (some other) treatment’. They did nothing.”

Later, under pressure from the lawyers and activists waiting outside the police station, the cops took him to AIIMS at 2am and eventually released him after treatment at 6.30am on Monday.

“I was so scared that I thought I was going to face an ‘encounter’,” Mustafa said, breaking down. “Instead of winning hearts with schemes like Swachh Bharat, it (the government) is dividing hearts with such contentious bills (the amended citizenship act)….”

He added: “I used to feel that only those who go to protests face police violence. I have now learnt that even the innocent (non-participants) face violence. Those who do not protest should also come…. Since the day before yesterday, my attitude has changed because even decent people can be killed.”

Mustafa and several others spoke at the Press Club of India on Tuesday, along with actor Zeeshan Ayub and other activists.

Activist Farah Naqvi, who spent Sunday night outside two police stations ---- Kalkaji and New Friends Colony, where the student detainees had been taken ---- said the police kept the activists and lawyers out all night.

“The right to know if our young men and women are being detained is a fundamental right. Police are not our rulers…. This is unacceptable behaviour in a constitutional democracy, which I would like to remind the Indian government we still are,” she said.

“You would have got goose bumps if you saw the injured young men staggering out of Kalkaji police station when they opened the gates (in the early hours).”

Hanzala Mojibi, a BA English student, was detained with around 14 others outside the library. He is injured from the caning he received on his legs, ribs and thighs.

“I was at the front, so they took my phone first and broke it in front of me. Then they took the rest of our phones and cameras and broke them,” he said.

“One of the policemen, who I was looking in the eye, took my glasses and broke them…. There were students standing outside the mosque nearby. The police threatened that if they made any noise, we would get hit. Whenever those standing shouted at the cops not to hit us, the policemen hit us.”

Actor Ayub, who grew up near the campus, said he felt compelled to come home from Mumbai when he saw what had happened. “I am from a Hindu-Muslim family. My father is Muslim and my mother is Hindu,” he said.

“Whenever someone talks of separating people, when they say one religion is this and another is that, I feel they’re creating a fight between my mother and father. No one will tolerate this. Even my marriage is a Hindu-Muslim marriage.”

He said that since the start of the debate on the Citizenship (Amendment) Act, he was, “in my friends’ circle, for no reason, being made to feel different for having a different identity”.

“First, they (the government) targeted JNU, then they defamed Jamia and AMU. They know that if any revolution happens, the future will be built by the youth…. The way you treat the youth shows what kind of future you have planned,” he said.