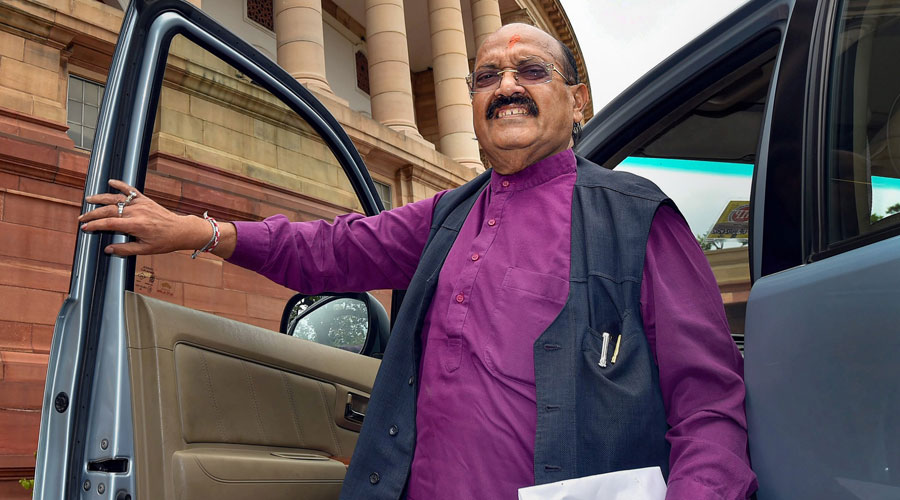 Rajya Sabha MP Amar Singh, who once wielded immense influence in power circles as a close aide of Samajwadi Party leader Mulayam Singh Yadav, passed away in Singapore where he was undergoing treatment for kidney-related ailments.

Singh, 64, had undergone kidney transplant in 2011 and was not keeping well for a long time. He was admitted to a hospital in Singapore some eight months ago.

"Amar Singh Ji was an energetic public figure. In the last few decades, he witnessed some of the major political developments from close quarters. He was known for his friendships across many spheres of life. Saddened by his demise," Prime Minister Narendra Modi said in a tweet.

Amar Singh is survived by his wife Pankaja Singh and two daughters --Drishti and Disha.

Earlier in the day, the former Samajwadi Party leader had posted messages on Twitter, paying tributes to Bal Gangadhar Tilak on his 100th death anniversary and also wishing people on Eid.

A colourful and flamboyant politician who often did not pay much heed to demands of political correctness in his interactions, including with media, Amar Singh shot into the league of political bigwigs as Yadav's confidant.

Many believed that Yadav liked Amar Singh for his cross-party and industry links, and go-getter attitude that helped his party navigate demands of realpolitik.

He is believed to have played a crucial role in swinging the Samajwadi Party's support for the UPA in 2008 after the Left parties withdrew their support due to their opposition to the Indo-US nuclear deal.

In 2015, a book by an American author claimed that Amar Singh contributed between USD 1 million and USD 5 million to the Clinton Foundation in 2008.

The author also speculated whether Amar Singh "was a conduit for other powerful interests in India pushing for approval of the nuke deal." Singh had denied allegations.

However, with the emergence of Akhilesh Yadav as the main face of the Samajwadi Party and his aging father Mulayam's control declining, Amar Singh's influence started waning.

With voices against him growing within the party, Amar Singh was first expelled from the party in 2010. Later, his name emerged in the alleged cash-for-vote scam and he was arrested in 2011.

Amar Singh did not spare even Mulayam Singh Yadav as he fought for political relevance, and he was back in favour with the party patriarch after a few years of political oblivion and was sent to the Rajya Sabha again in 2016.

During his first stint with the SP from 1996 to 2010, Amar Singh built an extensive network for the party, and was often spotted with celebrities, from the Bachchans to Anil Ambani to Subrata Roy.

But as Akhilesh Yadav got control of the party, he was expelled again in 2017.

Since then he had warmed up to Prime Minister Modi and the RSS, and announced his decision to donate his ancestral properties in Azamgarh to the Hindutva organisation.

It was he who brought actor Jaya Prada, who was once a Telugu Desam Party MP, into the SP, and she was elected to Lok Sabha from Rampur twice.

She stayed loyal to Singh and left the party with him. It was believed that the BJP named her as its candidate from Rampur in the 2019 Lok Sabha polls at his behest. She, however, lost to her bete noire Azam Khan.

In March, scotching rumours of his death, Amar Singh had posted a video titled "Tiger Zinda Hai!!" on Twitter, saying he is awaiting surgery in a Singapore hospital and would be back soon.

As compared to past medical issues, the present problem is nothing, he had said in the video shot from his hospital bed. He said once the procedure was over, he hoped to return to India at the earliest.

Conveying his condolences to the family, Defence Minister Rajnath Singh said he was saddened to know about the death of senior leader and parliamentarian Amar Singh, who was very energetic and humorous, and had friends across the political spectrum.

Tributes poured in for Amar Singh with Vice President M Venkaiah Naidu expressing sorrow over Singh's passing away at a relatively young age.

Noting that the country has lost an able parliamentarian, Naidu said,"Shri Singh was popular across the political spectrum and always strove for the uplift of the downtrodden and marginalized sections of society."

"My sincere condolences to the family of Shri Amar Singh ji. I express my deepest condolences to his bereaved wife and daughters in this sad moment," Congress general secretary Priyanka Gandhi Vadra tweeted.