Floods haunt Bihar after heavy rain in the state and Nepal

Roads have been washed away at several places in these districts, thousands of people have been forced to take refuge in higher places or leave their villages for safer areas 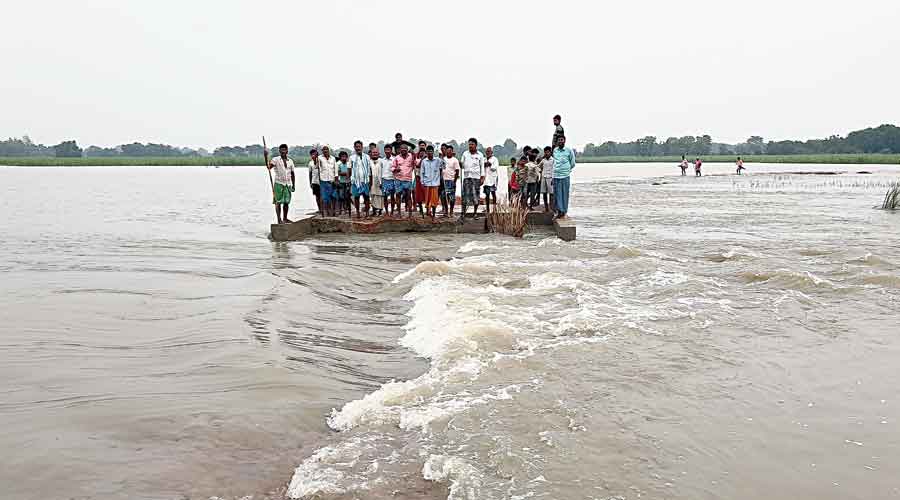 Floods returned to haunt Bihar on Saturday after heavy rain in the state and neighbouring Nepal, which has the catchment area of several rivers.

Roads have been washed away at several places in these districts. Thousands of people have been forced to take refuge in higher places or leave their villages for safer areas.

Several villages in Narkatiaganj, Bagaha, Gaunaha and other blocks in West Champaran district have been submerged. Faced with erosion and loss of property, the people complained about the district administration not providing any relief. The collectorate at Bettiah, which functions as the headquarters of the district, also went under water after heavy rain.

Floodwater was flowing over National Highway 104 at Sursand in Sitamarhi district disrupting movement of vehicles and submerging villages in the area.

On the other hand, huge volumes of water are being discharged from the Valmikinagar and Birpur barrages on the Gandak and Kosi rivers respectively, along the Indo-Nepal border.

Over 2.76 lakh cusecs was released from the Valmikinagar barrage and around 2 lakh cusecs from Birpur. One cusec (cubic feet per second) is equivalent of 28.32 litres of water passing any particular point per second.

“Both the mighty, flood-bringing rivers Gandak and Kosi are in spate. The discharge at Valmikinagar barrage is showing a rising trend following heavy rainfall in Nepal, while the situation at Birpur is also worrisome.

“The situation could worsen further as weather scientists have forecast heavy to very heavy rain in Bihar and Nepal over the next few days,” a disaster management department official told The Telegraph.

The major rivers causing floods — Bagmati, Budhi Gandak, Kamla Balan, Lalbakeya, Adhwara, Khirol and Kosi — are in spate and flowing above their danger levels at several places threatening around a dozen districts in north Bihar. The Mahananda is also in spate and fast reaching the danger level.

Alarmed over the situation, disaster management minister Renu Devi chaired a meeting of senior officials of the state government and the National Disaster Response Force (NDRF).

“Water level in several rivers are rising due to very heavy rainfall in Nepal and a few districts of our state. I have directed all the officials to stay alert and prepared to tackle floods. The government is determined to provide all help and relief to the flood-affected people,” Renu said.