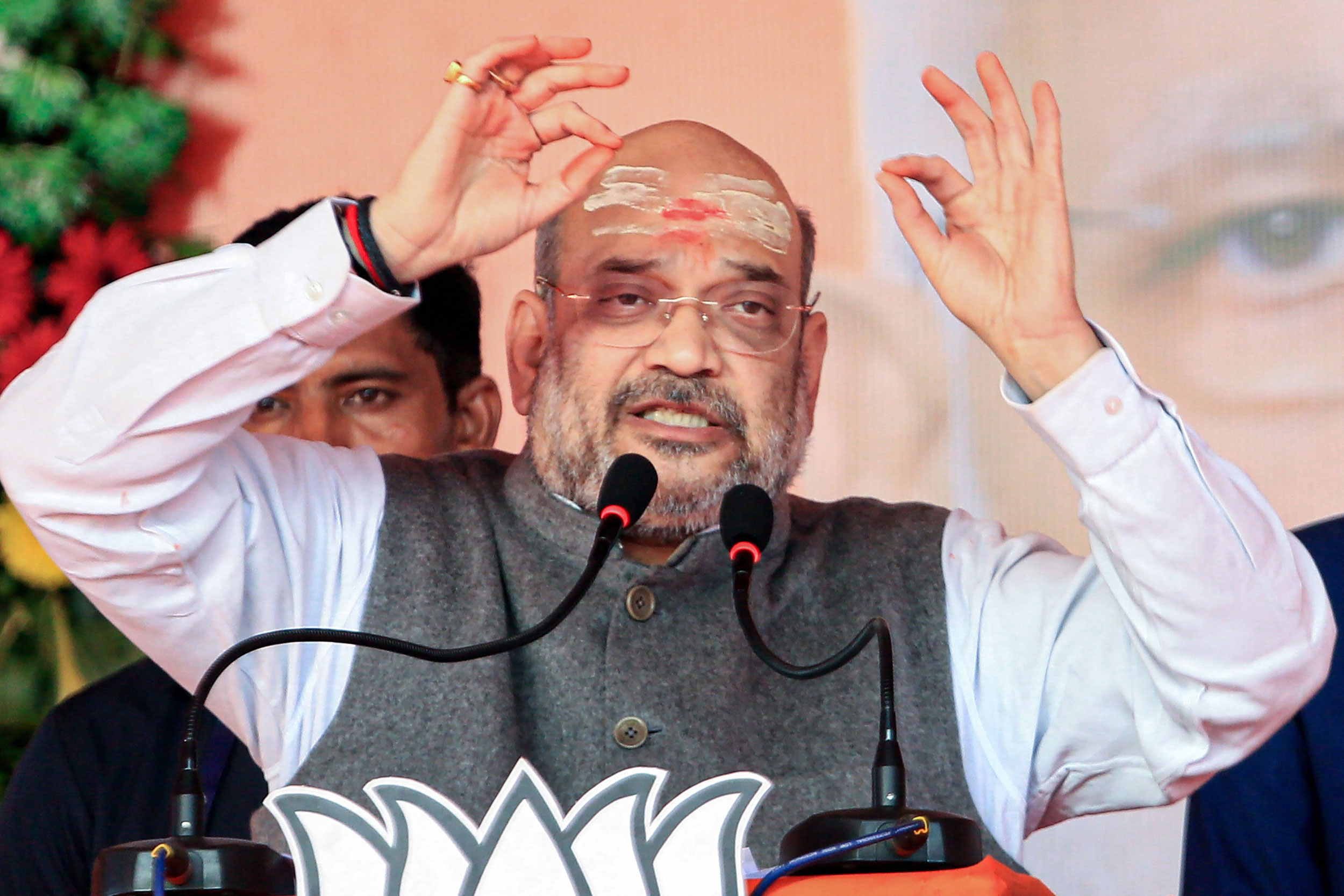 Union home minister Amit Shah has said the government is firm “like a rock” and there is “not even a little” chance of a rethink on the Citizenship (Amendment) Act.
(PTI)
Our Special Correspondent   |   New Delhi   |   Published 17.12.19, 09:21 PM

Union home minister Amit Shah has said the government is firm “like a rock” and there is “not even a little” chance of a rethink on the Citizenship (Amendment) Act.

During an interview webcast at the India Economic Conclave held in Mumbai, the minister insisted that the police crackdown inside Jamia Millia Islamia university was necessary to maintain law and order.

In the same breath, making light of the countrywide student protests, he told his interviewer Navika Kumar of the Times Now channel: “What kind of a democracy do we want, one where people don’t even protest?”

Asked whether the new citizenship law might be rolled back in view of the protests, he asserted: “Zara bhi nahi, kinchit matra sambhavna bhi nahi hai (Not even a little, there’s not even an iota of possibility).”

Asked whether he is firm that he will not compromise in any manner or go back on the amended citizenship law, Shah said: “Both I and the government are firm, chattan ki tarah atal hai (firm like a rock)… there will not be any going back….”

Shah accused the Congress of sowing fear among Muslims and inciting violence, but justified Prime Minister Narendra Modi’s recent remark that those resorting to violent protests could be identified by their clothes.

He added with a smile: “Aap video dekho aur kaho pehchan paate ho ya nahi (Look at the video footage and say whether you can identify them or not).”

Asked “Are we singling out…”, Shah quickly issued a denial: “No, no, nobody is singling out.”

He then repeated his previous comment: “Look at the video and say whether you can identify or not. The question is not about saying it or not; it’s about presenting a point of view before the people.”

Shah refused to accept that the country had been engulfed by protests against the amended citizenship law or that the nation’s students had turned against the Modi government. “The Opposition is trying to portray their protest as a students’ movement,” he said.

Shah claimed the protests had been limited to just four universities and named three, all with Islamic-sounding names.

“In other institutions (he said there were 22), some students came out only to show solidarity. In a democracy, people have the right to protest. What kind of a democracy do we want, one where people don’t even protest?” he said.

Shah justified the police crackdown inside Jamia: “If people resort to violence and damage public property, do you expect the police to keep quiet? How will the police maintain law and order?… I feel they would have failed in their duty if they hadn’t acted. How can they not act when buses are being set on fire and public property is being attacked?”

On the allegation that the Delhi police — who report to him — had entered the campus without permission from university authorities, he evaded a direct answer, saying the police would clarify later.

He, however, claimed that stones had been thrown from inside the university and that there were “outsiders” on the campus.

“Outsiders had entered the university; and now videos are coming (to establish this),” he said.

As for journalists being roughed up by the police, he said such collateral damage happened in such situations.

Shah insisted that the amended citizenship law would not harm the Muslims and accused the Congress and other Opposition parties of fear-mongering and misleading the community to incite violence.

“Those protesting should first read the (amended) citizenship act. There is nothing against any community,” he said.

He said the National Register of Citizens would be implemented across the country but refused to set a timetable. “When we take a decision, we’ll let you know,” he said.

Muslims, who are citizens of India, have nothing to fear from the NRC, he asserted.

Shah kept repeating that the citizenship law amendment was necessary because the country had been partitioned on the basis of religion.

Told that many chief ministers had refused to implement the amended citizenship act in their states, Shah said they were merely doing politics and could not refuse to enforce central laws.