'We are neither traitors nor terrorists' 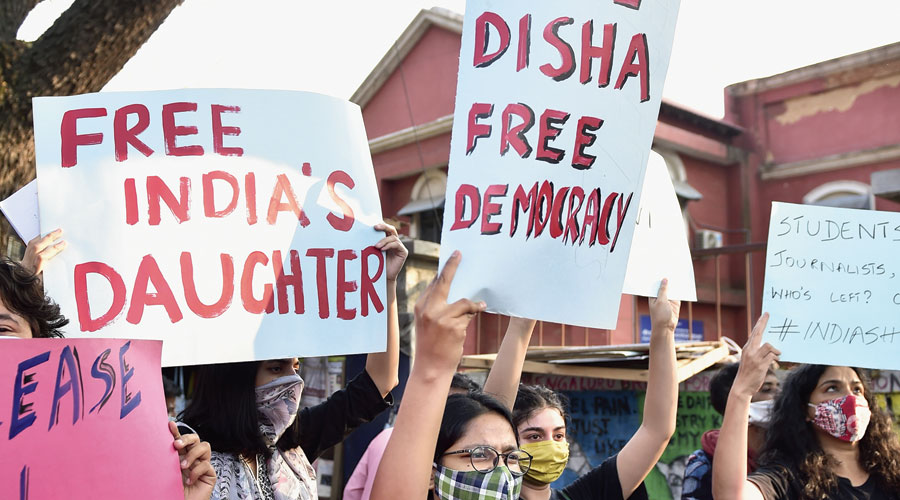 Fear seems to have engulfed the community of youth climate activists after the weekend arrest of Disha Ravi and the issuance of non-bailable warrants against two others in the social media “toolkit” controversy.

Many of Disha’s peers are afraid even to protest the arrest of the 21-year-old, accused of sedition for allegedly being an “editor and key conspirator” behind a toolkit that purportedly facilitated participation in the Republic Day farmers’ parade in Delhi.

“The situation is frightening. We are neither traitors nor terrorists, just young citizens trying to create awareness on environmental issues. We are not doing anything against our country,” a Bangalore-based activist of the Karnataka wing of Fridays For Future (FFF), with which Disha was associated, told The Telegraph on Monday.

“We are unable to take a call on protesting Disha’s arrest or even on consulting a lawyer on what to do next because most of the volunteers are scared,” the activist, who declined to be named, said.

Delhi police had on Saturday picked Disha up from her Bangalore home and taken her to Delhi, the swift and hush-hush operation described as “sinister” and “extra-judicial kidnapping” by a group of writers and activists.

The Delhi police say the toolkit was part of an international conspiracy, with Khalistani involvement, to wage war against India. The toolkit was tweeted early this month by Swedish climate activist Greta Thunberg, who in 2018 launched FFF, a global collective of students.

A Pune-based FFF activist told this newspaper her mother was extremely worried and wanted her to keep a low profile.

“Soon after Disha’s arrest my mother asked me to lie low and stay away from social media. I have never experienced this kind of a scary feeling and keep asking myself, ‘Who’s next?’” the 23-year-old activist said, declining to be named.

She said FFF’s Karnataka unit was its first in the country. “Now we are active in all the states, and most of the activists are school students seeking a better, greener and safer world,” she said.

“We are not anti-nationals, just young people who want a better tomorrow for ourselves and future generations.”

She described as “extremely dangerous” the social media trend — escalated by Disha’s arrest — of portraying activists in general as “terrorists” and “anti-national”.

“Suddenly, ‘editing’ and ‘toolkit’ are the new dirty words. I don’t understand what is wrong with editing a Google document and why they feel threatened by a simple thing like a social media toolkit, something that even international agencies such as the United Nations use to create awareness about their projects and programmes,” the activist said.

Historian Ramachandra Guha at the protest in Bangalore on Monday.
(PTI)

Google documents can be used for real-time collaboration among a group whose members can simultaneously edit it and see the changes made. The high-tech tool can be used to create text documents, slide shows, drawings, spreadsheets and surveys.

“These days every digitally empowered agency or individual uses such toolkits, which can be a strategy to run an awareness campaign on what Twitter handles to use, or when and what to share,” the Pune-based activist said.

She said large numbers of student activists had flocked to FFF during the pandemic lockdown and taken part in its campaigns.

“That’s how important technology has become in communicating with youngsters. We use all available social media platforms to hold webinars to educate children on the issues we take up.”

As accusations flew on social media against Disha, Mohammed Zubair, whose profile describes him as a co-founder of fact-checking portal AltNews, tweeted: “Disha’s parents are supporters of Narendra Modi. Imagine what’s going on in their minds when (they) see tweets by ministers and BJP officer (sic) bearers demanding #DishaRavi to be killed.”

Haryana minister Anil Vij has tweeted in Hindi: “Those who have seeds of anti-national activities in their mind must be completely eradicated. Be it Disha Ravi or anyone else.”
Zubair later tweeted a video clip, whose authenticity could not be independently confirmed, in which Disha is purportedly heard saying her parents “support him”, an apparent reference to Modi who remains unnamed.

“So, lot of the main (mainstream) press is Right-wing. So my parents support him, I don’t. Everyone who doesn’t support him is silenced in the most horrific way, and it isn’t shown by the mainstream press, so you have to go to the alternative press,” goes the audio, accompanying the image of a woman who resembles Disha.

“And even the alternative press was sued for publishing what they did. So there is next to no freedom of press in India.”

Apart from sedition, Disha faces the charges of promoting enmity between groups, provocation with intent to cause riot, and criminal conspiracy. A Delhi court on Sunday remanded her in five days’ police custody.