'If this were a party sarkar (government), it would have yielded by now, but this is a company sarkar,' Bharatiya Kisan Union leader Rakesh Tikait said 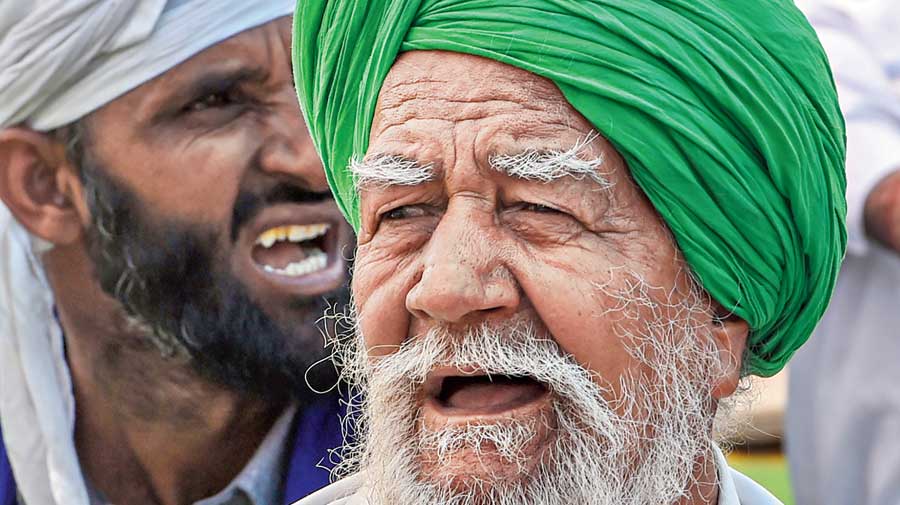 Farmer leaders on Wednesday told the community to be ready for a prolonged agitation till the 2024 general election and described the government as a “company sarkar”, an insinuation that its inflexibility on the new farm laws stemmed from its links to big business.

“If this were a party sarkar (government), it would have yielded by now. But this is a company sarkar,” Bharatiya Kisan Union leader Rakesh Tikait said in an online interaction with journalists.

The event was hosted by the Indian Women’s Press Corps on a day the farmers completed six months of agitation on Delhi’s borders.

Farmers protest against the three farm laws on Wednesday, which was observed as Black Day to mark the completion of six months of the sit-in at Delhi’s borders, at Ghazipur.
Prem Singh

The Samyukta Kisan Morcha (SKM), which is spearheading the agitation, marked the day as a “black day” as it also coincided with the seventh anniversary of Narendra Modi’s rule over India.

No response has so far come to a letter the farmers had written on Friday to the Prime Minister seeking his intervention towards the resumption of talks with the government, which broke down on January 22.

Farmers nationwide had been asked to keep in mind the Covid protocols while they observed the “black day” in their villages. But with the border picketing continuing, there were congregations where farmers sported black bands to protest not just the new farm laws but also the way the Modi government was dealing with them.

A farmer protests at the Ghazipur border.
Prem Singh

Referring to this mobilisation, Tikait said the farmers were prepared for fresh accusations from the government that they were spreading Covid.

“This is nothing new. The government has been doing this repeatedly over the past six months, sometimes trying to divide us by calling it a movement of big farmers, sometimes calling us Khalistanis,” Tikait said.

Tikait and Gurnam Singh Chaduni of the BKU (Haryana) refused to speculate on the way forward, except for saying the agitation would continue as long as it took to get the three farm laws repealed and a new law enacted guaranteeing minimum support prices.

“We did not know when we started out that this movement would go on this long. The government tried hard to break our resolve but we have not wavered. Instead, we have spread across the country from a movement initially confined to two states,” Tikait said.

An SKM statement said: “The Modi government is warned yet again that farmers are not going to retreat from this agitation until their demands are fully met. As the days and months go by, their resolve is only growing stronger, and their support base only expanding. The government can deploy its various repressive tactics, but cannot hope that the farmers will just go back home empty-handed.”

SKM leaders said their movement cannot afford to fail, as that would encourage the Centre to continue its repressive behaviour. The farmers believe their campaign against the BJP influenced the results in the five recent Assembly elections, and plan to make similar appeals to the voters of Uttar Pradesh and Uttarakhand next year to back the parties best placed to defeat the BJP.

The government is hoping to wear the farmers down while periodically vilifying the movement under various pretexts. After the farmers rejected a January offer to keep the three laws in abeyance for a couple of years, the government has made no fresh suggestions to try and break a deadlock that is technically nearly a year old as Punjab’s farmers had begun agitating last June.

Tamil Nadu chief minister M.K. Stalin has announced his government will move a resolution in the Assembly against the three new farm laws. Punjab, Chhattisgarh, Rajasthan, Delhi, Kerala and Bengal have already passed such resolutions.