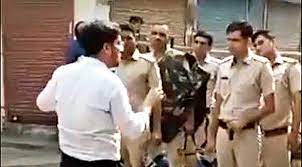 The Haryana government on Wednesday transferred 19 IAS officers, including Karnal SDM Ayush Sinha, who was recently caught on tape allegedly telling policemen dealing with a farmers' protest to "break their heads".

Sinha will now be the additional secretary of the Citizen Resources Information Department, a government order said, adding that he has been shifted against a vacant post.

Chief Minister Manohar Lal Khattar had earlier admitted that the choice of words by Ayush Sinha, a 2018-batch IAS officer, was wrong but had defended the police action.

Deputy CM Dushyant Chautala had also disapproved of his remark and promised action against Sinha amid mounting opposition attack against his government over the lathicharge on farmers.

The Samyukt Kisan Morcha, an umbrella body of farmers' outfits spearheading the stir against the Centre's farm laws, had said a murder case should be registered against Sinha and he be dismissed from service.

The Morcha had fixed September 6 as the deadline to meet its demands while threatening to lay siege to the Karnal mini-secretariat.

A Congress delegation led by the Leader of Opposition in the state Assembly, Bhupinder Singh Hooda, on Tuesday submitted to the Governor a video of the official, in which he is seen telling police to break the farmers' heads.

Submitting a memorandum, Hooda had reiterated his demand for a judicial inquiry by a sitting judge of the High Court or a retired judge into the lathicharge incident, in which around 10 farmers were injured.

Police had used force on the protesters at Bastara toll plaza when farmers allegedly tried to march towards the venue of the a BJP meeting, in which the chief minister and other senior BJP leaders from the state were present.

Meanwhile, among other IAS officers transferred include Varinder Singh Kundu, Additional Chief Secretary to Haryana government, Labour Department. He has been posted as the ACS, Employment Department.

The Haryana government also issued transfer and posting orders of one HCS officer.