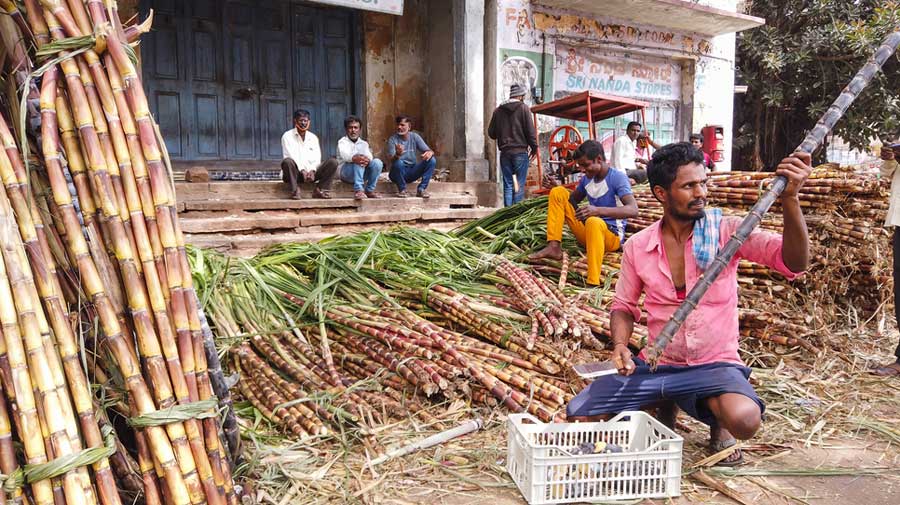 The anger has got aggravated because the farmers haven’t yet received their entire payment for sugarcane delivered to mills last year and also the stagnant prices of cane since 2018.
Shutterstock
J.P. Yadav   |   Baghpat   |   Published 25.02.21, 01:36 AM

Rambir Singh, a Jat farmer at Basi village in Baghpat district, is furious with the BJP and also Prime Minister Narendra Modi. More than the contentious farm laws, he is angry at the “arrogance” of the government.

“Ye ahankari sarkar hai. Ghamand me chur hai (This is an arrogant government. Full of conceit),” he says, pointing to the Modi government’s refusal to repeal the three new farm laws.

Omkar Singh, another Jat farmer of Shahdabbar village, slams both the Centre and the Yogi Adityanath government in Uttar Pradesh.

“This BJP government only lies,” Omkar burst out. “Modiji had promised to double farmers’ income and here we haven’t yet received last year’s sugarcane dues,” he says, pledging not to press the “lotus” button, the BJP’s election symbol, anymore.

Omkar is particularly angry with Adityanath because the state government hasn’t raised the state-advised price (SAP) for sugarcane in the past three years and also not taken any action against private sugar mills for not making timely payments. The SAP is the floor price at which private mills buy sugarcane from farmers.

“Prices of everything — diesel, fertiliser, pesticides — are going up but for our sugarcane,” says Rajpat Rathi, another farmer in the same village. “We had trusted Modi and the BJP but this government seems to be totally anti-farmer,” Omkar fumes.

The strong-arm attitude of the government while dealing with the farmers’ protest has generated a wave of anger in the districts of western Uttar Pradesh adjoining Delhi. In this region, known as Jat land, sugarcane is the principle crop.

The anger has got aggravated because the farmers haven’t yet received their entire payment for sugarcane delivered to mills last year and also the stagnant prices of cane since 2018.

It has been almost three months since the sugar season started but the state government hasn’t yet announced the SAP, probably because of a glut in the market. The last SAP three seasons ago was Rs 315 per quintal. With the new SAP still awaited, farmers delivering sugarcane to mills are receiving receipts that leave the price column blank.

The anger, however, appears concentrated mostly among the dominant land-owning Jats and the Muslims. Farmers from other communities do not reflect the same level of rage at the BJP and the Modi government.

Ankit claims that Rakesh Tikait, a farm leader who is among the driving forces behind the peasants’ movement, had supported the BJP in the last two Lok Sabha polls and also the 2017 Assembly elections and is upset now because he has not been handsomely rewarded.

More than the farm laws, western Uttar Pradesh erupted after Rakesh Tikait, son of iconic farm leader Mahendra Singh Tikait, broke into tears on January 28 after the Adityanath government cracked the whip and served an eviction notice on the farmers massed at the Ghazipur border, taking advantage of the chaos during the tractor rally on Republic Day. His tears evoked anger among Jats who viewed it as an assault on their pride and dignity.

Since then, several mahapanchayats, or congregations, of farmers have taken place across western Uttar Pradesh, aimed at firming up the resolve not to buckle under pressure and teach a lesson to the government.

Although most Jats, who constitute around 14 per cent of the population of western Uttar Pradesh, exhibited anger against the government, many say that barring the farmers’ issue they don’t have any complaint against Modi.

“Hamara to bas ek maang hai, MSP ka guarantee kardo. Baki kanoon se matlab nahi (I have only one demand, give guarantee for MSP. The rest of the laws, I’m not bothered),” says Omvir Singh of Basi village. Apart from the repeal of the three laws, the peasants’ unions are demanding a legally guaranteed minimum support price (MSP) for crops.

Omvir feels that many rumours and lies are being spread against the farm laws. “Ye afwah hai ki company zameen le legi (It’s a rumour that companies will take over farmers’ land),” he says. “How can somebody else take my land?”

Asked whether he too will not vote for the BJP if his demand for legal guarantee on MSP is not fulfilled, Omvir refrains from a direct reply. “Woh toh dekhenge jab chunav aayega (I will take a call when election comes),” he says and goes on to hail Modi, saying that barring the farm laws he has no complaint against the government.

Although the wider sentiment is of anger against the Centre and the state government, there are also voices like Omvir’s in the Jat community who are with the farmers’ protest but haven’t yet turned against the government.

In Loiya village near Meerut, Zeeshan Ahmed, a farmer and RTI activist, shows his Bharatiya Kisan Union identity card. He says that though he supports the farmers’ movement led by Rakesh Tikait, he hasn’t yet found time to go to Ghazipur.

Zeeshan says his village is dominated by the Gujjars and they are not very keen about the protest despite being dependent on agriculture.

“The Gujjars feel this is a Jat protest and so why should they join?” Zeeshan says. “Many Muslims too feel that Jats are seeking their help only because they want to show their strength,” he adds.