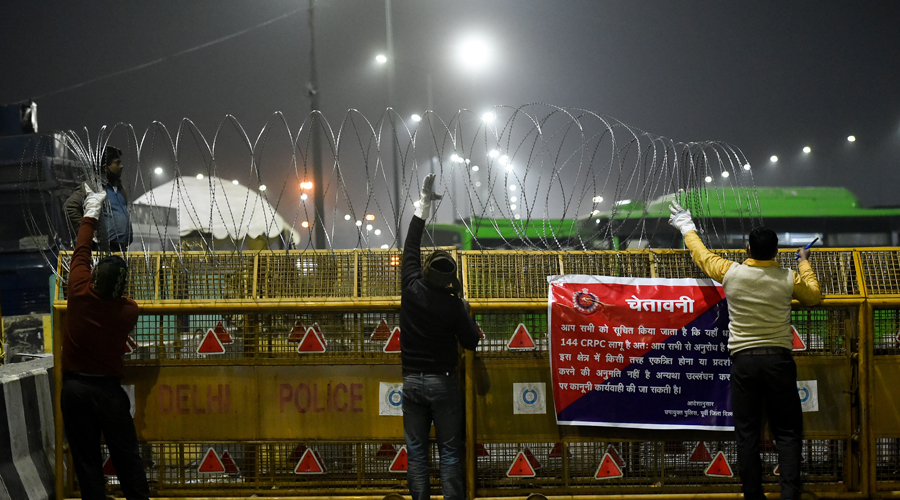 According to the Ghaziabad administration, senior officials and police officers are regularly monitoring the situation at the Ghazipur border.
PTI Photo
Our Bureau And Agencies   |   Ghaziabad   |   Published 31.01.21, 03:51 PM

Hundreds of farmers, who reached a key protest site on the Delhi-Meerut highway in Ghazipur on the national capital's border with Uttar Pradesh, danced to upbeat tunes overnight as more supporters continued to pour in on Sunday.

Security measures were strengthened with multi-layer barricading and barbed wires coming up on both sides of the highway stretch that has become the Bharatiya Kisan Union's (BKU) camping site since November 28 last year in a major farmers' stir over three new farm laws of the Centre.

Farmers reached the Ghazipur border from western Uttar Pradesh, Haryana, Rajasthan, Uttarakhand as a turban-clad Rakesh Tikait led the charge for the BKU, the appeal of which coupled with a clarion call from a January 29 "mahapanchayat" of farmers in Muzaffarnagar has re-energised the stir, which was fast losing its sheen and momentum after the Republic Day violence in Delhi.

According to the Ghaziabad administration, senior officials and police officers are regularly monitoring the situation at the Ghazipur border.

Vehicles proceeding towards and coming from the protest site are being checked while drones have been deployed for aerial monitoring at the site, officials said.

"The situation is under control and is being regularly monitored," an officer of the district administration said.

The groups of farmers camping at the site braving the cold nights were seen dancing to folk tunes and songs eulogising the nation and farmers as some young protesters carried music systems to Ghazipur on their tractor-trollies.

Thousands of farmers have been protesting at Delhi's borders with Haryana and Uttar Pradesh, demanding a rollback of the Farmers' Produce Trade and Commerce (Promotion and Facilitation) Act, 2020, the Farmers (Empowerment and Protection) Agreement on Price Assurance and Farm Services Act, 2020 and the Essential Commodities (Amendment) Act, 2020.

The protesting farmers have expressed the apprehension that these laws would pave the way for the dismantling of the minimum support price (MSP) system, leaving them at the "mercy" of big corporations.

However, the government has maintained that the new laws will bring better opportunities to farmers and introduce new technologies in agriculture.