Haryana: Death adds to outrage over lathi-charge on farmers 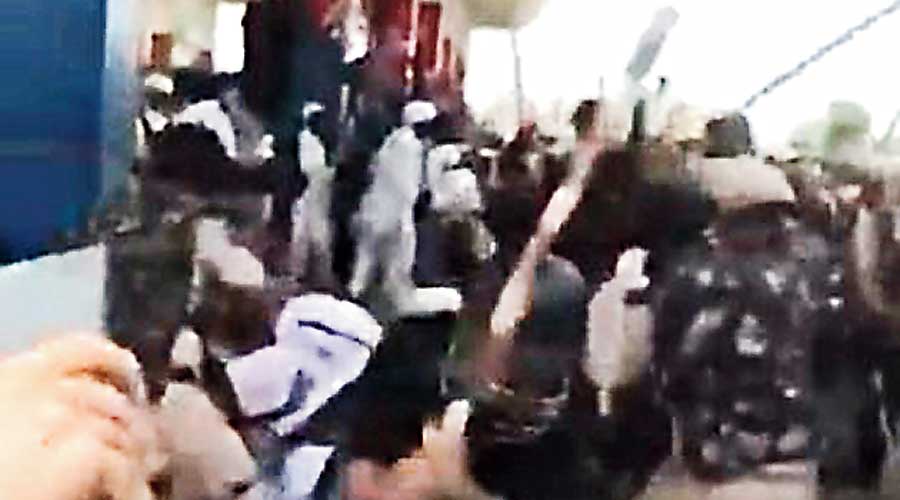 Outrage against the police lathi-charge on farmers in Haryana grew on Sunday as a farm leader equated the assaulters with “sarkari Talibanis” and the death of a farmer inflamed tempers.

Waking up to the political cost, Haryana deputy chief minister Dushyant Chautala sought to control the damage by saying action would be taken against Karnal sub-divisional magistrate Ayush Sinha, who was purportedly caught on camera asking the police to break the heads of the protesters.

“The use of such words by an IAS officer for farmers is condemnable. Definitely, action will be taken against him,” Chautala, leader of the JJP that shares power with the BJP in Haryana, said on Sunday in response to questions from journalists.

In sharp contrast, chief minister and BJP leader Manohar Lal Khattar had defended the police and blamed the farmers on Saturday.

Later on Sunday, it emerged that Sushil Kaajal, a farmer who was said to have suffered injuries in the lathi-charge at the Karnal toll plaza on Saturday, died of a heart attack.

The death was announced by the Haryana Bharatiya Kisan Union chief, Gurnam Singh Chaduni. According to Chaduni, Kaajal, who owns one-and-a-half acres of farmland, had been participating in the farmers’ protests over the past nine months.

Karnal inspector-general of police Mamta Singh denied the allegation that Kaajal was injured in the lathi-charge.

Deplorable assault on the protesting Farmers is an attack on Fundamental Rights of every Indian … earned after innumerable sacrifices during the freedom struggle, It impinges and impedes on the spirit of the Constitution and Breaks the Backbone of India’s democracy !! pic.twitter.com/7nqmDBx3Dm

The farmer had a meal at his home in the evening and went to sleep but was found dead in the morning, Singh said. The family did not lodge any complaint, nor was any post-mortem done. The cremation was done by the family, she added.

The BJP-led Centre has been saying it has no record of deaths linked to the farmers’ months-long protest although the unions say that hundreds of farmers have lost their lives while taking part in the open-air agitation that has survived a brutal winter and a summer. The Punjab government alone has confirmed over 200 deaths among the protesting farmers.

Ramandeep Singh Mann, a commentator on agriculture who has been closely tracking the farmers’ protest, tweeted that Kaajal was injured in the police lathi-charge at the toll plaza. “He was injured on the head and body, and at night he died of a heart attack. Who will take responsibility for this?”

Mann tweeted a picture of another man with a heavily bandaged nose and said: “He is Gurjant, he suffered the brunt of the police lathi-charge yesterday, his nose was broken; but now he has lost 50% of his eyesight also. All this because Khattar was hell-bent on not having his program in Chandigarh, but in Karnal, where he knew farmers will oppose his program.”

The All India Kisan Sabha has already given a call to its units to organise demonstrations across the country against the high-handed manner in which Haryana police had treated agitating farmers even as Punjab farmers took to the streets on Sunday in solidarity with the Haryana farmers.

Addressing a meeting at Nuh in Mewat of Haryana, Rakesh Tikait of BKU said that if farmers were called Khalistanis, officers who ordered brutal action against farmers could be called “sarkari Talibanis”.