The SKM said that two days before the monsoon session begins, a letter will be served to all Opposition MPs asking them to protest inside the House 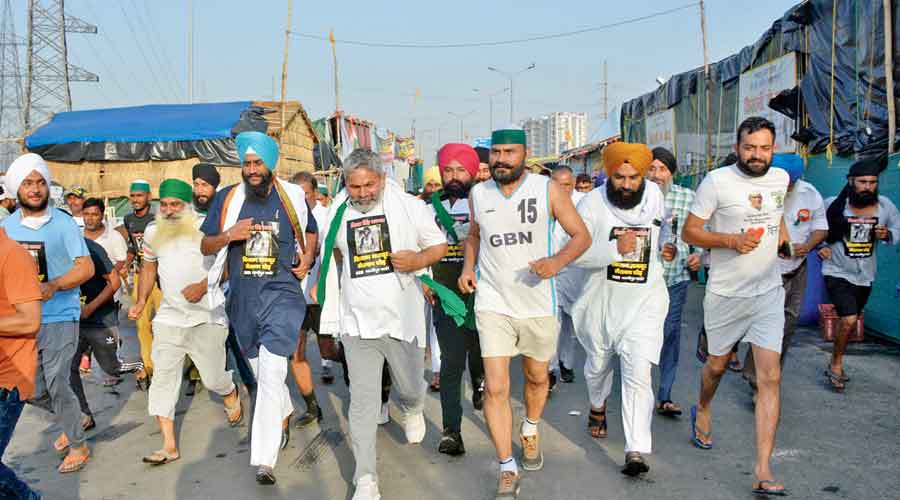 Bharatiya Kisan Union spokesperson Rakesh Tikait and other farmers participate in a marathon organised by Kisan Ekta Morcha in the memory of Milkha Singh at Delhi’s Ghazipur border on Sunday
PTI
PTI   |   New Delhi   |   Published 05.07.21, 01:17 AM

Around 200 farmers will protest against the three new farm laws outside Parliament every day during the monsoon session, which begins from July 19, the Samyukta Kisan Morcha announced on Sunday.

The Morcha, an umbrella body of over 40 farmer unions that is leading the agitation, said that two days before the session begins, a “chetavani patra” (warning letter) would be served on all Opposition MPs asking them to protest the laws inside the House.

“We will ask the Opposition MPs on July 17 to raise the issue every day inside the House while we sit outside in protest,” farmer leader Balbir Singh Rajewal told a news conference.

“We will tell them not to benefit the Centre by walking out (of the House). Don’t let the session run till the government addresses the issue. We will be protesting outside Parliament continuously till they hear our demands.”

Rajewal said five people from each farmer union would take part in the protest.

The Morcha has also called for a nationwide protest on July 8 against the rising prices of petrol, diesel and LPG cylinders. It has asked people to come out and park their vehicles along state and national highways from 10am till noon.

“Whatever vehicle you have — tractor, trolley, car, scooter —just bring it to the nearest state or national highway and park it there. But don’t create a traffic jam,” Rajewal said.

He also appealed to people to “blow the horn of their vehicles” for eight minutes from noon, and asked that LPG cylinders be brought to the highway protest.

“I ask all the women to bring their gas cylinders to the roads and be a part of the protest,” Rajewal said.

Asked about agriculture minister Narendra Singh Tomar’s statement that the government was ready to talk to the farmers, Rajewal said the protesters “will not talk with conditions”.

“The (government) leaders want to talk about farm laws with conditions; we are ready to talk with them but only if they agree to repeal the laws,” Rajewal said.

On July 1, Tomar had made it clear that the government was ready to hold talks with the protesting farmers except on the demand for repeal of the contentious laws.

Protesting farmers have been camping at Delhi’s borders since November, demanding the repeal of the three new laws and the enactment of a law guaranteeing minimum support prices for crops.