Advertisement
Home / India / Centre cold, farmers signal Republic Day parade
'Either repeal or use force on us to evict us' 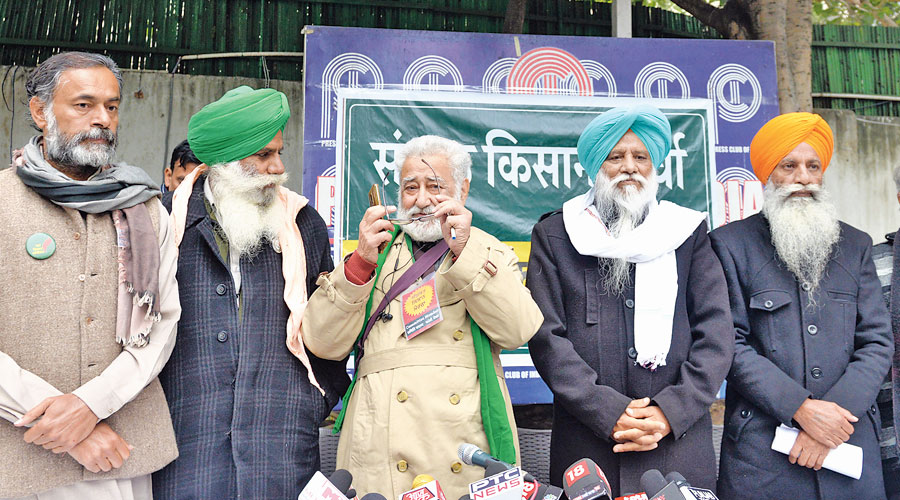 The protesting farmers have served an ultimatum on the Narendra Modi government, vowing to march into Delhi on January 26 and stage their own Kisan Gantantra Divas Parade without disrupting the official showpiece event if the three new farm laws are not repealed.

The farmers, picketing the national capital’s borders for the past 38 days, made it clear their movement would remain peaceful and that there would be no going back. They added that they had lost faith in the Prime Minister’s words.

“Either repeal the three central farm acts or use force on us to evict us. The time has come for decisive action here and we have chosen January 26 because Republic Day represents the supremacy of the people and also because we would have demonstrated patiently and peacefully at Delhi’s borders for two full months in extreme weather conditions by then,” the coordination committee of the Sanyukta Kisan Morcha (SKM) said on Saturday.

With another farmer committing suicide — this time at the protest site on the Ghazipur border between Delhi and Uttar Pradesh — the farmers are upset that no one in the government has expressed condolences over the death of at least 50 people since the picketing began on November 26, while the BJP ecosystem has pulled out the stops to malign the movement.

The seven-member coordination committee of the SKM — the banner under which the farmers are agitating — addressed a media conference in Delhi to make the announcement.

This is the first time the SKM has held a media conference in the capital since the “Dilli Chalo” campaign brought the protesters to Delhi’s borders on November 26. The event was aimed at drawing national media attention, which has dried up in recent days — at the government’s prodding, the farmers suspect.

The announcement about a Kisan Gantantra Divas Parade (Farmers’ Republic Day Parade) comes two days after the sixth round of talks with the government, during which the administration conceded two of the farmers’ lesser demands while refusing to budge on the main demands -– repeal of the new farm laws and promulgation of a law guaranteeing a minimum support price.

“Only 5 per cent of our demands have been met, and even on that we have not got anything in writing,” Yogendra Yadav of the Jai Kisan Andolan said at the media conference.

The ultimatum comes amid attempts by the government to project the acceptance of the lesser demands as meeting the farmers halfway.

However, the SKM has, since the conclusion of the sixth round of talks, made it clear that while the ministers were more accommodating and less patronising at the sixth meeting, the agitation will continue because no headway has been made on the main demands.

Add to this that even after two-and-a-half days, they have not got anything in writing from the government on its assurance on the stubble burning ordinance and the Electricity (Amendment) Bill.

“The farmers have lost faith in Prime Minister Narendra Modi’s words,” said Rajinder Singh of Kirti Kisan Union (Punjab), pointing to the way in which big-ticket decisions packaged as silver bullets had ended up causing a lot of misery to the people. In particular, he cited the demonetisation and the GST, adding that the Prime Minister had lied when he said the Swaminathan Commission formula on the MSP had been implemented.

On the cases in the Supreme Court, farmer leader Balbir Singh Rajewal underlined that it was not the SKM -– an umbrella organisation of 500 farmer unions and collectives – that had gone to court. “The government has used its sources to get others to approach the court. We will await the verdict before deciding our future course of action.”

This apart, the SKM has asked farmers to step up pressure on all the BJP’s allies across the country to take a stand on the issue. Ashok Dhawale of the All India Kisan Sabha said all the state Assemblies should pass resolutions against the three laws to show their support for the farming community, which still accounts for 60 per cent of the population.