When a journalist reaches out to protesters, many of them prefer either not to speak or to question why they are labelled as Khalistanis, terrorists or Maoists 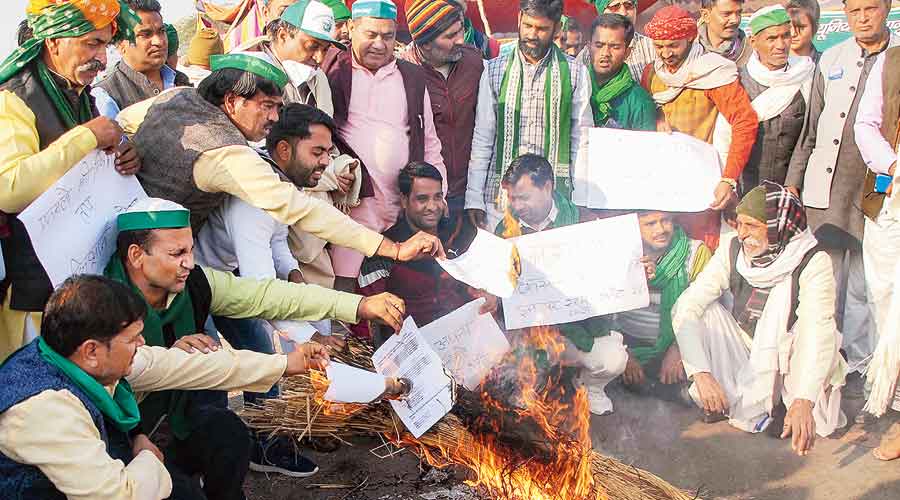 At the farmers’ protest, the media is an antagonistic force, like the Modi government and corporate houses.

“Godi media” is a term used by critics to refer to a brand of pliant journalism that has taken shape over the past few years, unquestioningly toeing the line of the government and running vitriolic campaigns against those who speak up against the administration.

The farmers’ anger at the coverage by sections of the media of their protest is palpable. When a journalist reaches out to the farmers, many of them prefer either not to speak or to question why they are being portrayed as Khalistanis, terrorists and Maoists.

The farmers’ lack of trust in the media can be gauged from the experience this correspondent and photojournalist Prem Singh had on Saturday. Several groups of farmers at different places at the dharna site not only grill us about the negative coverage in sections of the media, but some of them also snatch our camera and accreditation cards. When a protester sees “Government of India” written on my accreditation card, he snatches my notes and tears them.

For many of the agitating farmers, media means a single entity. Some of them lose patience when this correspondent asks them about their mode of protest and their objections to the farm laws.

Sukhjeet Singh, a farmer from Chamkor Sahib village in Rupnagar district of Punjab, is seen holding a poster on which is written: ‘#Godi media: We are farmers, stop showing us as terrorists.”

“We have sacrificed our lives for the country. Now our family members are fighting on the country’s borders. Whenever there is a flood or any other calamity, they help civilians. Your media is calling us terrorists,” Sukhjeet says.

He refers to the holy teachings of Sikh Gurus on sacrifice and fighting for truth and justice. He explains that “sacha sauda (true business)” means helping the needy, which can be learnt from Guru Nanak’s life.

A farmer protests at the Singhu border
Prem Singh

Manveer Singh, who has come from Machwada Sahib village in Ludhiana district of Punjab, says the media is acting on behalf of the government.

Most of the farmers here sleep inside tractor-trollies and tents.

Inside a blood-donation camp, three youngsters have just donated blood. Gurjan Singh, a donor, asks that the media show the “good activities” carried out at the protest site.

“At least do not show us as Khalistanis,” he says.

The farmers are sitting on the road for several kilometres. But most journalists are gathered at the entry points of the dharna where police personnel are deployed.

For the farmers, Modi is entirely responsible for the three new farm laws. The slogans mainly target him among politicians.

“Only one person is rigid about these laws. He is the Prime Minister. But we are also not going back until the laws are repealed,” says Gurban Singh, a 67-year-old protester.

Some of the protesters are wearing T-shirts in which is written: “Boycott Adani products.” For them, Adani and Ambani represent the corporate face and the beneficiaries of the three farm laws.

“The corporates will make us tenants on our own land. Contract farming will remove us from our own land,” one of them says.