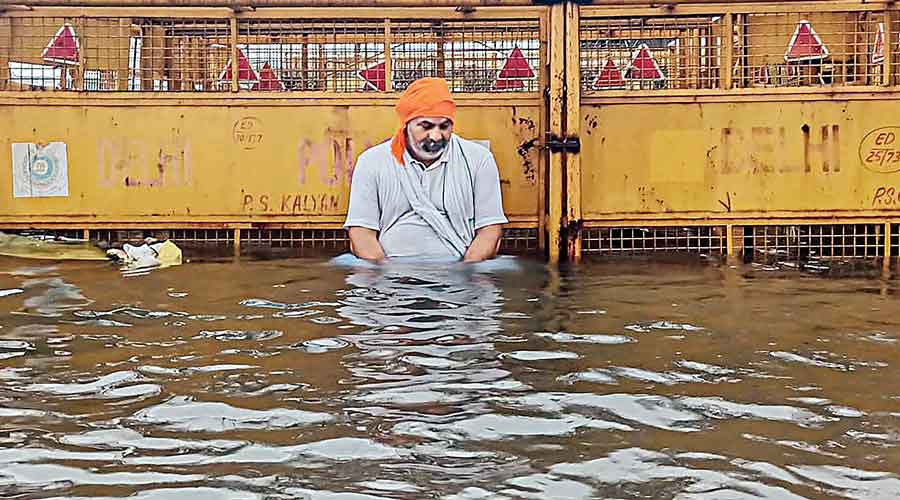 Farmers ended their gherao of the Karnal mini-secretariat on Saturday after the Haryana government agreed to send former sub-divisional magistrate Ayush Sinha on leave, pending inquiry by a retired high court judge, and promised compensatory employment to two family members of the farmer who had died, allegedly after suffering injuries in a lathi-charge on August 28.

Sinha had been caught on camera ordering police to “break the heads” of those planning a protest against the ruling BJP that day.

The breakthrough came after four rounds of talks between the farmers and the Haryana administration amid clear signals from the farming community that they were prepared for the long haul if their demands were not met. The farmers dug their heels in regardless of alleged efforts by the government to make things difficult for them.

The farmers had alleged on Thursday that the administration had lopped off trees to rob them of their shade.

However, like the farmers sitting at Delhi’s borders for over nine months —  come rain or sunshine —  the peasants at Karnal were determined to continue with their dharna till the government yielded to their wishes.

The gherao of the Karnal mini-secretariat had begun on Tuesday. After defending Sinha’s actions for the past fortnight, the government led by Manohar Lal Khattar finally blinked on Saturday morning.

On September 2, Sinha had been transferred out of Karnal and posted as additional secretary in the citizen resources information department, a decision the farmers found unacceptable.

Footage had shown Sinha instructing the police to “break the heads” of farmers if they breached the security cordon during their protest against a BJP meeting in Karnal on August 28. Subsequently, at least 10 farmers were injured in a police lathi-charge.

Elsewhere, too, the farmers’ agitation received a shot in the arm on Saturday. Some of the Olympic medallists, along with Arjuna and Dronacharya awardees, accepted the farmers’ invitation to be felicitated, braving criticism.

Bajrang Punia, hockey player Sumit Valmiki who was part of the bronze-winning team in Tokyo, and wrestler and Olympian Deepak Punia.

For the protesting farmers — called “anti-national” by the Right wing — this was a way of reminding the rulers how deep and wide their links were in society. As they often say, even the police, who are ordered to beat them up, are in effect “farmers in uniform”.

At Karnal, after the breakthrough meeting between the state government’s representative, additional chief secretary Devender Singh, and farmer union leaders led by Bharatiya Kisan Union (Haryana) head Gurnam Singh Chaduni, they addressed a joint media conference to announce the end of the gherao.

Devender, a senior IAS officer, said: “The farmers are our brothers. We have reached a respectable and amicable solution on all the demands that were raised.”

He said former SDM Sinha would remain on leave for the period during which the probe led by the retired judge is conducted.

In a statement, the Samyukta Kisan Morcha — which has been spearheading the farmers’ agitation at Delhi’s borders and had given the call to gherao the Karnal mini-secretariat — said: “The Khattar government has agreed to suspend Ayush Sinha.… There was also an agreement between the Haryana farm unions and the administration for a judicial inquiry under a retired high court judge who will look into the role of Ayush Sinha for the police violence which resulted in the death of one farmer and injury to countless others. The probe will be completed within a month.

“The government has also agreed to compensation to the family of Shaheed Sushil Kajal (the deceased farmer) and support in the form of two jobs to be provided to his family members. Compensation will also be given to the farmers injured in the violence.”