Amit Malviya: The capital is choking for oxygen because national highways leading to the city have been blocked by Andolan-jeevis 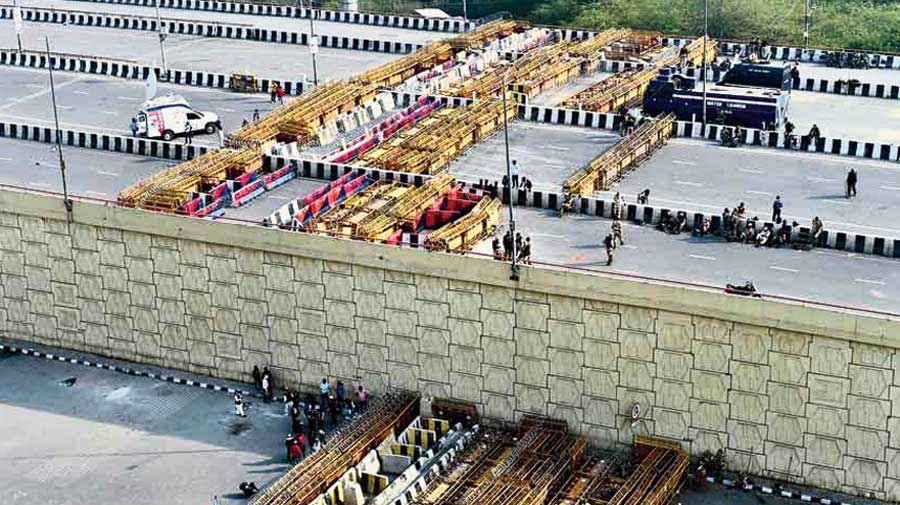 Multiple layers and levels of barricades set up at the Ghazipur border in February to cut off protesting farmers.
PTI file picture
Our Special Correspondent   |   New Delhi   |   Published 22.04.21, 01:46 AM

Farmers protesting at Delhi’s borders beat back the BJP’s attempts to blame them for the shortage of oxygen in the national capital, pointing out that while they had always kept open a lane for emergency vehicles to pass, it was the Narendra Modi government that cut off access by barricading the national highway.

“Delhi is choking for oxygen because national highways leading to the city have been blocked by Andolan-jeevis, leading to suppliers losing precious time. (Arvind) Kejriwal has been feeding these protests with an eye on Punjab elections next year. Delhi can suffer. Kejriwal doesn’t care,’’ BJP’s IT cell head Amit Malviya tweeted.

The Samyukta Kisan Morcha, under whose banner some 500 farmer organisations from across the country are protesting against the Modi government’s three laws, issued a firm rebuttal early on Wednesday.

From the first day of the protests, which began on November 26 last year, the farmers had kept open a lane for emergency vehicles to pass, it said. “Not a single ambulance or essential goods service has been stopped. It is the government that has put multi-layered barricades, not the farmers,” the Morcha asserted.

“Yes, we are protesting but not against the Covid patients, warriors or common citizens; we are against the government’s discriminatory policy on agriculture,’’ it added.

The Morcha repeated its call to the government to remove the police barricades “which is the biggest obstacle to free vehicular movement’’.

The multiple layers of barricades that the Modi government has installed at all three borders where the farmers had been protesting peacefully had earned criticism, with many pointing out that even the international borders are not as fortified. Not only had the government used concertina fencing, it had built concrete walls on the highways and fixed nails on the roads to cut off the farmer protest sites.

Before Malviya tweeted, a message purported to have been written by a company supplying oxygen claimed that the delay in supplying oxygen to Sri Balaji Hospital in Paschim Vihar on Monday was because farmers had blocked NH 24 at the border in Ghazipur.

Earlier this week, the Morcha had warned the government against trying to cite the Covid surge to evict them and pointed out that top BJP leaders, led by the Prime Minister himself, had been addressing large election rallies as the pandemic swept the country.

Even as they battled the BJP’s renewed bid to use the pandemic to turn public sentiment against them, the Morcha on Wednesday began feeding migrant labourers fleeing Delhi during the lockdown.

Farmer organisations and volunteers prepared food packets and distributed them at bus and railway stations, which saw a near repeat of the crowds in March last year when Modi had announced a countrywide lockdown at a four-hour notice.

The only difference was that this time there were buses and trains to ferry the workers because inter-state travel has not been stopped.

The Morcha also issued a detailed statement recalling what had brought the farmers to Delhi’s borders.

“Farmers have never intended to sleep on the streets and stay away from their homes and land. The government has inhumanly imposed these laws on the farmers,” it said. “The farmers are not asking for anything new, they are only fighting to save what they have. In this battle of existence, they are fighting against both coronavirus and the government,” the Morcha added.