Proposal ‘insincere’ and an insult to cultivators 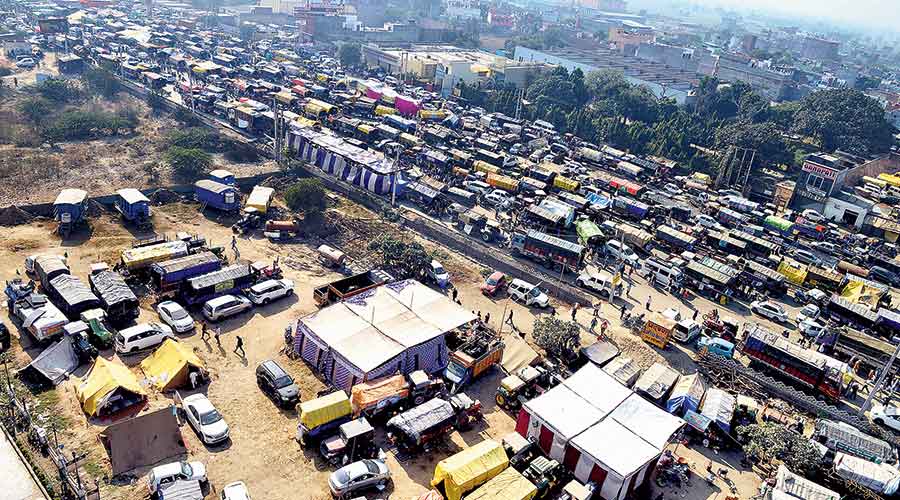 A river of trucks and tractors — home to protesting farmers for nearly two weeks — stretches for nearly 12km at the Singhu border near Delhi on Wednesday.
Picture by Prem Singh
Anita Joshua   |   New Delhi   |   Published 10.12.20, 03:19 AM

Farmers on Wednesday unanimously rejected the amendments offered in writing by the Narendra Modi government to the three contentious farm laws, calling them “insincere” and an insult to cultivators.

The farmers also do not see much merit in returning to the negotiating table without a substantial new offer. They feel the government is only maintaining a facade of accommodation without actually yielding much.

Since the written proposals were sent to them after a meeting with Union home minister Amit Shah on Tuesday, the farmers have decided to intensify the agitation by blocking the Jaipur-Delhi highway till December 12 and targeting the businesses of the Ambanis and Adanis, arguing that these two corporate houses will be the biggest beneficiaries of the three new farm laws.

In keeping with the hardening of stance, the farmers have coined a new slogan: “Sarkar ki asli majboori — Adani, Ambani, jamakhori (The government is helpless before Adani, Ambani and hoarding)”. Hoarding by the private sector has been allowed under the new farm laws.

Farmers have been advised to give up their Jio phones, SIM cards and other apparatus. Besides, establishments owned by the Ambanis and the Adanis will be picketed and their products boycotted. Also, BJP ministers will be gheraoed.

Toll plazas will be “freed” on December 12 across the country in a repeat of what Punjab farmers had done on the national highways running through the state from October 1. As part of this particular exercise, farmers will picket at toll plazas and prevent the collection of levy by allowing vehicles to pass through free of charge.

Briefing journalists at the Singhu border after the proposals reached them, farm union leaders said there was nothing new beyond what had been offered at Saturday’s meeting with the government’s interlocutors — agriculture minister Narendra Singh Tomar, food minister Piyush Goyal and junior commerce minister Som Prakash.

Detailing what transpired at the meeting called by the home minister, Shiv Kumar Sharma “Kakaji” of the Rashtriya Kisan Mahasangh told reporters that the government was now doing what it should have done before introducing the laws. “Had they held discussions before promulgating the ordinances, they would not be facing this situation.”

The amendments that the government has committed itself to in writing are those that were discussed at Saturday’s meeting during which the farmers had iterated that the three laws had to be repealed.

In the Farmers’ Produce Trade and Commerce (Promotion and Facilitation) Act, which some of the farmers’ organisations call the “Agricultural Produce Market Committee Bypass Act”, the Centre has agreed to enable state governments to collect market cess/fees on transactions outside the government mandis and allow the local administration to register the trades.

Also, farmers will be allowed to go to civil courts for dispute resolution.

In the Farmers (Empowerment and Protection) Agreement on Price Assurance and Farm Services Act (FAPAFS), billed the Contract Farming Promotion Act by farmers, the government has agreed that till the system of registering contracts by the state government is put in place, a signed copy of the contract shall be deposited in the SDM’s office within 30 days of signing. Also, the government has assured that the law will be tweaked to make it clear that farmers’ land cannot be attached under any circumstances.

On minimum support price and procurement, the Centre is not willing to go beyond a written assurance that the current procurement levels of the government at MSP will be maintained in future. The farmers have been demanding a legal guarantee for MSP.

According to Kirankumar Vissa of the Rythu Swarajya Vedika, these proposals do not address most of the concerns raised by the farmers’ organisations, particularly about removing regulations on traders and companies functioning outside the APMC mandis. In the FAPAFS law, the farmers have questioned the absence of protection for those who enter into contracts with companies.

“Thus, despite the attempt by the government to portray itself as reasonable, it is being very rigid in not addressing the key demands of the farmers, and simply playing a public relations game of trying to change perceptions,” Vissa said.

THE INSIDE ‘ANDA’ STORY

New Delhi: The mood was melancholic but the metaphor bucolic. “Murgi baithe raha, anda nahi diya (The hen kept sitting but laid no egg),” All India Kisan Sabha general secretary Hannan Mollah said on Tuesday evening, describing what transpired at the meeting called by Union home minister Amit Shah. Mollah, who has attended four rounds of talks so far, added: “They
kept saying ‘amendment’, ‘amendment’, ‘amendment’, essentially repeating what they have been saying.