The agrarian laws might have been repealed but are we any wiser about what it was that the farmers were so against, what reforms they could do with instead of the ones thrust upon them? 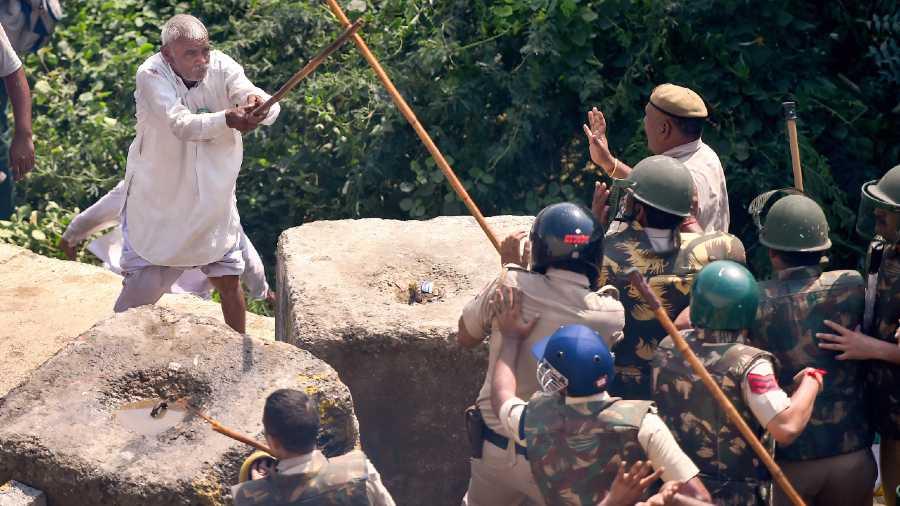 A farmer clashes with police personnel at the Delhi-UP border during the agitation
PTI
Anita Joshua   |   Published 19.12.21, 12:13 AM

Even in retreat over the farm laws, the Modi government adopted the same top-down approach it employed while bringing them in in May 2020. Pleasantly surprised as they were by the Prime Minister’s unexpected announcement, the farmers were the first to ask when was it that the Cabinet decided to repeal these laws, thus once again giving the nation a refresher course of basic school-level civics. And, when the government stonewalled all attempts by the Opposition to discuss the repeal bill in both houses of Parliament, the farmers’ disappointment was palpable. As far as they were concerned, the ruling dispensation had once again robbed them of an opportunity wherein the agrarian crisis could be discussed threadbare in the central legislature.

A debate in Parliament — as they saw it — would have helped bust some of the myths propagated against them over the past year — primarily, that they are anti-reform. And this when by the government’s own admission several states had carried out reforms as per the model Agricultural Produce and Market Committee (APMC) Act of 2003.

According to a Government of India document of 2019, 17 states and Union Territories had deregulated the marketing of fruits and vegetables, 22 states had e-trading, single trading licence and single point levy of market fee, 21 states allowed direct marketing and setting up of markets in the private sector...

“It is a myth to say that there have been no reforms in the farm sector; it has been going on for years,” says Himanshu, associate professor at the Centre for Economic Studies and Planning, School of Social Sciences, Jawaharlal Nehru University. “Agriculture being a state subject, state governments have been making the necessary changes; some more than the other,’’ he adds.

eNAM, the online trading platform for agricultural commodities in India, was a reform. “Did the farmers protest against it? APMC reforms were made in 2017. Did you see protests then?’’ Himanshu asks.

Economists and administrators also agree but contend that farm reforms have been slow and not always uniform.

The protesting farmers’ main quarrel with the farm laws was the manner in which they were thrust upon them — in bad faith as the pandemic made immediate mobilisation against the laws difficult. Also, these were not the changes they wanted. One common refrain is — “No doubt the APMCs have their flaws, but doing away with them is tantamount to throwing away the baby with the bathwater."

The government is technically correct when it says that the Farmers’ Produce Trade and Commerce (Promotion and Facilitation) Act, 2020, did not do away with the APMCs. That indeed is the letter of the law. But, the farmers were quick to cotton on to the possibility of the creation of a trade area outside the APMC without any oversight, fees or licences as a sure shot way for the withering away of the regulated mandis. And try as much as the government did with all the propaganda machinery at its disposal, this law came to be identified by the farmers as the “APMC by-pass Act”.

According to former agriculture secretary T. Nanda Kumar, this law was the most problematic of all three. Not only would it result in revenue loss for the state governments, but also there was no built-in mechanism to ensure that the farmers got paid properly in the trade areas outside the APMC’s remit.

Nanda Kumar says, “The traders can buy and scoot. There were reports of this happening in Madhya Pradesh and Telangana. Also, when you define any area outside the APMC as a trade area and where — by inference from the rules — the central government’s writ will operate, you have created a dual control system. In the whole of Bihar and Kerala — where there are no APMCs — does it mean the Centre’s rules will prevail?”

He is of the view that the whole thing should have been thought through better. “The Union government should have restricted itself to inter-state trade which clearly comes under the Union list. All that it should do is ensure that no state stops any product from moving out of it if the farmer is getting a better price elsewhere."

These details apart, the general perception within the farming community was that the laws were focused more on production and trade rather than the farmers. “What is needed is a clear focus on the producer alongside production, instead of seeing production as an end in itself wherein the producer may perish,’’ says Avik Saha of Jai Kisan Andolan.

According to Saha, the reform being sought is a legislation that ensures the implementation of the Swaminathan Commission recommendation. “All political parties swear by it,’’ he says even as he reminds that Narendra Modi too had asked for it when he was Gujarat chief minister.

On the argument that it is too heavy an expenditure for the government to bear, the Samyukta Kisan Morcha leaders have repeatedly said they are not asking the government to procure everything that every farmer produces.

The All India Kisan Sangharsh Coordination Committee had in 2018 draf-ted a private member’s bill — the Farmers’ Right to Guaranteed Remunerative Minimum Support Prices for Agricultural Commodities Bill — and tabled it in both houses of Parliament. Ashok Dhawale, president of the All India Kisan Sabha points out that the farm laws may have been the immediate trigger for the year-long agitation, but the agrarian crisis has been festering for decades now. He says, “The farm laws were the proverbial last straw.”

Dhawale adds, “If the government brings a provision that no one buys any farm produce below the MSP, it can rev up the rural economy the way MGNREGA did when it was introduced and the corporate sector will also benefit from such a move that will put money in the pockets of villagers. It will stem migration to cities and also address the problem of growing unemployment. It’s a win-win.’’

With the Opposition backing the demand for an MSP law, what is needed is the political will on the part of the BJP, farmers argue. But all that is wishful thinking; in reality no one can be quite sure of the leadership’s mann ki baat.

Essence of the three farm laws

3) The Farmers’ Produce Trade and Commerce Act: Allowed farmers to sell their produce to anyone, anywhere in India, even beyond physical markets, at competitive prices. Supported electronic trade