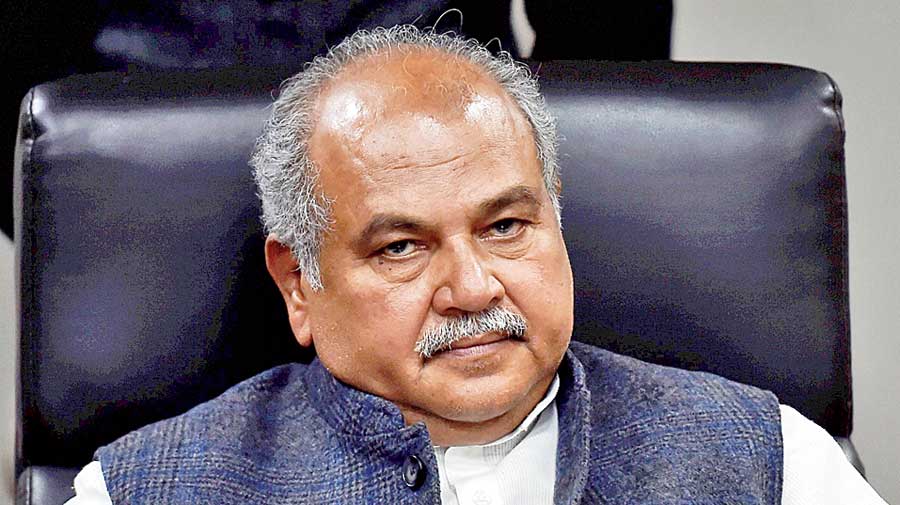 The government, which has hit a stone wall of resistance from the farmers’ unions, on Thursday switched to a direct appeal to the peasantry with an eight-page open letter from agriculture minister Narendra Singh Tomar.

The letter repeated all the official claims about the benefits of the three contentious farm laws and the conspiracy theories about the ongoing protest that is gathering steam.

The open letter, released after a meeting of the BJP leadership and senior ministers at the party headquarters on Thursday afternoon, appears to be an attempt to ensure that more farmers do not join the protest by telling them that the union leaders are being misled by political parties and also disruptive forces who are not interested in the welfare of the country.

On Wednesday, the Supreme Court had decided to form a committee to resolve the farmers’ agitation, saying the government’s negotiations would “again fail” and the dispute would “soon become a national issue” if allowed to fester.

Tomar sought to play the nationalism card by reminding farmers that the protests were happening at a time when soldiers were dealing with heightened tensions on the Leh-Ladakh border. He said that because of the protests, supplies were being forced to be ferried to the forces by air.

However, the fact is that because snow blocks mountain passes to Ladakh for at least four months every winter, the military had already moved over thousands of tonnes of supplies to the area by September itself. A Reuters report of September 16 had quoted the chief of staff of the army’s 14 Corps, Maj. Gen. Arvind Kapoor as stating: “All the supplies that we need have already been pushed to wherever they are required.”

While alleging that certain farmers’ organisations have been misled by a web of lies woven by Opposition parties, Tomar also said that the government was constantly talking to the unions to address their concerns. Though both sides have been open to talks, there has been no official contact between them for a week now.

Without referring to any specific corporate house or product, Tomar has also commented on the farmers’ call to boycott telecom provider Jio, alleging that there was a hidden agenda in the protest action at a time when the nation was working for “Atmanirbhar Bharat” and being “vocal for local”.

Soon, further evidence emerged that the government has gone into a messaging overdrive.

Its publicity arm, the Press Information Bureau, sent out bulk emails of two booklets — one on the special relationship the Modi government has with Sikhs and another on “Putting Farmers First” — to journalists. Both the booklets have been in circulation for over a week now.

Ten economists who work on agricultural policy have written a letter to Tomar, echoing the demand for repeal of the three farm laws.

“We do believe that improvements and changes are required in the agricultural marketing system for the benefit of millions of small farmers, but the reforms brought by these Acts do not serve that purpose. They are based on wrong assumptions and claims about why farmers are unable to get remunerative prices, about farmers not having freedom to sell wherever they like under the previously existing laws, and about regulated markets not being in the farmers’ interests,” the letter said.

Detailing their reasons, the economists said amending a few clauses of the three laws would not be sufficient to address the concerns of the farmers, calling for a repeal followed by wider discussions with all stakeholders on the measures needed for equitable and sustainable growth of the sector.

The protesting farmers are sticking to their guns despite the bitter cold, demoralising deaths of protesters and the efforts being made by the government to stop further mobilisation.
In a statement, the All India Kisan Sangharsh Coordination Committee, which had given the call for the “Dilli Chalo” protest action, said: “The central government is coming up with new spins every day to discredit and denigrate the very people who have elected it and given it the right to govern.

“This is unacceptable in democratic India. The grammar of democratic governance must be articulated by the government and constitutional institutions like courts exist for checks and balances, not as replacement of the obligations to be performed by the political executive,” the statement said.

The farmers’ unions refused to comment on the Supreme Court’s observations in the case, maintaining that they would speak only after consulting their lawyers.