Uttar Pradesh chief minister Yogi Adityanath is weaving the BJP's agenda for the 2019 Lok Sabha polls around the cow. 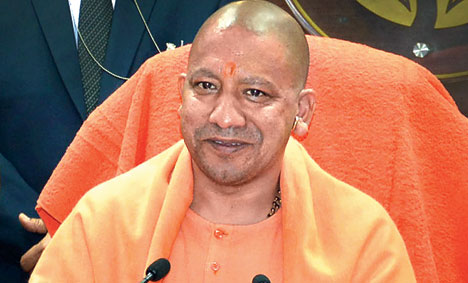 Lucknow: Uttar Pradesh chief minister Yogi Adityanath is weaving the BJP's agenda for the 2019 Lok Sabha polls around the cow.

From promising "two cows of good breed" to every poor farmer in Uttar Pradesh to asserting that he had "broken the backbone" of bovine smuggling to Bengal to pledging to build a cow-based economy, Adityanath, one of the BJP's most sought-after campaigners, has set the tone for the elections next year.

Political observers said that by referring to Bengal, Adityanath had made it clear that he was not focussing merely on retaining the BJP's 73 seats in Uttar Pradesh but also do well in states where the party had fared badly in 2014.

"We are discussing how to get the adequate number of cows (for distribution among poor farmers)," the chief minister said in Vrindavan on Sunday.

Adityanath hoped that the use of cow dung cake as cooking fuel would increase in rural areas, reducing farmers' dependence on LPG.

Broadening his political plank beyond the cow belt, the saffron-clad BJP leader said: "The cattle smugglers of Uttar Pradesh used to supply cows to slaughterhouses in Bengal. I have disrupted this nexus by breaking the backbone of the smugglers in the state (Uttar Pradesh)."

The political observers said it was not only Uttar Pradesh, which has the maximum number (80) of Lok Sabha seats in the country, that Adityanath was eyeing for 2019 with the cow as a plank.

He is also looking at the 42 seats in Bengal, where the BJP had won just three in 2014 and where the party has improved at the cost of the Left in subsequent elections.

After laying the foundation of the Mahamana Gau-Gram Scheme and unveiling a statue of RSS ideologue Deen Dayal Upadhyay at the veterinary university in Vrindavan, Adityanath said during his hour-long speech: "A cow-based economy is a one-stop solution to poverty in our villages.

"The universities must start researches on cow urine and dung and come out with new products. The government will provide every support for this."

Under the Gau-Gram Scheme, community cowsheds will be set up in villages. Adityanath has said in many of his recent speeches that he believes the rural economy can get a boost if the supply of milk products is increased and if medicines are made from cow urine and dung."The consumption of LPG should be minimised by encouraging the use of cow dung cake for fuel in rural areas. New, cow dung-based biogas plants should also come up in our villages," the chief minister said on Sunday.

According to Adityanath, cows of indigenous breeds would give 15 to 25 litres of milk every day if researchers developed them properly.

A senior BJP leader in Uttar Pradesh said on the condition of anonymity that both Adityanath and the cow had "good political appeal".

"While it is a challenge for the chief minister to retain 73 of the 80 Lok Sabha seats in the state, he is also expected to increase the party's tally in non-BJP-ruled states, particularly Bengal where we had won only three seats in 2014," the leader said.

"This can be the only reason for linking slaughterhouses in Bengal with Uttar Pradesh's cattle smugglers. While campaigning in Tripura on Monday and Tuesday, he is expected to attack the Mamata Banerjee-led Trinamul government in Bengal and the CPM," the BJP leader added.