Several former judges have said that the Chief Justice of India (CJI) is under no obligation to recuse himself from judicial matters because of the impeachment notice but have voiced concern at the stress Justice Dipak Misra is under and its possible impact on the discharge of his duties. 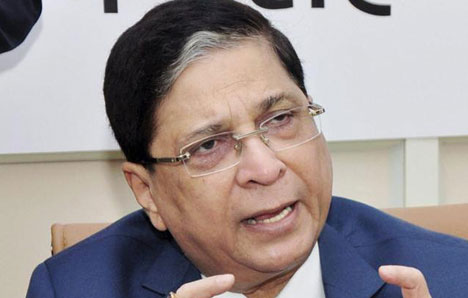 New Delhi: Several former judges have said that the Chief Justice of India (CJI) is under no obligation to recuse himself from judicial matters because of the impeachment notice but have voiced concern at the stress Justice Dipak Misra is under and its possible impact on the discharge of his duties.

Expressing deep anguish at the developments, Justice R.M. Lodha, a former CJI, said it was a "very, very, very, sad day for the judiciary" and wondered how the incumbent CJI would be able to function.

"It is very, very unfortunate. It has never happened. I find it really difficult to understand how the CJI will be able to function because his authority is diluted to a great extent and because of the constant stress he would be under," Justice Lodha told The Telegraph.

"This is unprecedented and unfortunate and a very sad day for the judiciary and, in particular, the Supreme Court that a legislative process for impeachment has been initiated. It has never happened. I am not aware of the ground on which the impeachment notice has been given. But it is really a very, very, very, sad day for the judiciary."#He added that much would depend on the action Venkaiah Naidu, the Chairperson of the Rajya Sabha, takes on the notice.

If the Rajya Sabha Chairperson refuses to take up the motion, the MPs have a right to petition the Supreme Court. "Yes, that is amenable to challenge; there is no doubt about it," Justice Lodha said.

Justice P.S. Radhakrishnan, a former Supreme Court judge, said he would not like to comment whether Justice Misra's continuation had become untenable: it was for the CJI to decide.

"That's exactly for him to say. But I don't think he will be able to discharge his duties because he has been undergoing this (stress) for the last so many months from within and outside," Justice Radhakrishnan said.

The former judge, however, said there was no legal obligation on the CJI to recuse himself.

"Absolutely not and it is doubtful whether it (the impeachment notice) would fall under the expressions of 'misconduct' or 'proven incapacity', which are the actual grounds for impeachment. Anyway, there are a lot of other procedures and I do not know what Parliament would do. Let us wait and see," Justice Radhakrishnan added.

Former Patna High Court judge Ajit Kumar Sinha said it would be premature to say whether the CJI should step down. "Asking him to step down for the present may be hampering many judicial proceedings pending before the court, and then there is nothing to suggest that he has to step down. It is his call."#Justice M.N. Rao, former Chief Justice of Himachal Pradesh High Court, felt that the present situation had arisen from a failure to project the judiciary as a cohesive unit.

"Why has such a situation arisen for the first time in the country? Why has the situation gone wrong? Lack of leadership, failure to take colleagues (along).... Attempts to project the image of the court as a single inviolable entity that cannot be broken are missing. So, as an institution, it (the judiciary) has suffered," Justice Rao said.

Justice Rao said that after the unprecedented media conference held by four senior judges in January, the CJI should have invited them and sorted matters.

He felt that Justice Misra need not resign or recuse himself now but would be under a moral obligation to do so if Naidu admitted the impeachment motion.

"If Naidu appoints a committee, he has to recuse. But merely because you give a complaint to the Vice-President or the Speaker, he need not resign," Justice Rao said.