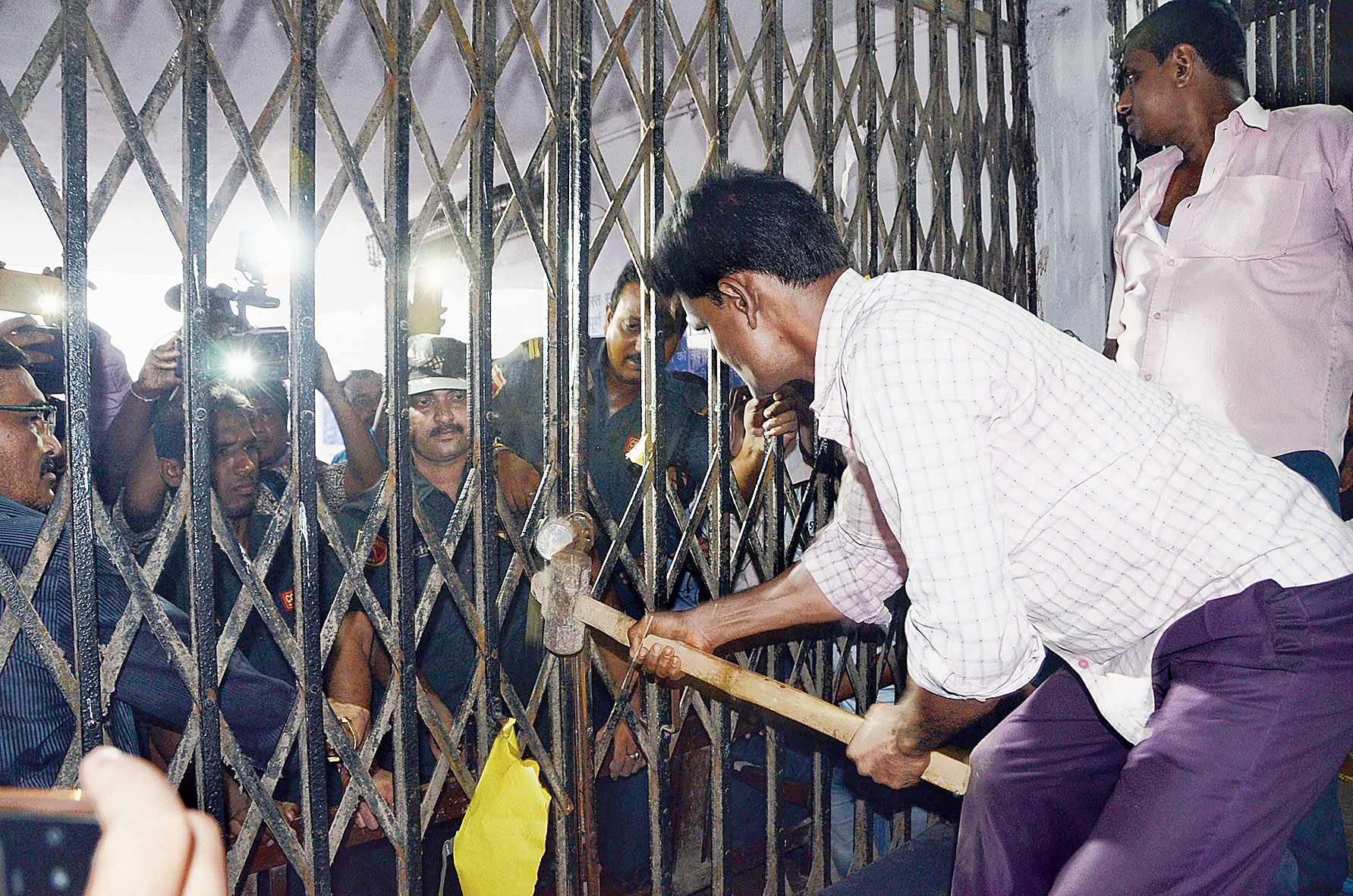 An employee smashes with a sledgehammer the lock on the emergency ward gate at Burdwan Medical College and Hospital on Wednesday.
Picture by Anirban Hazra
Debraj Mitra   |   Calcutta   |   Published 14.06.19, 01:08 AM

All sides appeared to be exploring ways to resume emergency services in state-run Bengal medical colleges as night fell on an explosive day on which chief minister Mamata Banerjee burst into SSKM Hospital and served a four-hour ultimatum on junior doctors to withdraw their strike or face eviction from hostels.

The unparalleled threat and the high-voltage confrontation were marked by the unfamiliar episode of apolitical slogans sometimes drowning the words of Mamata.

An immediate fallout was the evaporation of what looked like the stirrings of a truce at NRS Medical College and Hospital, the epicentre of protests after doctors there were assaulted on Monday night following the death of a patient.

Mamata’s outburst prompted several doctors in other hospitals in Bengal to either submit their resignation letters or threaten to resign in protest. The ripples spread beyond Bengal to AIIMS in New Delhi, and the Indian Medical Association announced an “all-India protest day” on Friday.

However, Mamata’s repeated assertions that she was forced to warn of action because of the plight of poor patients also had its impact. The Burdwan Medical College and Hospital’s emergency ward was opened after smashing the lock.

The emergency ward at SSKM, paralysed since Tuesday, was reopened by police shortly after Mamata spoke at the hospital. But the protesting interns stayed off the emergency ward and refused to end their cease-work till late on Thursday night.

The resumed emergency services at SSKM ran largely because senior doctors felt that there was no justification in denying the humanitarian service to patients who have been caught in the crossfire.

A senior SSKM doctor, who fully supports the cause of the junior doctor, told The Telegraph in a first-person account: “In my 38 years of service in government hospitals, I have taken part in and also witnessed many agitations but never have I seen services stopped in the emergency.”

As Calcutta went to bed, a mix of hope and anxiety hung in the air. A snapshot:

But the threat of action is being kept alive. The government is exploring the possibility of holding back by six months the registration of the junior doctors who did not resume work within the chief minister’s deadline, sources in the government said. If the step is enforced, the junior doctors will get their formal licence to treat patients six months later than expected.

The letters, which have not been accepted, offer an opportunity. If the students can be persuaded that the senior officials are taking the blame and expressing regret, it may offer a way out of the stand-off.

After Mamata’s threat and signs that the healthcare crisis could escalate further, some senior doctors did put in place a back-channel effort to defuse the crisis.

Across hospitals, senior doctors are expected to help resume emergency services by Friday, sources said. If services are restored and patients are pacified, the atmosphere will be more conducive to the restoration of normality.

At AIIMS New Delhi, some faculty members were trying to persuade the junior doctors to call off Friday’s protest, arguing this was not the solution.

But the senior doctors in Calcutta have cautioned that the government has to find a resolution by 24 hours. Beyond that, it could be difficult to run emergency services without the help of junior doctors, they said.

At SSKM, the hostels were almost empty by evening and the inmates spent the night at the academic council building that also houses the director’s office. “We were scared to spend the night at the hostel after the chief minister’s ultimatum. Our colleagues are being attacked across the state,” said one of the interns.

Arpit Saha and Onkar Hazra, both post-graduate trainees, made an official statement on behalf of the protesters. “The chief minister could have resolved the crisis quickly if she wanted. But she termed us outsiders and threatened us with police action,” Saha said.

Hazra said there was no question of calling off the cease-work until their demands were met. “The chief minister should apologise for her statement,” he said.

A senior nephrologist and professor at SSKM, who equated the agitators with her children, said: “The interns are like my right hand while treating patients. We will not be able to serve people without them.”