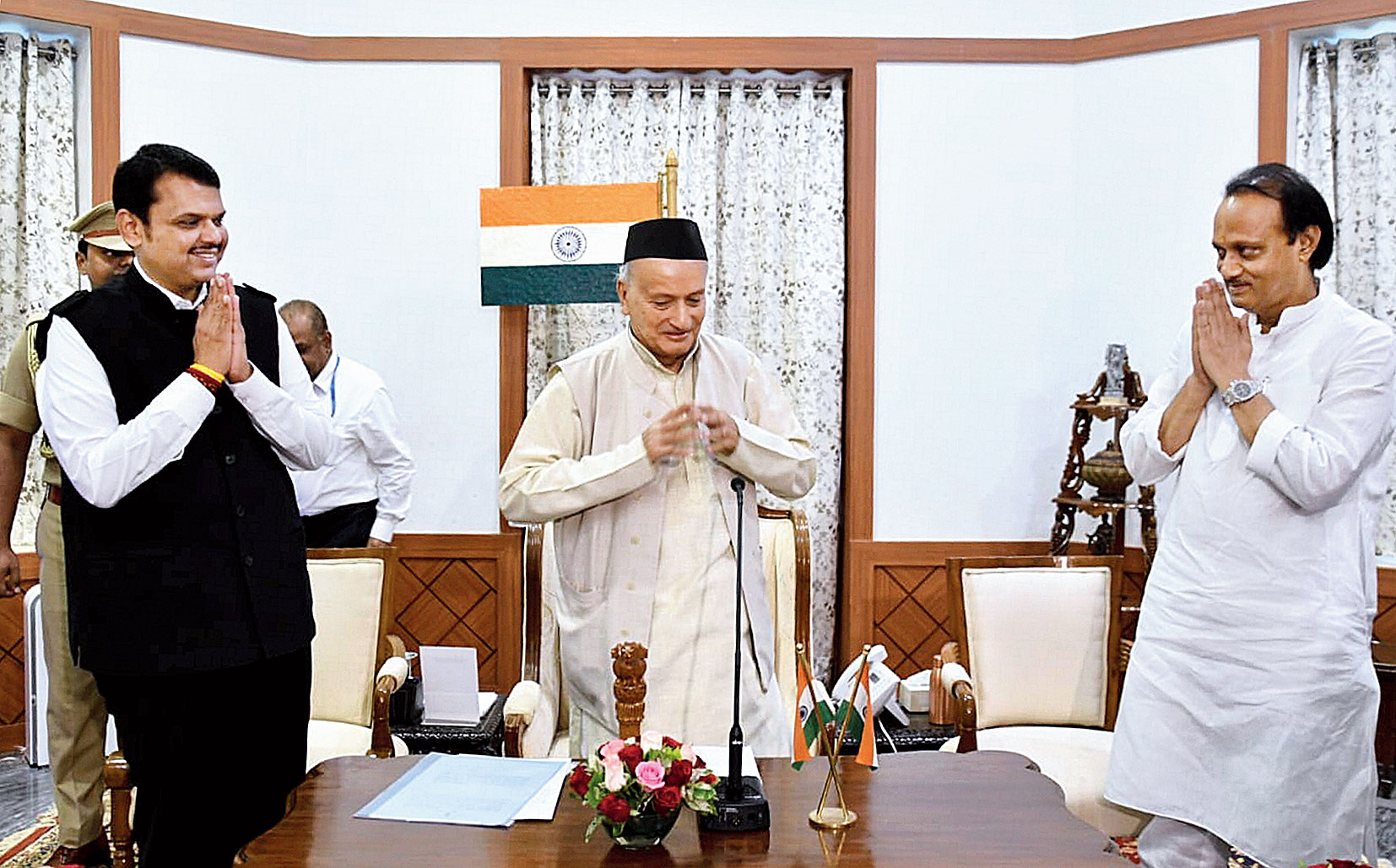 The BJP snatched the reins of Maharashtra from the Shiv Sena-NCP-Congress alliance’s grasp early on Saturday morning, helped by alleged subterfuge on the part of Sharad Pawar’s nephew and a series of secret manoeuvres since Friday night.

After a pre-dawn revocation of President’s rule that needed the Prime Minister to invoke special powers meant for emergencies, Devendra Fadnavis was sworn in as chief minister at 7.50am with Ajit Pawar offering the support of the NCP.

Ajit, whom Fadnavis had once termed the “epitome of corruption” while promising to “never, never, never” tie up with the NCP, took oath of office as deputy chief minister.

Prime Minister Narendra Modi, possibly the first to tweet his congratulations to Fadnavis and Ajit minutes after the swearing-in, had during the 2014 Assembly poll campaign labelled the NCP “Naturally Corrupt Party”.

A stunned Sena-NCP-Congress combine, whose leaders had gone to bed on Friday night expecting to stake claim to form the government on Saturday, approached the Supreme Court in the evening asking the swearing-in be quashed as unconstitutional.

The NCP has alleged deceit, saying the letter of support from its 54 MLAs that Ajit had purportedly handed the governor was meant for a Sena-led government and had been given to Ajit in his capacity as leader of the legislature party.

NCP patriarch Sharad Pawar fought back in the evening, summoning a meeting of party MLAs that reports said was attended by over 40 of the 54 members, dampening the BJP’s morning euphoria.

By late evening, worried BJP leaders were talking of a plan to split the Sena and the Congress to try and save the Fadnavis government.

The BJP has 105 members in a House of 288, where the majority mark is 145, and Fadnavis must prove his majority on the floor of the Assembly by November 30.

“Our target is to win over as many Independents as possible and try and split the Sena and the Congress. Ideologically, many Sena MLAs will be comfortable aligning with us; we expect them to cross the floor during the trust vote,” a BJP leader said.

The swearing-in began at 7.50am and was over by 8.10am. News agency ANI broke the news at 8am and Modi posted his congratulatory tweet at 8.16.

“Congratulations @Dev_Fadnavis Ji and @AjitPawarSpeaks Ji…. I am confident they will work diligently for the bright future of Maharashtra,” Modi tweeted, providing the first indication to many Indians about the turnaround in Mumbai. He was followed by BJP president and Union home minister Amit Shah.

The oath-taking capped a few hours of hectic but hush-hush acts of intrigue in Delhi and Mumbai.

First, Maharashtra governor Bhagat Singh Koshyari cancelled a scheduled trip to Delhi, where he was to attend a governors’ conference, at the eleventh hour. Most people thought he was staying back to allow Sena chief Uddhav Thackeray to stake claim to form the government.

“The governor actually cancelled the trip because he had been asked to do so — our plan to outwit the unholy trio (Sena-NCP-Congress) was ready,” a BJP insider crowed.

Reports said a little after midnight, Koshyari sent a proposal to Delhi to revoke President’s rule in Maharashtra. The home ministry’s gazette notification announcing the lifting of central rule came in pre-dawn darkness at 5.47am, which means President Ram Nath Kovind’s proclamation of the revocation was issued even before that. Since there had been no cabinet meeting to recommend the revocation to the President, the Prime Minister invoked the special powers vested in him to do so. The cabinet will approve the move post-facto.

BJP insiders said the party had found it easy to prey on Ajit, left vulnerable by a corruption case and a succession war within his party with Pawar’s daughter Supriya Sule. The Enforcement Directorate had recently named Ajit in the Rs 25,000-crore Maharashtra state cooperative bank scam.

Party sources said that after protracted talks through emissaries, Ajit bit the bait on Friday.

Sena leader Sanjay Raut on Saturday said Ajit had been “busy with his phone during Friday’s (NCP-Congress) meeting and was not looking anyone in the eye while talking”. Raut said Ajit had left the meeting midway, “making some excuse”.

BJP spokespersons on Saturday justified the deal with Ajit by referring to the NCP-Congress’s alliance with the ideologically incompatible Sena.

“When the Congress goes with the Sena, an ideological enemy, then it’s fine but when the NCP legislature party leader comes out to support Fadnavis to give a stable government, then it’s murder of democracy,” law minister Ravi Shankar Prasad scoffed.

Prasad justified the unannounced early morning swearing-in, saying the voters’ mandate was for the BJP-Sena alliance and while the BJP had emerged as the largest party, the Sena had backstabbed the mandate.