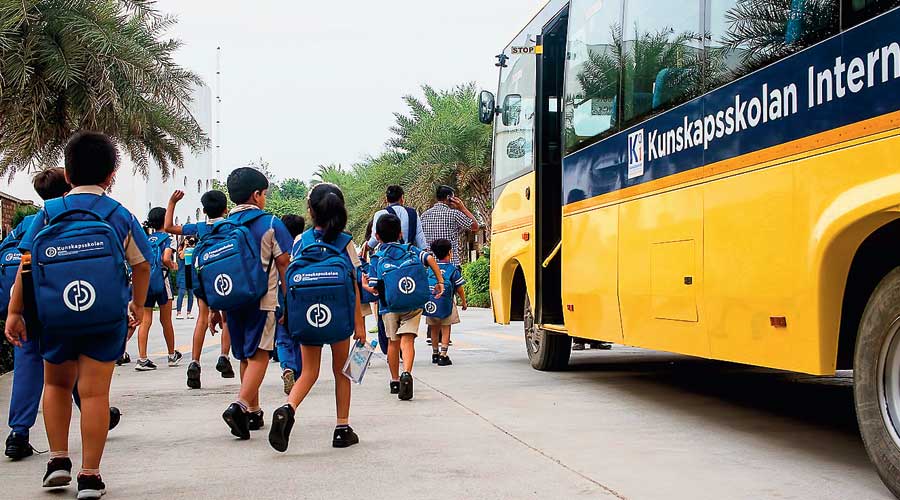 These questions from the Kunskapsskolan School and the Shiv Nadar School have prompted educationists to level charges of RTE violation, privacy breach and possible caste or class-based selection.

Both schools have defended the questions and denied they would be used to eliminate or select students.

Many Gurgaon schools recently released their admission forms for the session beginning next January. Kunskapsskolan’s form asks for the mother’s age during pregnancy, the mode of delivery, and the child’s Apgar (appearance, pulse, grimace, activity, respiration) score at birth.

The Shiv Nadar School has sought to know the occupation of the grandparents. Many schools across the country do ask about the parents’ professions but rarely does any

invoke the grandparents’ occupation — which can be a clearer indicator of caste because it relates to earlier times, less conducive to social mobility.

Officials of both schools said their admission forms had carried these questions for several years. They argued that the information gleaned helped meet the children’s special needs, if any, and provide them the benefits of any special knowledge that any grandparent possessed.

Controversy broke out after some people wrote about the forms on social media.

Anita Rampal, former dean of Delhi University’s faculty of education, said the questions on the children’s and their mothers’ medical histories violated the Right to Education Act and amounted also to a breach of privacy.

“A mother’s age during pregnancy or the mode of delivery is personal information. Asking for such information is a breach of privacy,” she said.

“To claim that this would let them (the school) decide if a child has special needs is specious and mala fide. More significantly, the RTE Act bans any kind of screening process for admission. This violates the law.”

Section 13 of the RTE Act says: “No school or person shall, while admitting a child, collect any capitation fee and subject the child or his or her parents or guardian to any screening procedure.”

Kunskapsskolan said it needed the medical histories to determine whether some of the children had “developmental vulnerability”, and to address it.

“Developmental vulnerability” refers to the risk of a child having a difficult start to school and of her educational challenges harming her long-term health.

“Kunskapsskolan has always been an inclusive school and continues to cater to students with neuro-diverse needs. We also believe in providing personalised education to each child and understand that the learning graph and ways for each student will be different,” the school told The Telegraph in an email statement.

“The questions regarding the birth history of the child, like age of the mother at the time of pregnancy, mode of delivery, and Apgar score are to understand if the child has a probability of developmental vulnerability. These details help the professionals at school to acknowledge the specific needs of the child to provide adequate and effective support.”

According to the school website, the Kunskapsskolan Educational Program (KED) was conceptualised in 1999 in Sweden. It focuses on personalised education and individualised goals based on each student’s needs and abilities.

“We at Kunskapsskolan are looking at students being successful academically, emotionally and socially, and this information helps us understand how best we can support the child. This information is not used for elimination and does not impact the admission process,” the school’s statement said.

“However, as a school, we need to be clear and confident that we are in a position to support the child in his/her journey at school.”

Asked whether Kunskapsskolan schools sought these information from parents in Sweden too, a school official said they didn’t have to because the Swedish government issues cards to children detailing their special needs, if any.

“No detailed data are provided to the parents at childbirth, so they cannot provide most of the information sought. Only when there’s a significant event like delayed crying, etc, it may be revealed to the parents,” he said.

Even if the parents have all the information sought, he said, these data cannot by themselves determine whether the child is developmentally vulnerable.

“Just data will not help determine whether the child has special needs, it’s observation of the child that may reveal this. Redundant data collection helps nobody; it only aggravates the confusion,” Dargar said.

The school’s email responses to this newspaper were silent on the contention that the information sought didn’t necessarily establish whether the child might be developmentally vulnerable, and the charge that seeking the information violated the RTE Act.

Venita Kaul, professor emerita for education at Ambedkar University, said a school may ask the parents generally whether their children have any special needs.

“But asking every parent to give such data is not right,” she said, arguing such practice suggested the possibility of profiling and biased selection.

The Shiv Nadar school said it often invited grandparents with special knowledge to interact with its students, hence the questions about their occupation.

“Shiv Nadar School has a robust and a transparent admission process that provides equal opportunities to students of all backgrounds. The school believes in involving the parents in the teaching-learning process of the child,” it said in a statement.

“In our admission form, we only ask for grandparents’ professional background and not their education qualification. This information is not an eligibility criterion but a way to develop learning partnership. For example, a judge or a lawyer can talk to our students about law, while a farmer can help our students learn about agriculture.”

But Kaul questioned the way the data were being collected.

“The grandparents can share their new or unique knowledge in any area. But instead of seeking this information on the admission form, the school should have asked for a statement whether any grandparent could help enrich the classroom practices,” she said.

Rampal too said the school could very well seek the information on grandparents’ “expertise” after the admission process was over. “When the school has put it (the question) on its admission form, it can clearly be used to select children for admission, which is a violation of the law,” she said.

The Kunskapsskolan global chain has formed a joint venture with Gyandarshan Eduventures Private Limited to set up schools in India. There are two such schools in Gurgaon, one in Lucknow and a fourth in Bangalore.