Westerly and northwesterly winds bring smoke, caused by stubble burning in Punjab and Haryana, to the national capital 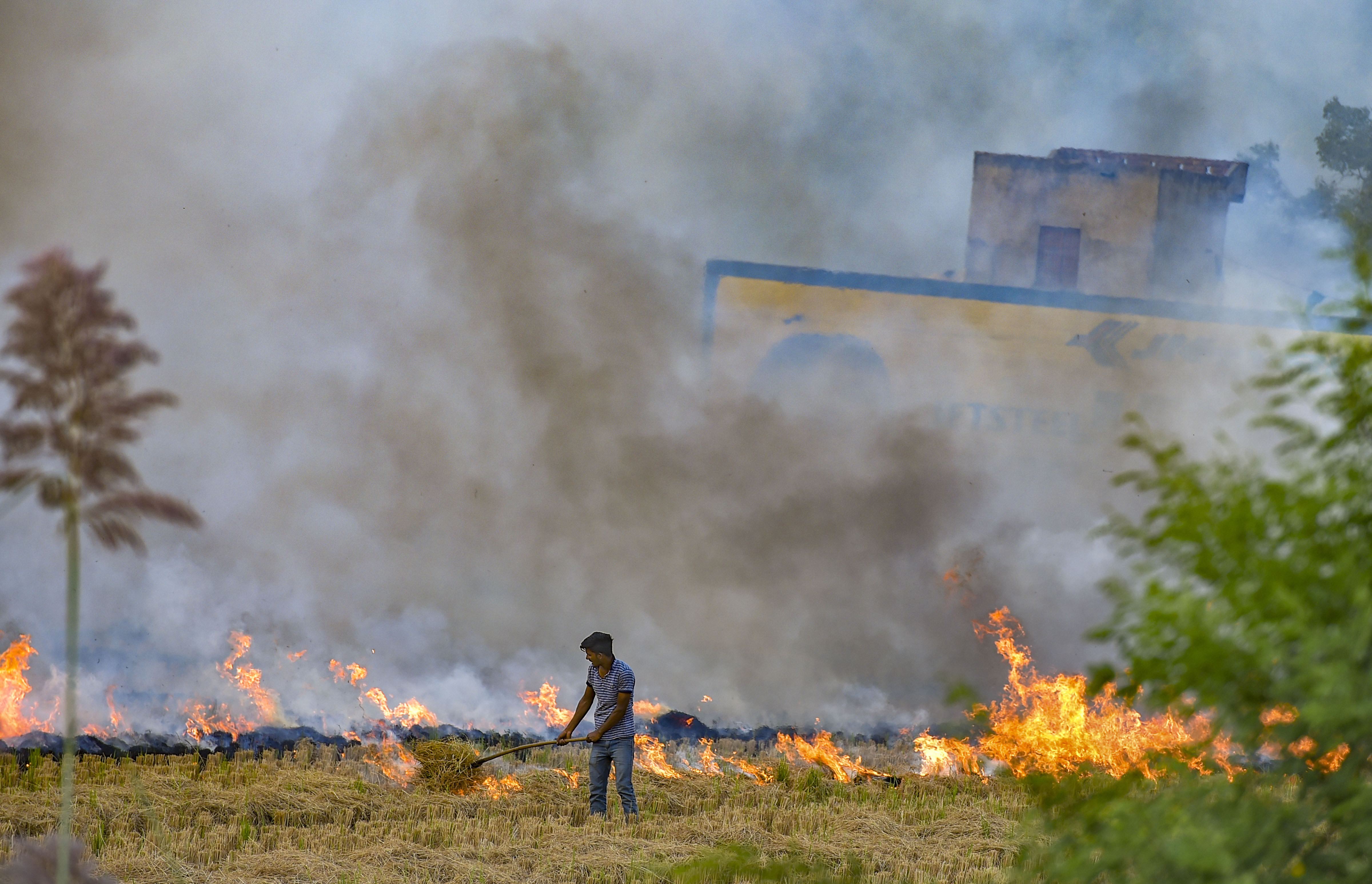 The national capital's air quality turned 'poor' on Sunday as wind direction changed to northwesterly, increasing the contribution of smoke from stubble burning in neighbouring states to the pollution in the city.

Westerly and northwesterly winds bring dust from western regions and smoke caused by burning of crop residue in neighbouring states of Punjab and Haryana to Delhi-NCR.

After fluctuating between 'poor' and 'very poor' for over a week, the city's air quality had improved to 'moderate' category on Saturday, mainly due to a squall in Delhi that dispersed pollutants and rainfall in the neighbouring areas, which subdued the effect of stubble burning.

However, on Sunday, pollution levels in Delhi shot up by around 100 points at air quality index (AQI), the Central Pollution Control Board data showed.

The AQI, which was 161 on Saturday, rose to 258 by Sunday afternoon. More the AQI of an area, the higher the pollution level.

The ministry of Earth sciences' air quality forecast and research service, SAFAR, said, 'The overall air quality of Delhi is back in the poor category. The surface and boundary layer wind direction is northwesterly now.'

'An increase in stubble burning in the northern part of India has been observed. The circulation pattern is supportive for efficient biomass plume transport to Delhi,' it said in a report.

The System of Air Quality and Weather Forecasting and Research (SAFAR) said the share of smoke from stubble burning in Delhi's PM2.5 concentration was 13 per cent on Sunday, the highest in over a week. It was zero on Saturday and is likely to increase to 19 per cent on Monday.

'A considerable increase in biomass share in pollution contribution is expected over the next two-three days. AQI is forecast to deteriorate to very poor category by Monday,' SAFAR said.

Kuldeep Srivastava, a senior scientist at the India Meteorological Department, said strong surface winds clocking 15-20 kilometers per hour blew across Delhi, which is favourable for dispersion of pollutants.

'But the direction will completely change to northwesterly from October 21 onwards,' he said.

According to CPCB data, more than 3,000 stubble burning incidents have occurred in Punjab and Haryana since the harvesting of paddy crop started around September 25. During the corresponding period last year, the count was around 2,600.

The period between October 15 and November 15 is considered critical as maximum number of stubble burning incidents take place in this span in Punjab and adjoining states and is one of the main reasons for the alarming spike in pollution in Delhi-NCR.

Despite a ban on stubble burning in Punjab and Haryana, farmers continue to defy it amid lack of financial incentives.

State governments are providing 50 to 80 per cent subsidy to farmers and cooperative societies to buy modern farm equipment for in-situ management of paddy straw and running a massive awareness campaign against stubble burning.

The Delhi government has on several occasions attributed the dip in the air quality to rampant stubble burning in neighbouring states.

'Air quality in Delhi has been good or moderate for the last 7-8 months, but they (pollution levels) have starkly gone up now... Clearly, the sudden spike in pollution is a result of smoke coming from outside,' chief minister Arvind Kejriwal had said earlier.

The Delhi government has also tied up with Washington University and set up a centre near India Gate to collect data, with the help of which it will be able to tell the degree of air pollution due to specific sources from April next year.