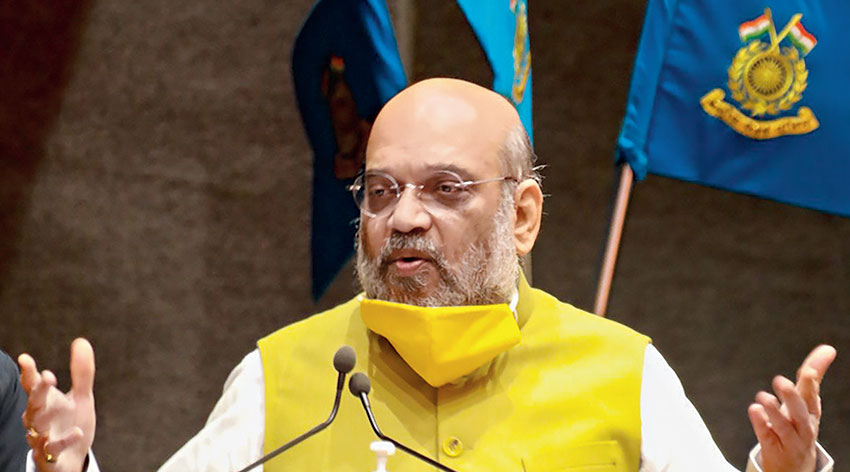 It has also alleged that “police were complicit and abetted the attacks” during the riots, which killed 53 people, and arrested victims rather than the people they accused.

One of the key charges in the panel’s report is that BJP leader Kapil Mishra, a former Delhi minister who lost the February 8 Assembly polls this year, triggered the riots through a speech in Maujpur on February 23.

The fact-finding committee, led by Supreme Court advocate-on-record M.R. Shamshad, submitted its report to the Delhi cabinet, the Speaker and lieutenant governor Anil Baijal on July 13.

In a paragraph headlined “Delhi Legislative Assembly elections 2020: Incendiary campaign speeches and the fanning of communal sentiments in Delhi”, the report highlights speeches made by Shah, Adityanath, Mishra as well as Union ministers Giriraj Singh and Anurag Thakur, MPs Parvesh Verma and Tejasvi Surya, and other BJP campaigners.

It says: “The violence which broke out in northeast Delhi was clearly preceded by a number of speeches by BJP leaders openly maligning anti-CAA protesters and questioning their motives with no basis, making derogatory remarks laden with communal undertones and open threats of violence, and to cast the Shaheen Bagh protests, particularly, in a negative light to build an ‘anti-Shaheen Bagh’ narrative.”

Among the speeches cited in the report is one by Shah on January 27, where he said: “Your vote to BJP candidate will make Delhi and the country safe and prevent thousands of incidents like Shaheen Bagh.”

Adityanath is quoted as saying on February 2: “(Chief minister Arvind) Kejriwal and his mandali (clique) are trying to fan unrest and anarchy by tacitly supporting the Shaheen Bagh protests. These protests are nothing but a way for some section of people to show their objections against the scrapping of Article 370 and the construction of Lord Ram’s grand temple in Ayodhya.”

The Election Commission had censured Thakur – who had during a speech led chants of “shoot the traitors” --- and Verma.

“Violence started in different pockets almost immediately after the short speech of Shri Kapil Mishra on 23 February 2020 at Maujpur in which he openly called for forcefully removing the protesters at Jaffrabad in northeast Delhi,” the panel report says.

“He clearly said that he and his supporters will take matters into their own hands, alluding to extralegal vigilante tactics, in saying: ‘But after that we will not listen to the police if roads are not cleared after three days....’”

The report says the authorities should have construed the open talk about not listening to the police and adopting extralegal tactics as incitement to violence.

“(The) deputy commissioner of police, North East district, Shri Ved Prakash Surya, was standing right next to Shri Kapil Mishra when he said: ‘After that we will not listen to the police’,” the report says.

“At this point, the police failed to apprehend and arrest Kapil Mishra and all those gathered to hear and cheer his speech. This indicates that they failed to take the first and most immediate preventive step needed to avoid violence from arising and (to) protect life and property.”

On February 27, Delhi High Court had played the speech in court for the police and encouraged the force to take action. On Monday, the police told the court that “no actionable evidence has surfaced yet indicating any role being played by” any prominent political leader in “instigating and/or participating in the riots”.

Mishra told this newspaper that he would respond in a couple of days. The national head of the BJP’s media department, Anil Baluni, did not respond to queries emailed by this newspaper.

“Police were also complicit and abetted the attacks. Where police did act, victims state that (other members of the) police stopped their colleagues when they attempted to disperse the crowd (‘do not stop them’),” the report says.

“In one incident, five Muslim boys were surrounded by 6-7 police officers and brutally beaten up while being asked to chant ‘Jana gana mana’. One of them died some days later. The FIR registered does not name any accused.”

It adds: “The Delhi police failed to exercise its prohibitory powers, under the Delhi Police Act, 1978, which enables the commissioner of police to promulgate orders prohibiting the carrying of weapons and arms, and the assembly of persons as ‘necessary for the preservation of public order’.... In spite of the serious nature of complaints, the police did not act upon FIRs filed.”

The report alleges that the police arrested the victims, especially those who named the accused in testimonies, and says: “Crucial aspects of the entire chain of events (is) missing from most of the chargesheets that have been filed till date and which could be accessed by the fact-finding committee.”

“We are yet to receive the report and can only respond after reading it,” Delhi police’s additional PRO, Anil Mittal, told The Telegraph.

“There was no laxity in registering cases or in investigations into the riots. The police encouraged people to lodge complaints and ran a helpline for those affected by the riots, and responded to them in a robust and effective manner. Even today, anyone with a complaint can inform us.”

Mittal said that 752 cases had been registered and probed by three special investigation teams, 372 had been solved and 200 chargesheets filed. He added that 1,470 people had been arrested.

The panel found that the “violence followed an organised and systematic pattern” and was “selectively targeted towards the Muslim population”.

Asked why it had recorded only Muslim victims’ testimonies when at least 13 Hindus too were killed, Shamshad told this newspaper that this was done to avoid repetition of what was already in the chargesheets.

“We took the statements of those who had responded to our advertisements, and went to the homes of victims that we were informed of. Our mobility was restricted because of the pandemic,” he said.

“The cases given priority by the police and the chargesheets they filed -- like those against Shahrukh Pathan, (and the accused) in the murder of IB staffer Ankit Sharma -- extensively mention the testimonies of the victims that we were unable to record. We focused on telling the other side of the story.”

Pathan, a young man, was arrested after he allegedly pointed a gun at an unarmed policeman during the violence and fired. He did not hit anyone.

A councillor of the ruling Aam Aadmi Party, Tahir Hussain, was arrested in connection with the killing of Intelligence Bureau official Ankit Sharma during the riots.

The panel report has alleged that the compensation to the riot victims was “delayed and disproportionate to claims” and that many were yet to receive it more than four months after the violence.

Asked about this, a CMO official said: “We will study this report and if there are any corrective measures that need to be taken, we will absolutely do that.”