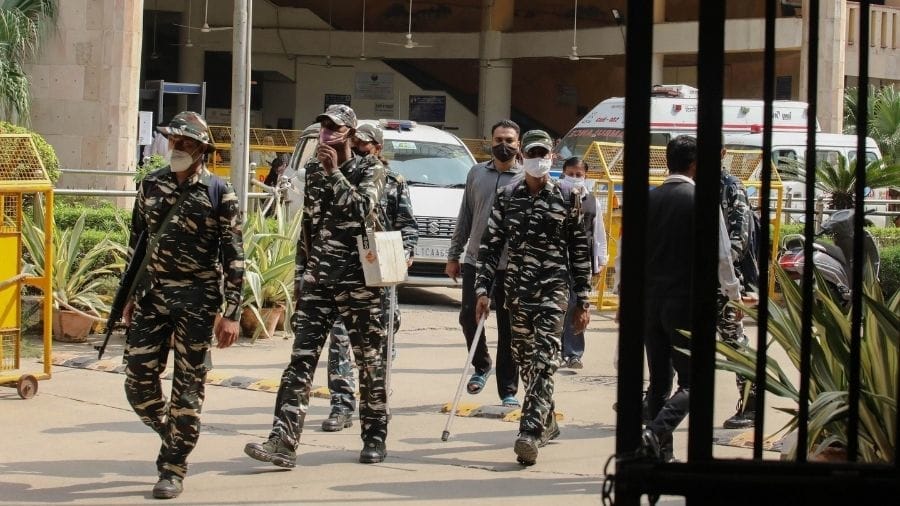 Lawyers' bodies in Delhi have demanded a probe into Friday's Rohini courtroom shootout, which killed three people including a gangster, and called for abstaining from work tomorrow to revise security norms inside all the seven district courts premises in the national capital.

The 'Coordination Committee of all District Courts Bar Associations in Delhi' called for suspension of work on Saturday and said it will decide the further course of action in a meeting that has been called for Monday.

In a meeting held virtually after the incident on Friday afternoon, the committee also proposed that a common policy related to the security was needed in all the district courts.

Jailed gangster Jitendra Gogi was shot dead inside a packed Rohini courtroom here by two assailants dressed as lawyers who were also killed in a police counter-fire, officials said.

Delhi Bar Association President Sanjeev Nasiar termed the incident as unfortunate and said the police was negligent in its duty.

A senior level investigation is required to look into the incident. This raises a question mark on the security. How could someone, lawyer or litigant, take a gun not just inside the premises but inside a courtroom, he questioned.

He said in view of the call given by co-ordination committee, the working in all the district courts will be suspended due to revision of security norms on account of the today's incident in Rohini Court, Delhi.

Chairman of Bar Council of Delhi, Rakesh Sehrawat sought action against those responsible for security at the Rohini district courts premises and said nothing can be more shameful than what happened today.

The bar body has urged the police to take action against those responsible for the security in the court premises there. We are meeting the commissioner or police tomorrow and will raise our concerns. Nobody, including the judges and the lawyers, is safe, he said.

If the steps are not taken to safeguard those inside the court premises, the committee will extend the strike further, he said.

He said such incidents have been repeatedly happening not just in the Rohini but also in Karkardooma courts premises and that the court security was at stake.

Despite raising this issue to Delhi Police Commissioner in multiple occasions in the recent past, no concrete step has been taken. It is due to the security personnel's carelessness that such incidents have been recurring, he said.

He also urged the lawyers to cooperate with the security checking.

He also said there was requirement of a separate gate for entry and exits for the lawyers.

Rohini District Courts Bar Association Secretary Manjit Mathur said that in a meeting held with the judges and the representatives of Delhi Police in Rohini courts after the incident, the body raised the demand of devising a 'common police' related to the security.

There should be a common police. Only improving the security after such an incident takes place will not do any good. We have assured to assist the police and want them to do their part, he said.

He added that the bar body has demanded a 'high level enquiry' in the matter.