The Congress says Kumar's conviction should not be politicised 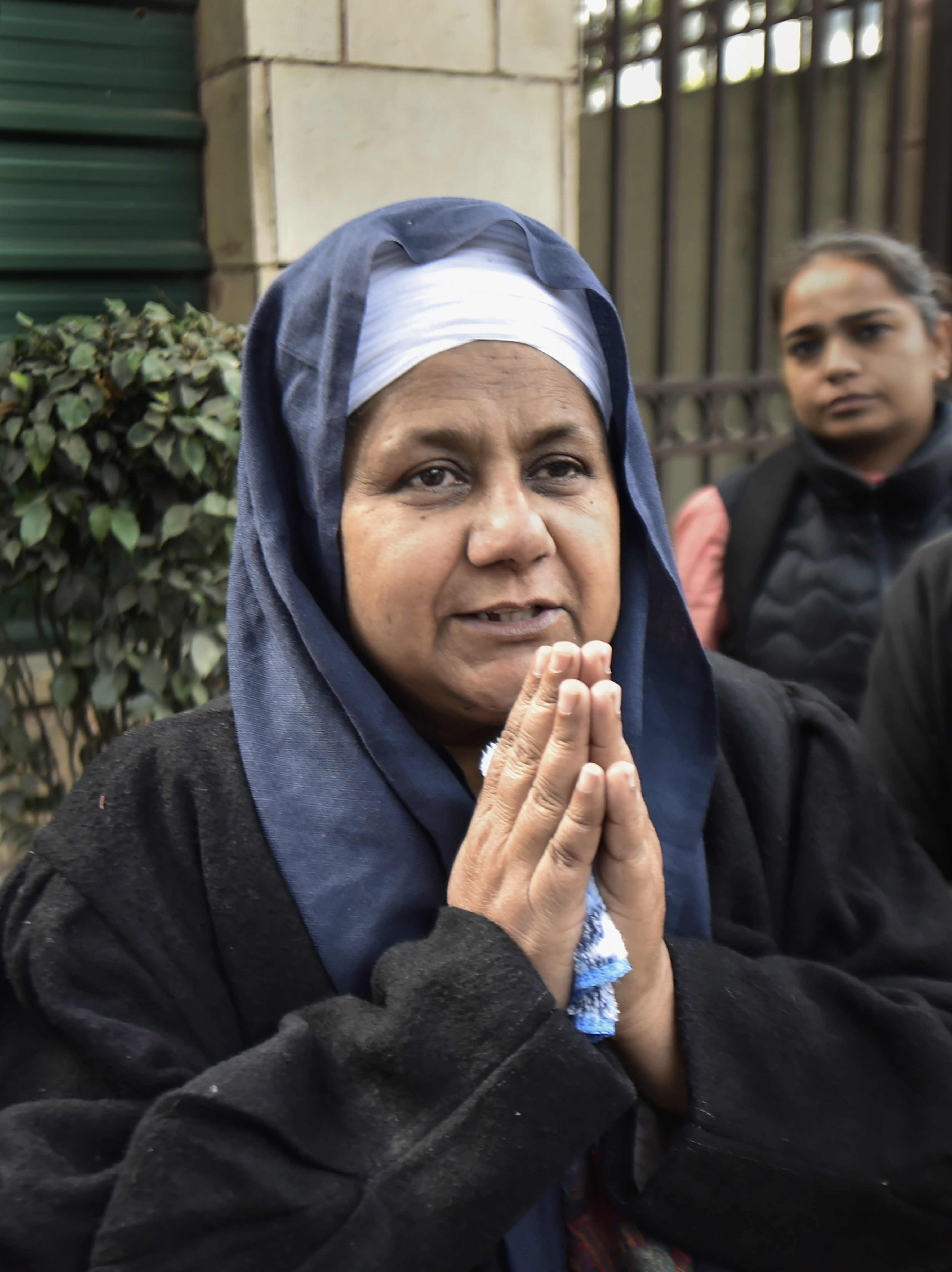 Nirpreet Kaur, whose father was killed during the 1984 anti-Sikh riots, reacts after the Delhi High Court convicted Congress leader Sajjan Kumar and sentenced him to life imprisonment on December 17.
PTI
PTI   |   New Delhi   |   Published 17.12.18, 06:43 AM

The high court was hearing the appeals filed by the CBI and the riot victims who challenged a trial court's judgment in the case in which Kumar was acquitted.

The high court had on March 29 last year issued showcause notices to 11 accused, including Khokhar and Yadav, in five 1984 anti-Sikh riots cases which were earlier closed.

The riots broke out after the assassination of Prime Minister Indira Gandhi by her Sikh bodyguards on October 31, 1984.

'It (the conviction) should not be linked to the political atmosphere prevailing in the country,' senior Congress leader Abhishek Manu Singhvi said.

Another Congress leader, Kapil Sibal, attempted to distance the party from Kumar by saying that he does not hold a position of power in the organisation.

'What decision has been taken by the court is a legal process. We have seen how a cover-up is going on in the Sohrabuddin case... and what about Justice Loya's death?' he asked, referring to the Sohrabuddin Sheikh encounter case and the suspicious death of Justice B.H. Loya, who was hearing the case.

'Don't give it a political colour as it is a court decision,' Sibal told reporters but also brought up the issue of the 2002 riots in Gujarat and alleged that a number of BJP leaders were named in the cases. 'Charity should begin at home,' he said.

Sunil Kumar Jakhar, the president of the Punjab Pradesh Congress Committee, said the party has been clear that whoever was involved in the riots should be brought to justice. 'Yes, justice has been delayed but delivered finally. Nobody is above the law and anyone who is involved in such a heinous crime should be brought to justice,' the Congress MP said outside Parliament.

The Delhi High Court on Monday convicted Congress leader Sajjan Kumar for conspiracy to commit murder in the 1984 anti-Sikh riots case and sentenced him to imprisonment for life.

The bench of Justices S. Muralidhar and Vinod Goel convicted Kumar of criminal conspiracy and of promoting enmity and acts against communal harmony. The high court said Kumar's imprisonment will be for the remainder of his life and asked him to surrender by December 31. It also told him not to leave Delhi before that.

The conviction came on the day Kamal Nath was sworn in as the chief minister of Madhya Pradesh. Congress leader Nath’s role in the riots has not been proved but he was accused of being involved in anti-Sikh violence in Delhi. The Congress, several of whose leaders either participated or fanned the riots, said Kumar's conviction should not be politicised and the law should take its own course.

Leaders of the Aam Aadmi Party and the BJP welcomed the conviction.

Delhi chief minister Arvind Kejriwal welcomed the verdict on Twitter. 'It has been a very long and painful wait for innocent victims who were murdered by those in power. Nobody involved in any riot should be allowed to escape no matter how powerful the individual maybe,' he wrote.

'It took 34 long years for justice because the Congress was in power. The case was closed but it was opened again by the Nanavati Commission. This case was kept closed by the Congress for so long,' Sirsa said.

BJP spokesperson Tejinder Pal Singh Bagga, who is on a hunger strike to protest Kamal Nath being named the chief minister of Madhya Pradesh, said he will appeal in the apex court for death sentence to Kumar.

Sajjan Kumar's imprisonment will be for the remainder of his life and he has been asked him to surrender by December 31.
File photo
Indian National Congress (Congress) Delhi High Court 1984 Anti-Sikh Riots Sajjan Kumar
Share
Advertisement
Advertisement