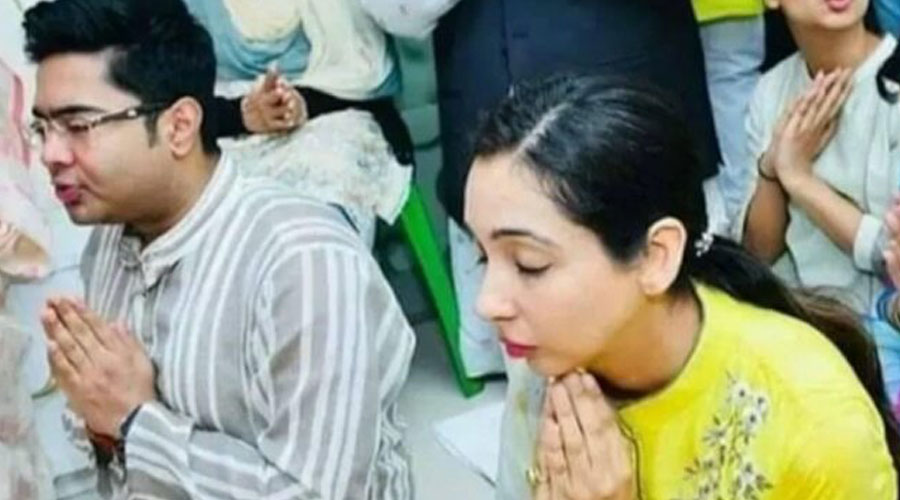 A Delhi court on Saturday issued a bailable warrant against TMC MP Abhishek Banerjee's wife Rujira Banerjee in connection with a complaint filed by the Enforcement Directorate for allegedly refusing to join the probe in a money laundering case linked to an alleged coal scam in West Bengal.

Chief Metropolitan Magistrate Snigdha Sarvaria passed the order on the ED's plea after the agency's special public prosecutor Nitesh Rana told the court that the accused was not appearing before either the court or the probe agency despite several summons issued against her.

The court posted the matter for August 20.

The ED lodged a case under provisions of the Prevention of Money Laundering Act on the basis of a November 2020 FIR registered by the CBI that alleged a multi-crore coal pilferage scam related to the Eastern Coalfields Ltd mines in the state's Kunustoria and Kajora areas in and around Asansol.

Local coal operative Anup Majhi, alias Lala, is alleged to be the prime suspect in the case.

Earlier, the ED had questioned Abhishek on Monday, March 19, according to a report published in The Telegraph on March 22.

A source said Abhishek’s statement was recorded under the Prevention of Money Laundering Act (PMLA) and he was confronted with some “evidences” gathered by the ED in the case.

“He was questioned about his links to the other accused in the case,” said an ED official.

The ED had first questioned the Diamond Harbour MP in connection with the case in September last year.

The ED, he said, was not satisfied with his answers during the questioning in September last year and that was why he was summoned to appear before the agency again.

The ED had filed a criminal case under the provisions of the PMLA after studying a November 2020 FIR of the CBI that alleged a multi-crore coal pilferage scam related to Eastern Coalfields Ltd mines in the state’s Kunustoria and Kajora areas in and around Asansol.

Abhishek had told reporters that he would not bow down and surrender before the Narendra Modi-led BJP government and continue his fight against the saffron camp till the end.

In Calcutta, the issue of questioning of Abhishek and his wife had triggered a war of words between Trinamul and the BJP. Trinamul spokesperson Kunal Ghosh said the BJP was using agencies like the ED to malign Abhishek.

He also asked why Opposition leader Suvendu Adhikari, who had joined the BJP before the Assembly polls, had not been questioned though his name had cropped up in the Narada case.

Dilip Ghosh, MP and former state president of the BJP, had also claimed that the "arrest of Abhishek" was just a matter of time. “He will have to go to jail.… His name is linked with cattle smuggling, coal smuggling, illegal sand mining and what not,” Ghosh had alleged.