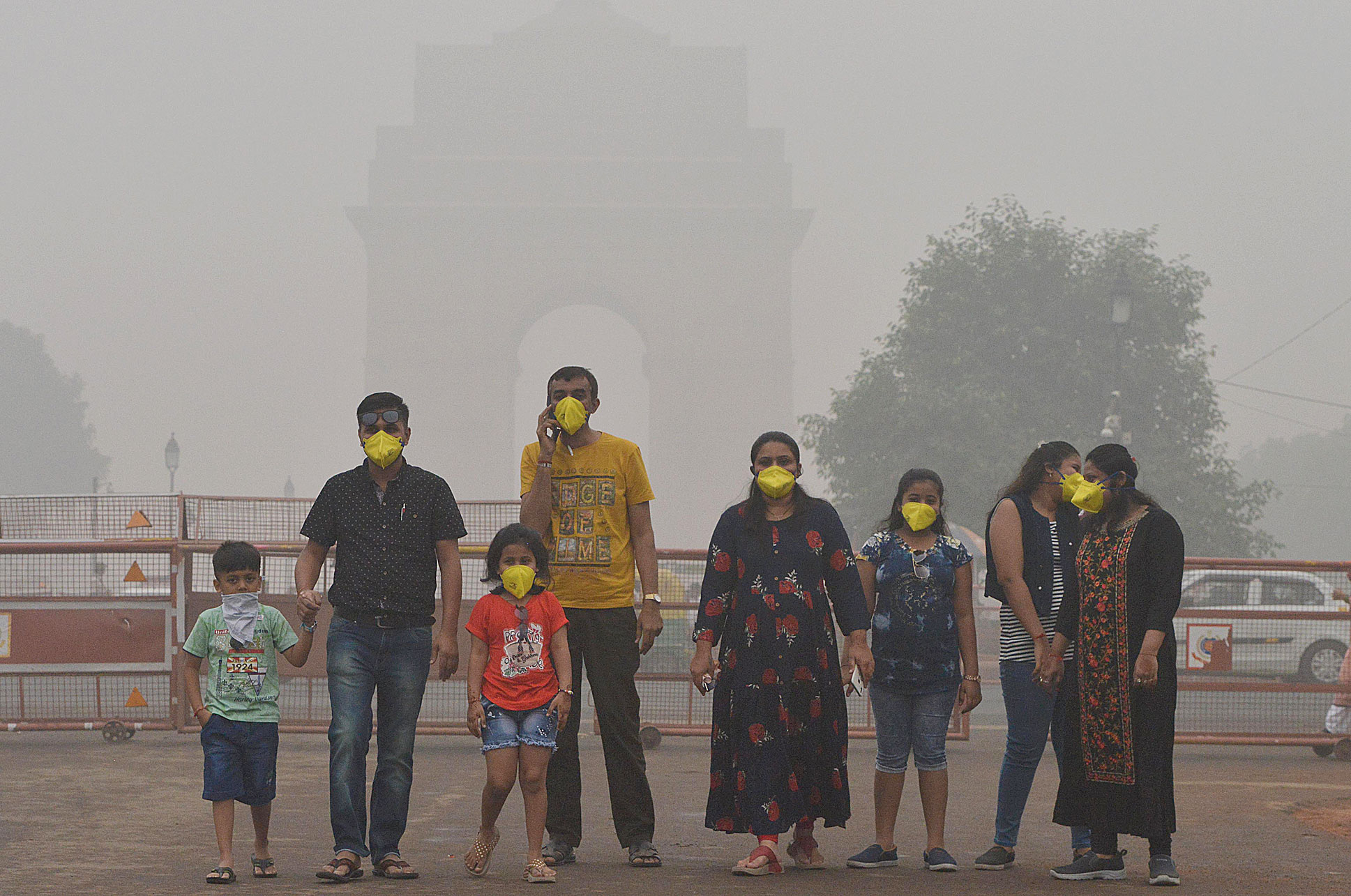 Weather conditions triggered an unprecedented spike in air pollution across the National Capital Region on Sunday, with the levels of toxic particulate matter jumping to more than eight times the safe limits — higher than even Diwali night peaks — at some sites.

The rise in air pollution caused multiple flights to be diverted from Delhi and prompted a stay-home call from an energy and environment research think tank.

Environmental experts said the deteriorating air quality over the past two weeks also underscored lingering concerns that the Centre’s investments on machinery had failed to adequately curb burning of crop stubble, a major source of the pollution.

Scientists attributed the fresh rise in pollution over the past day to the weather but asserted that soot from burning of crop stubble in Haryana and Punjab had contributed significantly to the NCR’s deteriorating air quality over the past 10 days.

It also quoted an Air India official saying the airline had diverted 12 flights to Amritsar, Jaipur and Lucknow.

A light drizzle and weak wind conditions on Saturday night caused tiny particulate matter (PM) accumulated in the air to break up into even smaller particles, building up PM levels, scientists monitoring air quality over the NCR said.

Concentrations of PM sized 2.5 microns rose to over 700 micrograms per cubic metre while PM sized 10 microns crossed 800 at some sites. The prescribed safe limits are 60 for PM2.5 and 100 for PM10.

“The NCR on Sunday experienced primarily a consequence of weather changes that we call secondary particle formation,” said a scientist with the System of Air Quality and Weather Forecasting Research (SAFAR), an agency of the ministry of earth sciences.

A copious amount of rainfall helps improve air quality by flushing out the pollutants, but a drizzle in an atmosphere already heavy-laden with pollutants has the opposite effect, particularly in the absence of wind.

Particle pollutants accumulate on water vapour and disperse into smaller particles through a process some scientists call self-generation, leading to a rapid build-up of PM2.5 concentrations. “This is what happened over the NCR last night,” a SAFAR scientist said.

At some sites, the PM levels rose to about 100 points higher than what they were on Diwali night, the scientist said.

The SAFAR has predicted that air quality will remain severe on Monday and improve to “very poor” category on Tuesday.

Authorities in Delhi and Noida have ordered schools shut until November 5.

The Energy and Resources Institute (Teri), a New Delhi-based research organisation, called on organisations to allow employees to work from home and asked parents to keep children at home to prevent exposure to the toxic air.

“Public and private organisations should allow people to work from home,” Ajay Mathur, the Teri director-general, said in a statement on Sunday.

About 1,000 employees of Teri have been asked to work from home on Monday.

Source-analysis studies by the SAFAR and Teri have underscored the large contributions of soot from crop stubble burning to the air pollution. The stubble share to the PM2.5 touched a season’s high of 44 per cent on October 31, the SAFAR had said on Saturday.

Data released by Teri on Sunday has also suggested that the rise in PM2.5 levels over the past 15 days may be “directly attributed” to the growing number of crop stubble fires in Haryana and Punjab.

The Teri analysis has also indicated that during the stubble burning period, soot from crop stubble fires contributes to about 40 per cent of pollutants over Delhi. But through the entire winters, stubble fires make up only four per cent with industries accounting for 30 per cent of air pollutants, followed by vehicles (28 per cent).

The Prime Minister’s Office held a “high-level meeting” with officials from the Union environment and agriculture ministries and officials from Delhi, Haryana and Punjab governments, among others, to review steps to tackle air pollution.

The Centre has asked the neighbouring states to reduce fire incidents and dust levels, the Press Information Bureau said. The meeting reviewed the situation arising out of stubble burning, construction activities, burning of wastes, and industrial and vehicular pollution, it said.

About 300 teams have been deployed across the national capital to ensure directives — such as a ban on construction activities and garbage burning — to curb air pollution are followed.