Advertisement
Home / India / Deep inside cells, a clue to the mind

Deep inside cells, a clue to the mind 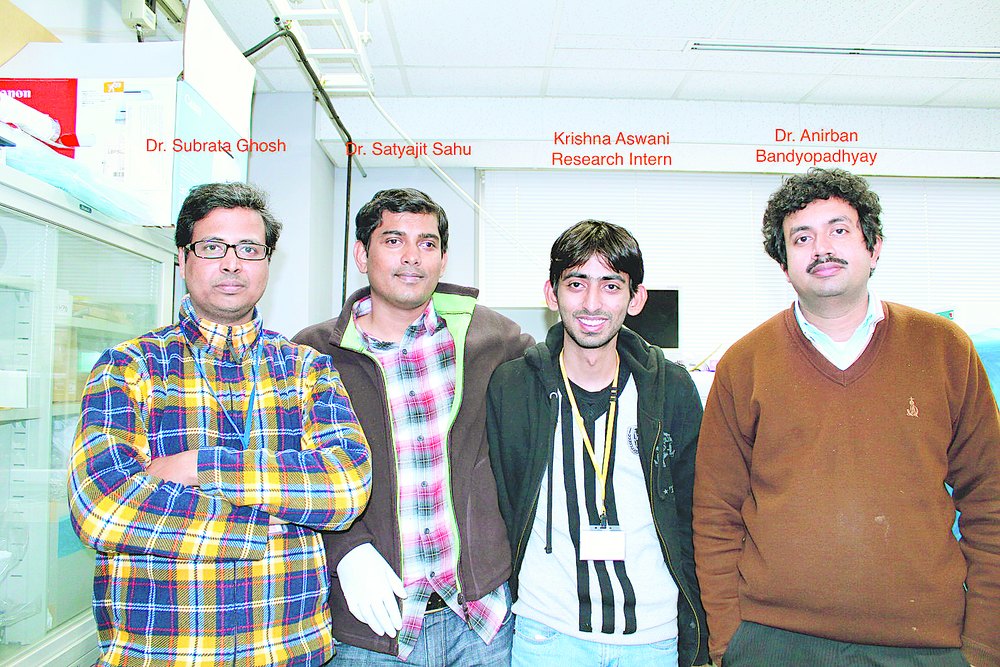 New Delhi, April 2: Indian physicists have discovered what they say are possible signatures of a hidden information-processing network in all living cells, predicted by other scientists two decades ago as a key to deciphering biological mysteries including consciousness.

The physicists in research laboratories in India, Japan and the US have found that fine thread-like structures called microtubules that make up the skeletal material of living cells are capable of storing information and exchanging it wirelessly via electromagnetic waves.

Biologists have long studied microtubules’ role in routine housekeeping of cells, such as in growth, division and movement.

But some scientists, fascinated by the architecture and ubiquity of microtubules, have proposed these biological structures may also process information and help explain life’s myriad activities — everything from how a single-cell organism with no discernible nervous system seeks food to how humans can think about their own minds.

“The microtubule appears to be a fundamental information-processing device in biology,” said Anirban Bandyopadhyay, a physicist at the National Institute of Materials Sciences in Japan who has led what some consider pioneering studies on microtubules over the past five years.

Bandyopadhyay and his colleagues have, in a research paper published in the journal Scientific Reports, shown how electromagnetic waves interact with basic units of microtubules called tubulins. The paper extends their earlier work on memory storage and wireless communications by these structures.

Their results have stirred ripples of excitement among sections of scientists in Europe and America.

Some of these scientists believe that these results may provide the first experimental support for a controversial hypothesis on consciousness proposed 20 years ago by British physicist Roger Penrose and American doctor Stuart Hameroff.

“This is the first direct evidence for the idea that information-processing in microtubules is necessary for consciousness,” Hameroff, an anaesthesiologist and director of the Centre for Consciousness Studies at the University of Arizona, Tucson, told The Telegraph.

Hameroff, who had predicted information-processing by microtubules in 1982, had collaborated with Oxford University physicist Penrose in 1995 to propose that microtubule computations in brain cells may be the basis for consciousness, one of biology’s enduring mysteries.

“The information-processing capacity of microtubules is dramatically superior to anything we have in everyday electronics,” said Satyajit Sahu, a collaborating physicist at the Indian Institute of Technology, Jodhpur.

While electronic devices work with two information un-its — zero or one — a microtubule can store about 500 units.
“Couple that with millions of microtubules in a single cell and we may be looking at a very powerful information-pr-ocessing system,” Sahu said.

Their results suggest that microtubules — maybe even brain cells or all neurons as a whole — may be able to exchange information wirelessly through a phenomenon called resonance without the need for synapses, the tiny junctions that relay chemical or electrical signals between neurons.

The researchers speculate that if microtubules can exchange information via electromagnetic waves generated internally by their molecular structures, the information-processing capacity of brain cells would be vastly more complex and superior than has been presumed until now.

But other scientists, while accepting the novelty of the observations which primarily relate to the physics of microtubules, caution that any link to consciousness or to the biology of brain cells, or even to other biological mechanisms, remains tenuous.

“The measurements they’ve done are sophisticated and difficult,” said Gautam Menon, a physicist at the Institute of Mathematical Sciences, Chennai, whose own research spans biology and physics.

“But to go from these measurements to understanding how such properties will work within cells to process information or generate consciousness seems far away.”

But scientists working on theoretical studies of microtubule behaviour view the physicists’ results as preliminary validation of some of their ideas.

“This work suggests that the microtubule is the computing and signalling hardware in cells,” said Michal Cifra, a physicist at the Institute of Photonics and Electronics in Prague, the Czech Republic.

“The finding that such omnipresent biological structures are capable of storing information is amazing.”

Jack Tuszynski, a physicist at the University of Alberta, Canada, who collaborated with Hameroff three years ago to propose that memories may be encoded in microtubules, said the studies by Bandyopadhyay and his colleagues have shown that microtubules have features “never seen in any material known to us”.

But both enthusiasts and sceptics agree that the findings need to be validated through more experiments.

“I think it’s a bit early to predict what this will lead to,” said Vidita Vaidya, a scientist at the Tata Institute of Fundamental Research, Mumbai.

“Sometimes it takes time for the relevance of new results to be recognised, and sometimes the implications of results may not be as expansive as initially thought.”

Hameroff said that independent indirect evidence for a connection between microtubules and consciousness had emerged from the laboratory of anaesthesiologist Roderick Eckenhoff at the University of Pennsylvania in the US.

In studies on tadpoles ---- an ideal creature to study the brain because they have transparent heads --- Eckenhoff and his colleagues have shown that anaesthetics that selectively erase consciousness act through microtubules.

But information-processing by microtubules, Hameroff said, is likely to be viewed by some scientists as a “threat” because this idea challenges key assumptions of neuroscience and artificial intelligence.

Present-day ideas treat a neuron as the equivalent of an electronic switch that receives information from synaptic junctions, processes the information and fires --- sends signals --- to other neurons.

“But treating a neuron as one information bit is an insult to the neuron,” Hameroff said.

“Consider a single-cell paramecium which swims, finds food and mates, and has sex with synaptic connections, using its microtubules. I tell my artificial intelligence colleagues, ‘Simulate a paramecium before worrying about (simulating) the brain’.”

Bandyopadhyay and his colleagues had first described the memory-storage potential of microtubules in the journal Applied Physics Letters and their capacity for wireless information transfer in the journal Biosensors and Bioelectronics two years ago.

The studies on microtubules were carried out at the National Institute for Materials Science, Japan. The other team members were Subrata Ghosh, now a post-doctoral scientist at the Harvard Medical School, Krishna Aswani, a PhD student at the University of Virginia, and Daisuke Fujita, the director of the advanced technologies division at the Institute.