A defence spokesman said Pakistan had indulged in an unprovoked ceasefire violation at 2.30pm 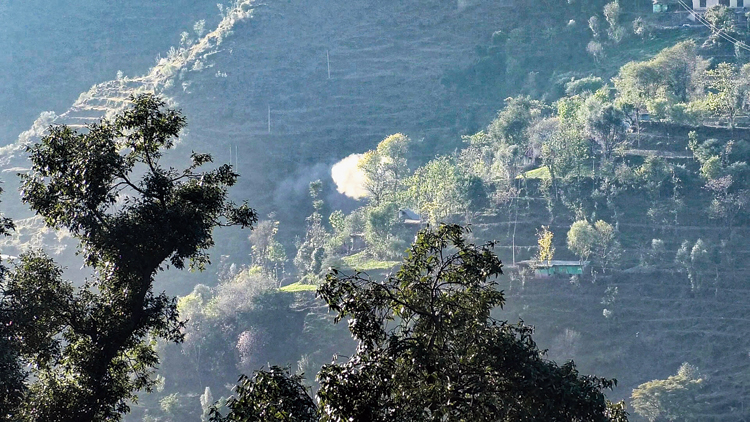 Two civilians we killed and seven others were injured in Pakistani shelling in Jammu’s Poonch district on Tuesday, triggering fresh tensions on the border.

“Intermittent shelling is continuing but the intensity is less now (in the evening compared to the afternoon),” Yadav added. “Three of the injured persons were shifted to Jammu.”

A defence spokesman said Pakistan had indulged in an unprovoked ceasefire violation at 2.30pm by firing from small arms and shelling mortars in the Shahpur and Kirni sectors of Poonch. “The Indian Army is retaliating befittingly,” the spokesman said.

Officials said some houses had been damaged in the Pakistani shelling, which had triggered panic among the people.

Tuesday’s deaths took the number of casualties in Pakistani shelling this year to 32.

Ceasefire violations have surged on the border after the scrapping of Jammu and Kashmir’s special status on August 5. The Centre recently put the number of violations at 950 in three months between August and October.

Officials said there had been 2,317 ceasefire violations on the border from January to October 10, against 1,629 in the whole of last year.

The fresh violations came on a day the police in the Valley claimed to have arrested nine miscreants who were allegedly involved in enforcing a shutdown.

A police spokesman said the nine persons were arrested in Srinagar and Baramulla districts for allegedly indulging in violence and threatening and intimidating businessmen.

“Baramulla police station received information that some miscreants had set ablaze shops at the local market,” the spokesman said.

The police officer said the five other miscreants, who were involved in sprinkling petrol at some business establishments and intimidating shopkeepers into downing shutters had been arrested from various parts of Srinagar city.

“The arrested miscreants were involved in hurling petrol bombs (Molotov cocktails) and threatening shopkeepers and locals in the interiors of Srinagar city,” the officer said.

Kashmir has been largely shut in the past four months, largely a voluntary response to the scrapping of the special status. There were, however, several incidents where militants or alleged stone-throwers used force to enforce shutdowns.