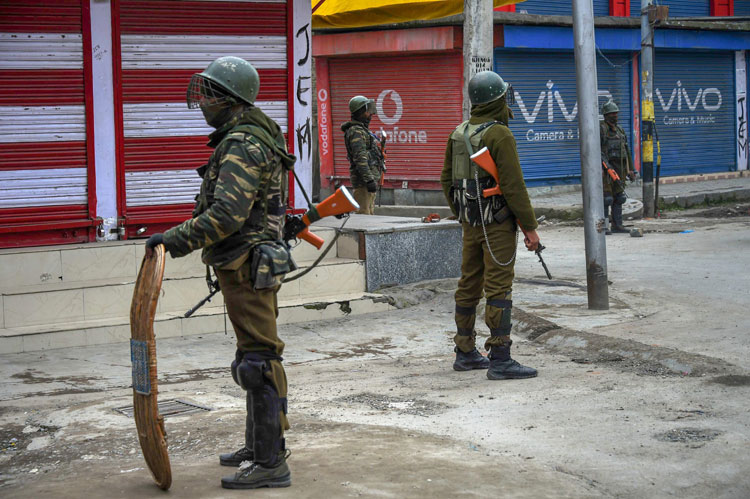 A militant presumed dead sprang to his feet from the debris of a house and fired indiscriminately at security forces in the border district of Kupwara in Kashmir on Friday, killing two CRPF personnel and two policemen.

A civilian also died in firing by security forces on pro-azaadi protesters who had gathered near the site of the operation at Babagund village to disrupt the operation and allow the militants to flee. The operation is continuing.

The security forces had pounded the house, where two militants had taken shelter, with gunfire and mortar shells late on Thursday night.

Police sources said firing had stopped for a long time, giving the forces enough reason to presume that the gunfight was over and the militants had died. But when dozens of security personnel closed in on the house, which had suffered extensive damage, one of the militants rose from the debris and began firing, taking the forces by surprise.

The dead include a CRPF inspector, a jawan and two policemen from the counter-insurgency Special Operations Group. The police identified the slain CRPF men as inspector Pintu and constable Vinod. The deceased policemen are constables Naseer Ahmad Kohli and Ghulam Mustafa.

The encounter began late on Thursday night after a joint team of the army’s 22 Rashtriya Rifles, the CRPF’s 92nd battalion and the police’s SOG launched a cordon-and-search operation in the village.

Fierce clashes broke out between the forces and protesters some distance away, during which security personnel opened fire. A youth from Sopore, identified as Waseem Ahmad, died. Some people were injured.

February was the deadliest month for the forces in many years, with around 50 security personnel losing their lives in militancy-related incidents in Jammu and Kashmir. Forty CRPF personnel died and dozens were injured in Pulwama on February 14 when a suicide bomber rammed his car into a security convoy on Srinagar-Jammu highway.