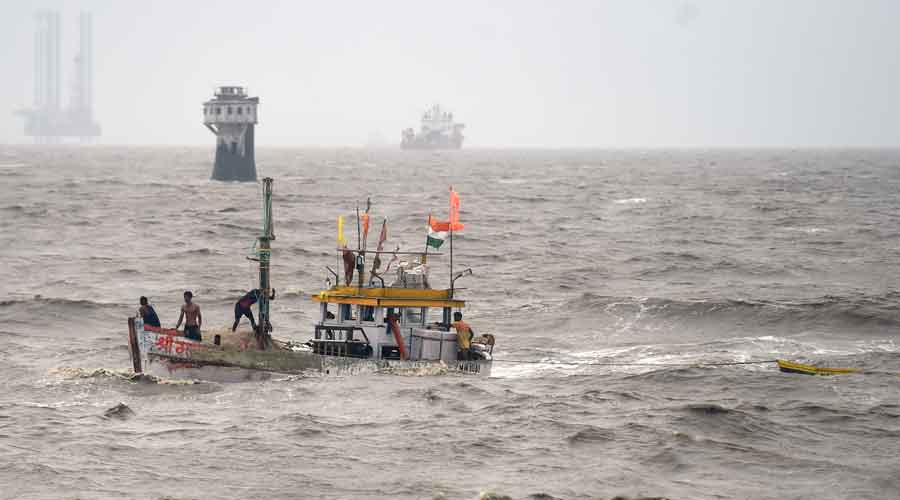 Fishermen on a fishing boat try to recover their smaller boat which had drifted away due to rough sea owing to Cyclone Tauktae, in Mumbai
PTI
Our Bureau   |   Mumbai   |   Published 19.05.21, 02:14 AM

The Indian Navy has mounted a massive air and sea rescue mission for 390 oil workers and crew declared missing or stranded as three barges and an oil drillship started to drift in the Arabian Sea after Cyclone Tauktae barrelled through the west coast on Monday night.

The three barges had been hired by the State-owned Oil & Natural Gas Corporation (ONGC) for a project in the western offshore field while the drillship, the Sagar Bhushan, had been deployed for exploration.

The gravest concern was over the fate of Barge Papaa 305, which sank 35 nautical miles from Mumbai. It had 273 people on board with reports saying that 79 were missing in the churning sea.

The barge belonged to a contractor named Afcons, which is owned by the Shapoorji Pallonji Group.

The rescue for the Papaa 305 was mounted by the naval ships INS Kochi and INS Kolkata supported by Coast Guard vessel ICG Samarth, a tug boat belonging to Afcons and an offshore supply vessel of ONGC.

The two other barges — Support Station-3 (SS-3) and Gal Constructor — also belonged to Afcons and were adrift after breaking anchor.

Reports said the Indian Navy and the Coast Guard vessels had been able to so far rescue 317 of the more than 700 personnel on the four vessels.

The cyclone hit the Gujarat coast but early reports suggested that some of the largest ports in the country like Mundra and Dahej, commercial assets, and manufacturing entities had not been badly affected. (See Page 5)