CPM stands by Cong in House

The Congress had only one companion each time its MPs rushed to the Well of the Lok Sabha last week - the CPM. Barring a couple of Left leaders, the Congress cut a lonely figure when its MPs raised slogans against Narendra Modi. 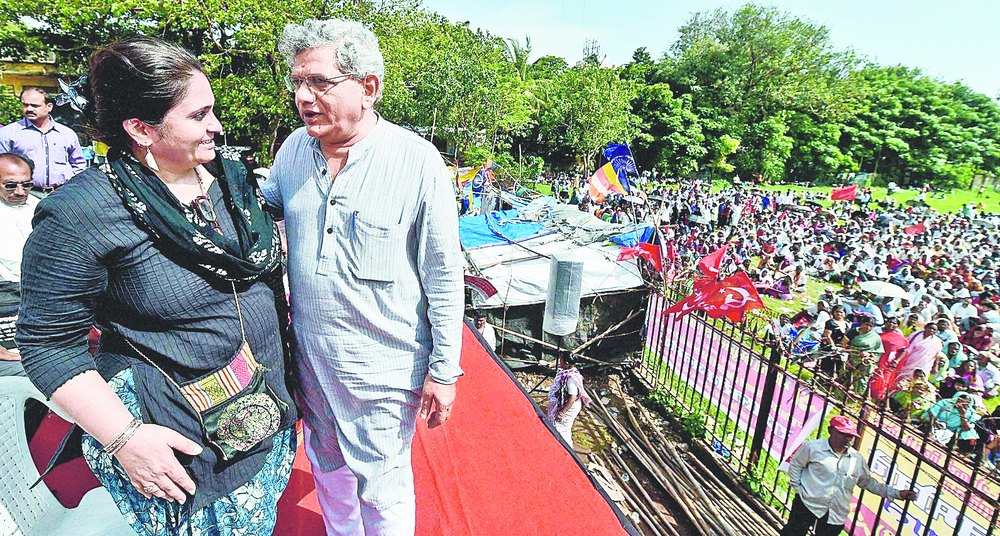 New Delhi, Aug. 1: The Congress had only one companion each time its MPs rushed to the Well of the Lok Sabha last week - the CPM. Barring a couple of Left leaders, the Congress cut a lonely figure when its MPs raised slogans against Narendra Modi.

Although CPM general secretary Sitaram Yechury had ruled out the possibility of an understanding with the Congress when Bengal leader Gautam Deb spoke of an unofficial adjustment, the CPM appears to be informally moving closer to the Congress to fight the BJP.

Not only in the Lok Sabha but in the Rajya Sabha, Yechury has emerged as the principal supporter of Anand Sharma whenever the Congress leader has taken on the treasury benches.

"This BJP government is escaping being accountable behind the veil of conducting a 'debate for a debate's sake'. It is this BJP government that is today, thus, causing parliamentary disruptions," Yechury wrote in an article today in party mouthpiece People's Democracy.

The Congress has decided not to allow Parliament to function till the government sacks foreign minister Sushma Swaraj and the chief ministers of Rajasthan and Madhya Pradesh for their alleged involvement in controversies.

While Sushma and Rajasthan chief minister Vasundhara Raje have got embroiled in the Lalit Modi row, a close aide of Madhya Pradesh chief minister Shivraj Singh Chouhan has been accused of involvement in the Vyapam scam.

After Deb floated the idea of a deal with the Congress, Yechury had ruled out such a possibility following discussions at a state committee meeting in Bengal.

"The CPM's position is very clear. It was decided at our 21st party congress that there is no question of joining a front or an alliance with the Congress. The decision of a party congress is sacrosanct till the next party congress," Yechury had said.

However, in the monsoon session, the CPM has stood by the Congress.

CPM sources said that while the Left could not afford to go for an open alliance with the Congress, it wanted to keep the option of co-operation with the party open.

"What Deb said is a fact. We are indeed not in a position to fight Mamata Banerjee alone," a CPM leader said. "Let's see how things evolve."