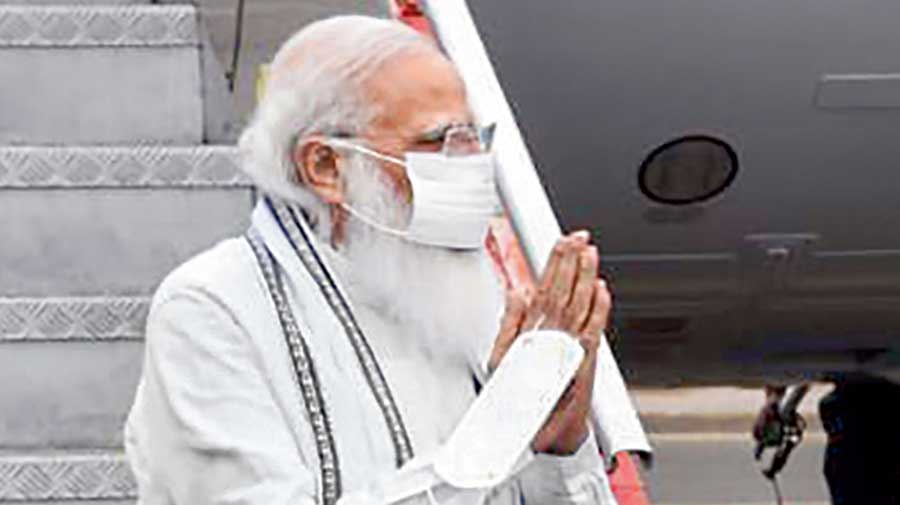 The Supreme Court on Thursday quashed a sedition FIR registered against veteran journalist Vinod Dua in Himachal Pradesh for his criticism of the Narendra Modi government’s handling of Covid and the use of the Pulwama attack and Balakot airstrike to seek votes.

The bench of Justices U.U. Lalit and Vineet Saran upheld citizens’ “right to criticise or comment upon the measures undertaken by the government and its functionaries” and said Dua’s March 30, 2020, statements had neither incited people to violence against the government nor created disorder.

His comments were at best an “expression of disapprobation of actions of the government and its functionaries so that the prevailing situation could be addressed quickly and efficiently”, the court said.

It virtually endorsed Dua’s comment about a lack of testing facilities and protective equipment at the time, rejecting the Himachal government’s charge that these were false claims and had spread panic among migrants.

The court underlined that the migrants’ painful journeys had already begun in a situation that was “alarming” and that Dua may have as a “journalist... showed some concern”.

Dua was accused of saying in a video show that “Narendra Modi has used deaths and terror attacks to garner votes” and of creating panic by “spreading false information that the government does not have enough testing facilities” for Covid.

In the video, Dua did not explicitly say Modi “has used deaths and terror attacks to garner votes”. He had said the Pathankot and Pulwama terror attacks and the Balakot airstrike had been “politicised” to seek votes.

He had also said the government lacked enough testing facilities and had made false statements about the availability of PPE kits. He had added that ventilator and sanitiser exports had been stopped only on March 24, 2020.

An FIR was registered on a local BJP politician’s complaint 37 days after the show — on May 6, 2020 — at Kumarsain police station in Shimla. Dua later petitioned the Supreme Court to quash the FIR, which invoked several Indian Penal Code (IPC) sections such as 501 (printing matter known to be defamatory) and 505 (statements conducive to public mischief) apart from 124A (sedition).

To quash the FIR, the apex court relied on a series of past decisions, particularly the 1962 five-judge constitution bench ruling in the Kedar Nath Singh case that sedition charges can be invoked only if the accused incites people to violence against the State and creates public disorder through his or her statements.

“A citizen has a right to criticise or comment upon the measures undertaken by the government and its functionaries so long as he does not incite people to violence against the government established by law or with the intention of creating public disorder; and that it is only when the words or expressions have pernicious tendency or intention of creating public disorder or disturbance of law and order that Sections 124A and 505 of the IPC must step in,” Justice Lalit, who authored the judgment, said.

“In our view, the statements by the petitioner... can at best be termed as expression of disapprobation of actions of the government and its functionaries so that the prevailing situation could be addressed quickly and efficiently.”

The court said Dua’s statements were not defamatory and could therefore not attract IPC Section 501. It said the allegation that Dua had violated the restrictions imposed under the Disaster Management Act and IPC Section 188 (disobedience to public authority) could not be entertained.

“We are, therefore, of the firm view that the prosecution of the petitioner for the offences punishable under Sections 124A and 505(1)(b) of the IPC would be unjust,” the judgment said.

Section 505(1)(b) punishes those aiming to or likely to cause fear or alarm among the public, thereby inducing someone to commit an offence against the State or public tranquillity.

“Thus, all the offences set out in the FIR, in our considered view, are not made out at all,” the court said.

“Considering the size of the population of this country, the testing facilities to gauge and check the spread and effect of the pandemic, at least in the initial stages of the surge, were not exactly adequate,” the court said.

“If in that light, the petitioner made any comments about testing facilities or PPE suits, N95 masks and masks… those comments in first two statements, cannot be anything other than appraisal of the situation then obtaining. It was not even the case of the respondents (the Himachal government) that these two statements were factually incorrect.”

The bench noted that when Dua made the statements, migrant workers were moving towards their hometowns and villages in huge numbers.

“In the circumstances, there would naturally be some apprehension about the shelter and food to be provided to them en route.... He (Dua) would be within his rights to say that as a journalist he was touching upon issues of great concern so that adequate attention could be bestowed on the prevailing problems,” it added.

“It cannot be said that the petitioner was spreading any false information or rumours. It is not the case of the respondents that the migrant workers started moving towards their hometowns/ villages purely as a result of the statements made by the petitioner. Such movement of migrant workers had begun long before.”

So, Dua’s statements cannot be taken as an attempt to incite the migrant workers to start moving towards their hometowns or villages, nor can they be taken as an incitement to cause food riots, the bench said.

“The situation was definitely alarming around 30.03.2020 and as a journalist if the petitioner showed some concern, could it be said that he committed offences as alleged?” the court asked.

The court, however, dismissed Dua’s plea that any FIR for sedition against a journalist with over 10 years’ experience should be vetted in each state by a committee headed by the high court chief justice or a judge nominated by him or her. The bench said such a provision could be enacted only by Parliament.

But it added a rider: “It must however be clarified that every journalist will be entitled to protection in terms of Kedar Nath Singh, as every prosecution under Sections 124A and 505 of the IPC must be in strict conformity with the scope and ambit of said sections as explained in, and completely in tune with the law laid down in Kedar Nath Singh.”

Supreme Court Bar Association president Vikas Singh, who successfully defended Dua, told The Telegraph that Delhi High Court had last year stayed an FIR registered against the journalist in the capital over the same set of comments.

Since the Supreme Court was hearing the Himachal case, the high court had refrained from passing any directions. Singh said that with the apex court giving its decision, the decks were now clear for the high court to pass its verdict.

Hurrah: Criticism is not criminal