Advertisement
Home / India / Covid: Dead having to queue at ‘smashan’ and ‘kabristan’

Corruption seems to be making no distinction between the two, as relatives bribe to get space for burial or electric furnace for cremation 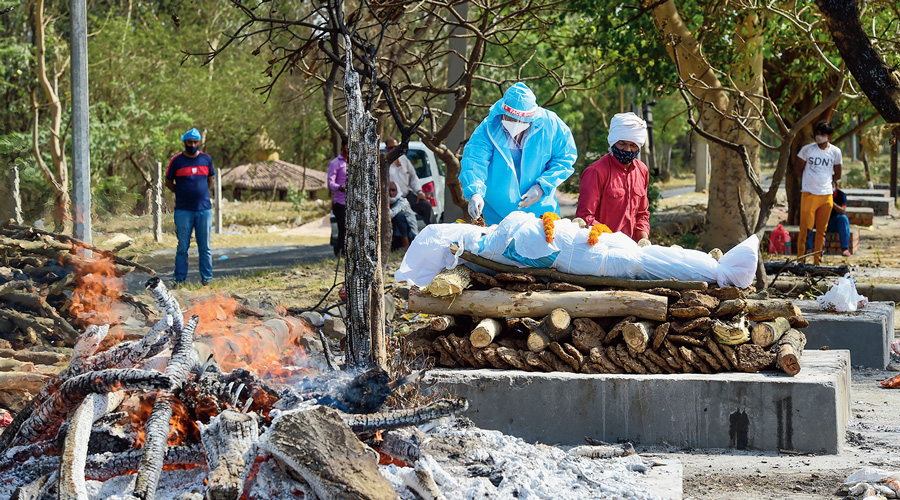 A man wearing PPE performs the last rites of his mother who died of coronavirus at the Ghaziabad Cremation Ground in Ghaziabad district of Uttar Pradesh on Monday.
PTI photo
Piyush Srivastava   |   Lucknow   |   Published 20.04.21, 02:20 AM

Prime Minister Narendra Modi had pitted 'smashan' against 'kabristan' in a polarising election speech in Uttar Pradesh. The coronavirus is treating them the same, killing both Hindus and Muslims in large numbers.

The dead are having to queue not just at Lucknow’s two electric crematoriums — turned into smashans (traditional cremation grounds) by rows of burning pyres — but also at the city’s half-dozen kabristans (Muslim graveyards).

On Monday, 44 graves were dug between 4am and late afternoon at Aishbagh Kabragah in the heart of Lucknow.

“I’ve asked my family to send my lunch and dinner here. I won’t be able to go home the next few days, if not weeks,” said Manjit Kushwaha, 40, a Hindu gravedigger employed at Aishbagh for the past three years.

“The number of the arriving dead has multiplied three to four times over the last six-seven days. We have talked to the families — it’s clear that most died of Covid.”

A Covid grave takes longer to dig, for the government has specified it must be six to eight feet deep in contrast to a normal grave that is four to five feet deep.

Graveyard caretaker Hafiz Mateen said: “Soon there will be no space for more graves. We had never before faced such a horrible situation. Relatives of the dead are being forced to wait hours for their turn.”

The situation is the same at the Suppa, Nishatganj, Dalibagh and Khadra graveyards in Lucknow.

Hafiz Salimuddin, an employee at the Suppa graveyard in Haidarganj locality, said: “From two or three a day, we are receiving a dozen bodies in 24 hours. Soon, there will be no space left.”

Usman Ali Shah, caretaker at the Dalibagh graveyard, said: “From 20 bodies a month, we are receiving 20 bodies a week.”

A combined average of 140 bodies is arriving daily at the city’s two crematoriums, which can together burn barely 120 bodies a day. Their three electric incinerators have a maximum combined capacity of burning 72 bodies a day, while the rest are burnt on pyres. So, bodies are piling up.

Corruption too seems to be making no distinction between smashan and 'kabristan'.

A relative of a dead person, seeking anonymity, alleged the graveyard authorities are seeking bribes to provide space. “We paid Rs 5,000 and still had to wait three to four hours,” he said.

Tuhin Shekhar, who had visited the Baikunth Dham crematorium on Monday to attend a neighbour’s funeral, said: “You need to pay between Rs 20,000 and Rs 30,000 to speed up the cremation. This includes Rs 7,500 for the firewood to prepare a pyre, although Nagar Nigam officials claim the total cost of firewood and other material shouldn’t be more than Rs 4,500.”

Modi had dog-whistled the cremation ground-graveyard distinction at an Assembly election rally in Fatehpur on February 19, 2017.

“If a 'kabristan' is built in a village, a smashan should also be constructed there,” he had said, implying the then state authorities favoured Muslims.

The state government, ruled by Modi’s party, seems to be continuing with the smashan-kabristan distinction. While both crematorium complexes have been fenced on all sides with tin sheets — apparently to hide the ugly Covid truth from people — officials said there were no such plans for the graveyards.

Muslims make up 28 per cent of Lucknow’s population of 37 lakh.