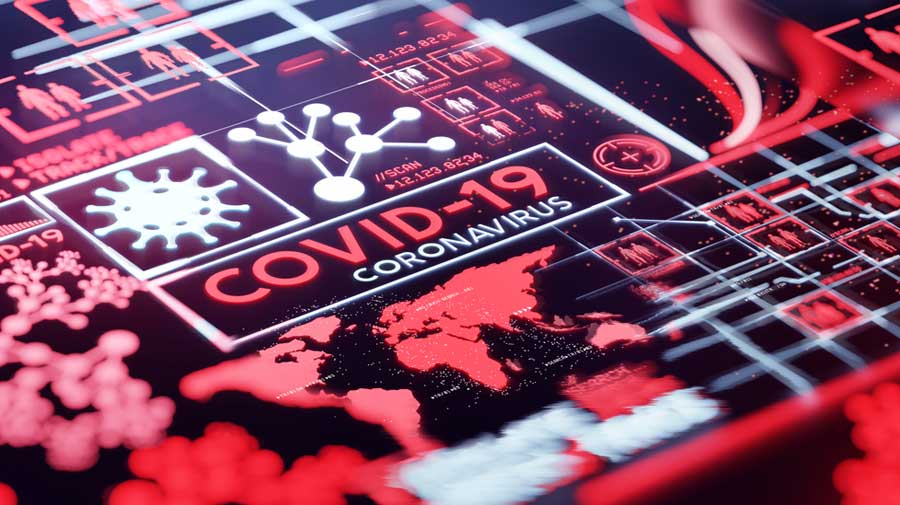 “Data dashboards would allow district authorities to monitor the state of the epidemic and control a future surge before it gets too big,” said Manoj Murhekar, the director of the NIE, a unit of the Indian Council of Medical Research (ICMR).
Shutterstock
G.S. Mudur   |   New Delhi   |   Published 14.06.21, 01:27 AM

Government researchers have urged districts across India to establish data dashboards to control any future Covid-19 surges and curb deaths amid suspicions that gaps in statistics have handicapped responses and contributed to undercounts of infections and casualties.

The NIE guidance comes at a time India’s second Covid-19 wave is receding with daily new cases in a near-steady fall since May 6. But health officials and experts have cautioned that localised surges or even a nationwide wave may reappear if large susceptible pools of people are exposed to the virus.

“Data dashboards would allow district authorities to monitor the state of the epidemic and control a future surge before it gets too big,” said Manoj Murhekar, the director of the NIE, a unit of the Indian Council of Medical Research (ICMR).

The NIE has described data dashboards as among the “weakest components” of India’s Covid-19 response, echoing concerns among sections of researchers who say the handling of the epidemic could have been better and counts of deaths more reliable through better data management.

The Union health ministry had up to Sunday recorded 370,411 Covid-19 deaths, but some health researchers, citing anecdotal evidence of overcrowded crematoriums and funeral sites and bodies dumped into rivers or relying on theoretical estimates, have suggested in recent weeks that India has vastly undercounted Covid-19 deaths.

Over the past week, Bihar and Maharashtra have reclassified earlier deaths as Covid-19 deaths, amplifying suspicions that many deaths in the country have not been documented as caused by the coronavirus disease.

The Union health ministry has asserted that it has consistently directed states to correctly record deaths with emphasis on a “robust reporting mechanism for monitoring district-wise cases and deaths on a daily basis”. States consistently reporting low deaths were asked to recheck data.

But the ministry also said “there shall always be differences” in deaths recorded during a profound, prolonged public health crisis such as Covid-19 and well-conducted studies on excess mortality, done when mortality data is available from reliable sources”.

The NIE has said all deaths should be counted, “irrespective of the cause” every week and the data analysed by age, gender, rural and urban, and dashboards updated. It has also recommended that every death be audited to identify gaps in surveillance, testing, transport, or treatment.

“It is good to see recommendations highlighting efficient data management — how we’ve used data during the epidemic remains a blackbox,” said Oommen John, a senior physician and research fellow at The George Institute for Global Health, New Delhi.

John and others have expressed concern that while the ICMR and the National Centre for Disease Control, New Delhi, have collected data on testing and clinical outcomes through the epidemic, it is unclear how the information has been used to guide public health responses.

Sections of doctors and researchers have pointed out that there still isn’t clear data to help determine whether there were any differences in the disease characteristics between India’s first wave and the second surge, dominated by new variants.

“We need comparisons of epidemiological and clinical data across the two waves,” said Gagandeep Kang, professor of clinical microbiology at the Christian Medical College, Vellore.

“We need information about how did the earlier versions of the virus behave versus the new ones. We need information on how many died and after how many days. Without access to epidemiological, clinical and molecular data, we cannot have a full picture about the differences between the two waves,” Kang added.

John said: “While India aspires to be a data-driven economy, this was an opportunity to leverage robust data science approaches, use it to guide our responses and demonstrate our capability in public health informatics — but it looks like we squandered it away.”

The NIE’s control strategy would require districts to intensify restrictions and enhance physical distancing measures as the test positivity rate (the number of positive cases among those tested), percentage change in seven-day average of daily new infections and bed-occupancy increase.

Irrespective of the other parameters, a district would need to go into a “full lockdown” with only essential services functioning when the oxygen or intensive care unit bed occupancy there exceeds 75 per cent.

However, it has recommended lower levels of restrictions when the test positivity rate exceeds 5 per cent, or if percentage change in the seven-day average increases from the previous week, or if bed occupancy rises beyond 50 per cent.

The NIE, outlining infrastructure requirements, has said districts should prepare for 15 oxygen beds and two intensive care unit or ventilator beds for every 100 active cases, and three ambulances for every 100 new infections, assuming 25 per cent patients would require hospitalisation.