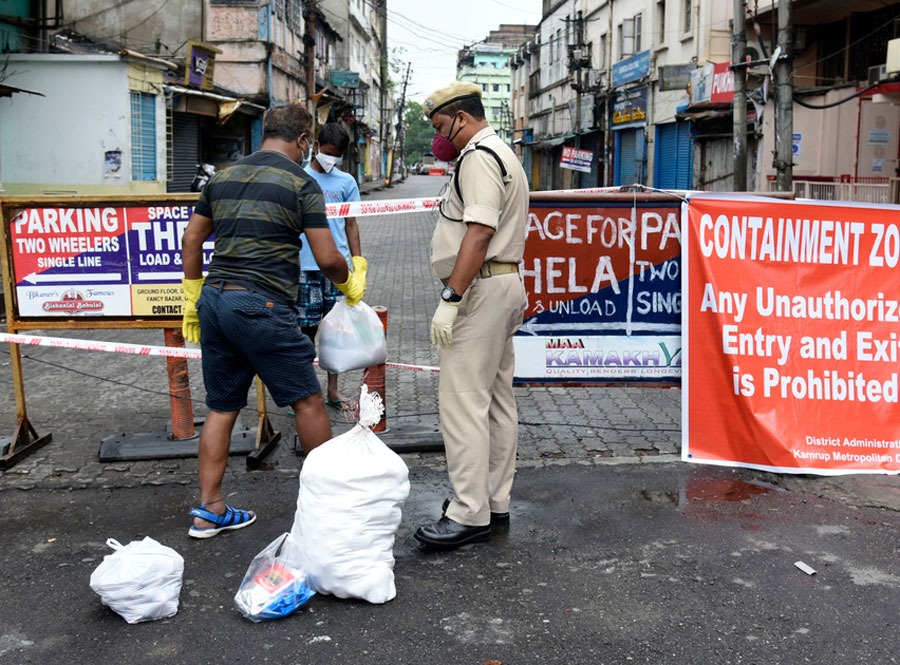 Health researchers have predicted for months that when a sufficiently large proportion of people get protected either through natural infections or through vaccines, the epidemic will slow down because each protected person serves as a barrier to further spread of the virus.
Shutterstock
G.S. Mudur   |   New Delhi   |   Published 20.11.20, 05:48 AM

Medical researchers have documented for the first time in India fewer new cases of the coronavirus disease in urban areas with large proportions of previously infected people, a sign of emerging population-level protection without a vaccine.

The researchers have cautioned that their findings report an epidemiological phenomenon anticipated to occur but hitherto unrecorded with Covid-19, and should not lead to any laxity in precautions such as masks, physical distancing and avoiding crowds.

The study, posted on a preprint server but not peer-reviewed yet, has also found neutralising antibodies targeting SARS-CoV-2 in 85 per cent of the people with antibodies to the virus, an indication of at least temporary protection from the virus.

Health researchers have predicted for months that when a sufficiently large proportion of people get protected either through natural infections or through vaccines, the epidemic will slow down because each protected person serves as a barrier to further spread of the virus.

Some experts have speculated that the overall decline of India’s epidemic since mid-September could be a sign of community-level protection emerging in some states — such as Maharashtra — resulting from large proportions of already infected people.

“This is a well-executed study, but the correlation between antibody prevalence and new cases is as expected,” said T. Jacob John, an infectious disease specialist. who was formerly at the Christian Medical College, Vellore. “The real question is how long the protection will last.”

US researchers had earlier this month reported detecting “immune memory” in over 90 per cent of a sample of infected people for five months or longer, indicating “durable immunity” against Covid-19 in most individuals.

Ghose and his colleagues hope to conduct follow-up studies on the duration of immunity.

“We see a very good protective response in 85 per cent of people across all age groups — even older people show this response, which is very good,” said L.S. Shashidhara, professor of biology at Ashoka University in Sonipat (Haryana) and a team member. “But our findings also raise questions — how long will the immunity last, and why do 15 per cent of people don’t show the protective neutralising antibodies? These are the questions we need to probe.”

The duration of the protection has implications for vaccines — when they become available. Members of the Centre’s expert panel on Covid-19 vaccines had told The Telegraph last month that antibody profiles of people could be used to determine who needed or did not need vaccines. People who already display a strong protective immune response need not be prioritised for vaccines, one official said.

Ghose said he hoped the Pune study would serve as a template for cities and states across India and for other countries with large and diverse epidemics. “Such studies provide insights into both population-level protection and individual protection,” he said.

The Union health ministry on Thursday recorded around 45,000 new cases after a steady fall since mid-September, when the daily new cases had climbed to over 90,000. Around 443,000 patients are under medical supervision and 131,578 have died.

The new cases from high seroprevalence areas are in line with expectations that even after a sufficiently large proportion of the population is infected and the epidemic slows or stops, a steady trickle of new cases will continue to emerge.