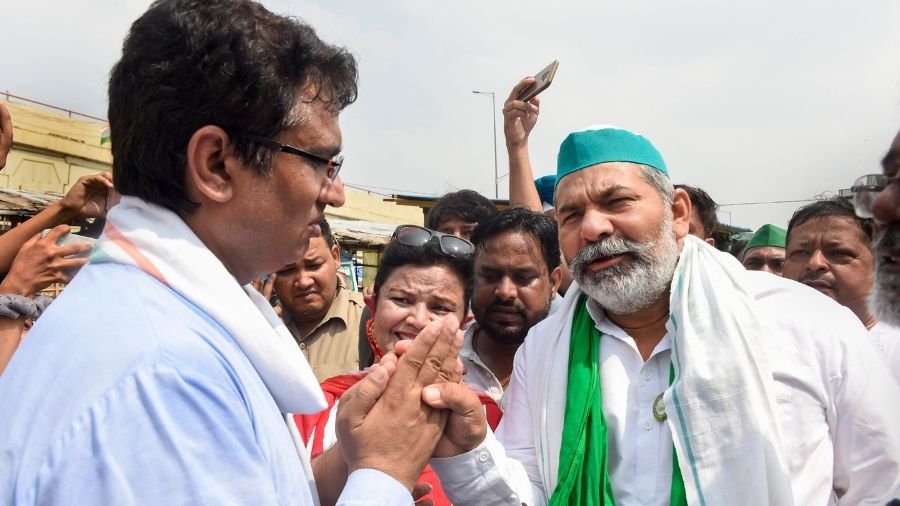 The countrywide response to Monday's Bharat Bandh has proved that the protests against three farm laws of the Centre are pan-India, Bharatiya Kisan Union (BKU) leader Rakesh Tikait said and urged the people who faced inconvenience due to the shutdown to forget it for the farmers' sake.

He said people from not just three states (Haryana, Punjab and Uttar Pradesh) but across the country participated in the shutdown called by the Samyukta Kisan Morcha (SKM), an umbrella body of over 40 farmer unions leading the protests against the three contentious laws, from 6 am to 4 pm and no violence was reported from anywhere.

"Some people had described the protest as an issue of farmers only in three states (Punjab, Haryana and Uttar Pradesh). But the response and support to today's bandh across the country has proved that it is a pan-India protest," the national spokesperson of the BKU, part of the SKM, said.

The 10-hour shutdown led to several trains being cancelled, highways and key roads blocked and thousands stranded for hours in parts of the country, particularly in the north.

"Some people may have faced inconvenience due to the Bharat Bandh today, which is natural, but they should forget it for just one day in the name of farmers," Tikait said in a statement.

"The farmers have been on the roads, leaving their houses for the last 10 months, but the blind and deaf government neither sees nor hears anything," he was quoted as saying in the statement issued by BKU media in-charge Dharmendra Malik.

Tikait said in a democracy, there is no other option but to protest and warned the government that the farmers would go back to their homes only after the laws are abolished.

"It is an appeal to our government that the problems of the farmers should be resolved as soon as possible," he added.

The influential BKU leader said the 10-month-long protests can end today if the government agrees to the farmers' demands and urged the Centre to look into the issue at the earliest.

He thanked farmers and workers across the country for making the shutdown a complete "success" and said the movement will continue till the three laws are repealed and a legal guarantee provided by the Centre on the Minimum Support Price (MSP) on crops.

"The Bharat Bandh called by the SKM today has been a complete success. Farmers across the country came out on the roads and expressed their anger against the laws. At thousands of places, people came out in support of the bandh and staged demonstrations.

He also hit out at the BJP government in Uttar Pradesh over the Rs 25 per quintal hike on the MSP for sugarcane announced last week and said a separate agitation would be carried out by the BKU over the issue in the coming days.

Tikait is leading hundreds of anti-farm law protesters and BKU supporters at Ghazipur on the Delhi-Uttar Pradesh border, one of the three key protest sites on the outskirts of the national capital, since November last year.