Till Friday, 16 COVID-19 cases have been confirmed in state 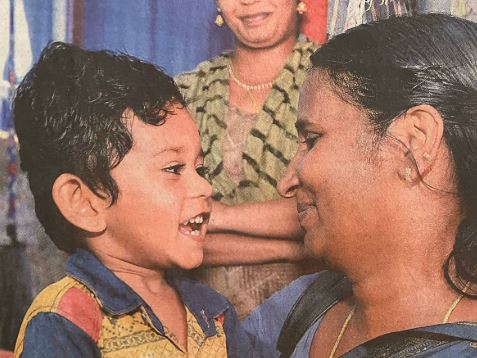 A photo of an Anganwadi teacher visiting a child at home while distributing food from the mid-day meal scheme, published in Malayala Manorama has been applauded and shared widely on Twitter.
Scan of Malayala Manorama
Abhirup Dam   |   Published 13.03.20, 11:42 AM

The Kerala government, which has shut down schools to prevent the rapid spread of coronavirus, has however decided to continue with the mid-day meal system, wherein food is now being distributed to the homes of students.

A photo of an Anganwadi teacher visiting a child at home while distributing food from the mid-day meal scheme, published in Malayala Manorama, has been applauded and shared widely on Twitter.

The decision to continue with mid-day meals was taken at a special cabinet meeting on Tuesday, where chief minister Pinarayi Vijayan decided to shut down schools.

The state government is now keeping up its promise, ensuring that that these meals are delivered to the homes of children.

'Kerala, a state of 34m in southern India, is now home-delivering midday meals to pupils whose schools have been shut due to COVID-19. Somehow between tracing contacts, quarantining people, and slowing the spread of the virus, their Communist-led government thought of this, too,' tweeted Saugato Datta, managing director of non-profit 'Ideas42' and formerly associated with The Economist magazine.

Vijayan announced on Thursday that the government was working with internet service providers to increase connectivity by 30-40% in the state to meet surge in demand.

Kerala, which has one of the most successful mid-day meal schemes in the country, serves an approximate 25, 84,156 students across 2327 schools (National Programme of Mid Day Meal in Schools: Annual Work Plan and Budget 2018-019, Kerala).

The state believes in feeding school-going children from nursery classes to seventh standard. The meals also act as incentive for children from an unprivileged background to attend schools.

Typically, the meals include rice, pulses, vegetables, eggs, banana and 150 ml milk twice a week. The plan to include fruits is underway. Kerala has allocated 14.6 per cent of its expenditure on education at ₹20,862 crore in 2020-21, Mint reported.

Till Friday, 17 coronavirus infections have been confirmed in the state, including three people who have recovered completely. As many as 4,180 people are being kept under observation, of whom 3,910 are in homes and the remaining 270 are in isolation in hospitals across the state.

The state government is also delivering food to people who are under observation. Patients who’ve been treated for COVID-19 in isolation wards say they were provided the food of their choice, wifi as well as counselling to reduce stress.