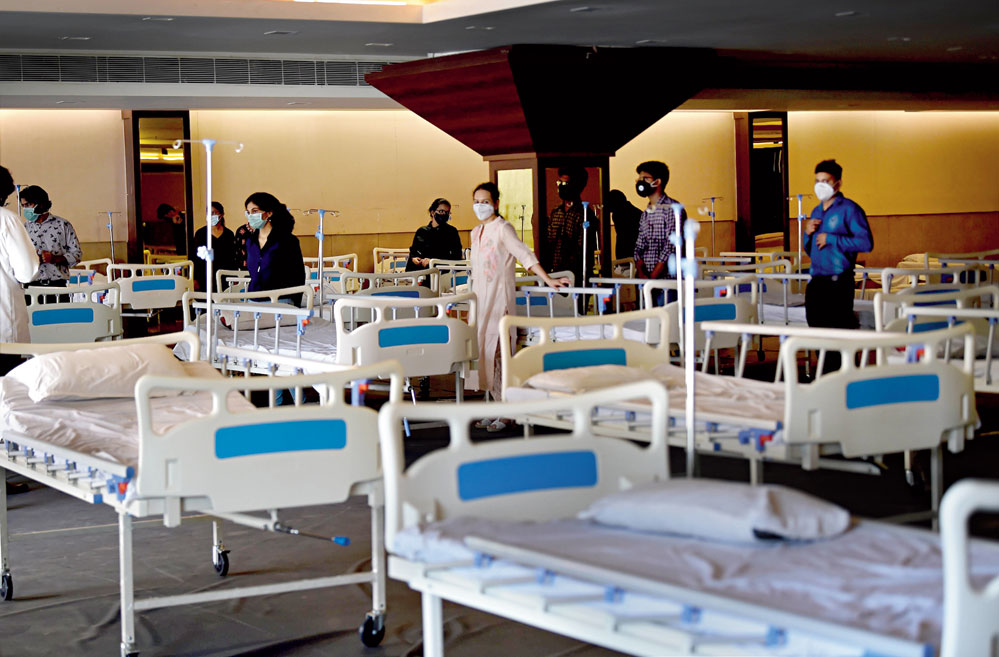 New beds being readied at Shehnai Banquet Hall opposite LNJP Hospital in New Delhi on Saturday. The hall has been temporarily converted into an isolation centre for Covid patients.
(PTI)
Our Special Correspondent   |   New Delhi   |   Published 21.06.20, 01:04 AM

India on Saturday recorded yet another single-day high of 14,516 new coronavirus disease cases, amid an increase in the country’s case fatality rate among Covid-19 patients from 2.8 to 3.3 per cent over the past week.

The jump is due to an unusual single-day spike of 2,003 deaths recorded on June 16, which is more than five times higher than the average of 300-plus deaths daily over the past week. The spike was attributed to reclassification of earlier deaths in Maharashtra and Delhi to Covid-19.

Public health experts say the differences as well as changes in the CFR can result from any of multiple factors — the age distribution of the cases, patterns of underlying chronic health disorders, as well as the quality and timeliness of diagnosis and clinical care.

The Union health ministry said on Saturday that the country’s recovery rate — the number of patients who have been declared recovered divided by the number of lab-confirmed cases — has increased to 54.13 per cent. The recovery rates were 53.79 on Friday and 52.96 on Thursday.

Epidemiologists say the epidemic remains on an exponential trajectory with states showing different growth rates that could, however, change in the coming weeks, depending on precautions taken by the public and the opportunities the virus gets to spread.

An analysis by researchers at the Institute of Mathematical Sciences, Chennai, up to June 14 had suggested that the nationwide R — a measure of how quickly the virus is spreading — had dropped slightly to 1.13 from an earlier value of 1.22.