Covid: Space runs out for graves in Bhubaneswar

With casualties mounting, a cemetery located in the heart of the city is struggling to cope with the rush of bodies 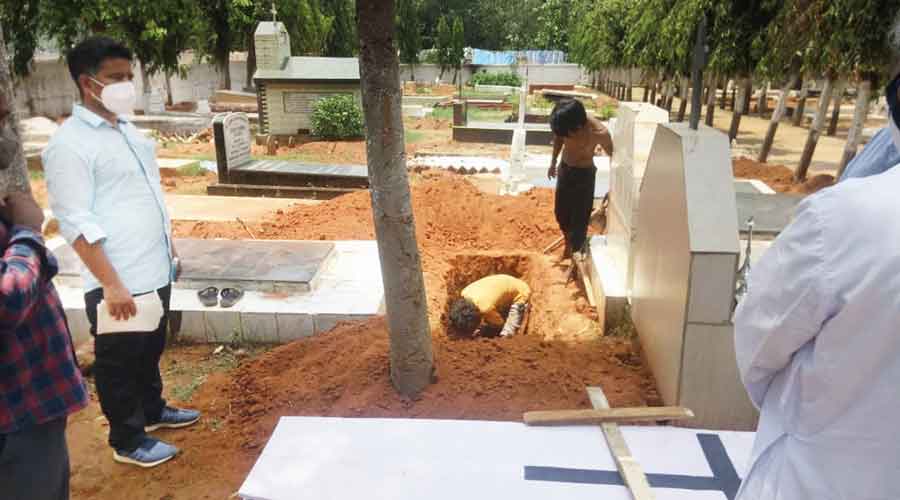 The second wave of Covid-19 has brought to light harrowing images from across the country of bodies of victims lined up outside crematoriums or graveyards with families waiting for hours to perform the last rites of their loved ones.

With casualties mounting, the cemetery located in the heart of Bhubaneswar is struggling to cope with the rush of bodies.

Spread over an acre, the cemetery has graves dug up in every plot of available land. “It’s painful to show disrespect to the soul of the man who has departed from the world unexpectedly and in pain because of Covid-19. But given the large number of bodies coming for burial, we find ourselves completely helpless,” said Father Dibkahar Parrichha.

Bhubaneswar has only one cemetery that caters to the Christian community. “Suddenly the number of deaths has risen because of Covid-19. People from as far as Sundergarh come here for treatment and their family members often die in hospitals here. The relatives bring these bodies to the cemetery in Bhubaneswar. This is an important reason why the pressure on the cemetery has gone up,” said Father Bhaskar Parrichha.

He pointed out that the cemetery was planned when the population of Bhubaneswar was around one lakh. Now the population of the city has increased exponentially and the number of faithful has gone up accordingly, he added.

“We have asked the state government to allot us land at other places on the outskirts of the city for burial. Almost six years have passed but we are yet to hear from the government,” he said.

Tombstones at the cemetery

Hemanta Kumar Nayak, the relative of a Covid victim, said: “My uncle Bijay Kumar Nayak, who was a priest in a church in Jatani, passed away last Sunday. When we brought his body for burial, the situation at the cemetery was horrible. We didn’t know where to bury him. As per tradition, we have to give respect to the departed soul. We believe in resurrection. But now there is no space to even to keep the coffins properly, forget about funeral rites.”

He added: “As per tradition, the bodies need to be lined up. But such is the situation at the cemetery that they are being placed one upon another. The gap between the graves is also shrinking due to lack of space. We have never witnessed such a situation. We used to come once a year to place flowers on the graves of our relatives. But now even that does not seem to be possible.”

The cemetery, the graveyard and the crematorium are located adjacent to each other at Satyanagar here.

There are similar problems in burying the dead in the graveyard (kabaristhan). “No space. Such is the situation that people sometimes dig up old graves, take out the remains and bury bodies. This happens in a hush-hush manner. It’s a terrible situation,” alleged S.K. Nizamuddin, former corporator of the Bhubaneswar Municipal Corporation.

The problem of cremation has acquired serious proportions as well. “Such is the flow of bodies to the crematorium that sometimes there is lack of space even for performing rituals before the bodies are put in the incinerator. Sometimes the incinerator’s chimney does not work and people have to arrange firewood to cremate the bodies,” said retired state government employee Prashant Mohanty.

He said there is invariably a queue outside the crematorium these days with authorities calling out names of people waiting to cremate their family members or loved ones to ensure order. “I have visited this crematorium several times since my childhood but I have never seen such desperation, frustration and even fear among people. They are really scared,” he said.

Mohanty referred G.N. Devy’s column published in The Telegraph on May 31 to describe the prevailing situation. “What we are facing is not just an individual’s tragedy: it’s a large, unprecedented and universal catastrophe, a nakba or nauba,” Mohanty said quoting Devy (Nakba means a great catastrophe or a phenomenal disaster, while nauba means a situation or a condition inviting catastrophe).